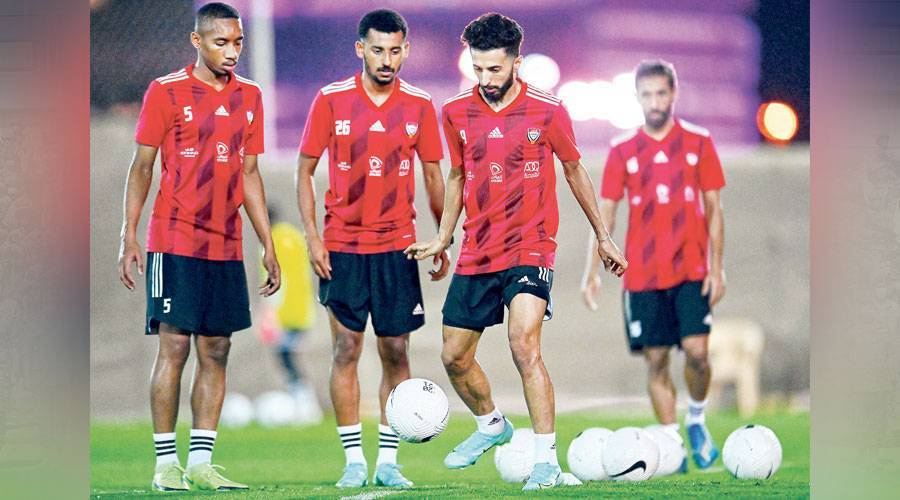 Sheikh Rashid bin Humaid Al Nuaimi, President of the UAE Football Association, called on fans of the UAE national team to prepare to support him when the joint Asian qualifiers for the 2022 World Cup and the 2023 Asian Cup finals begin on June 3.

After the conclusion of the Football Association’s meeting on Sunday, Sheikh Rashid bin Humaid said: “Based on the success of the mass attendance in the President’s Cup final, coordination was made with the concerned authorities, and the mass attendance of the qualifiers was approved, so everyone is invited to support Al-Abyad in this important entitlement.” .

The Emirates national football team continued its series of daily preparations in the sub-field of Al-Wasl Club, in preparation for the qualifying matches, for the seventh group, which will start from next Thursday, when Al-Abyad faces its Malaysian counterpart at Zabeel Stadium.

The team performs its training with full force and seriousness under the leadership of the Dutchman Van Marwijk, who has developed an integrated program for the qualifiers that includes theoretical and video lectures, individual meetings with the players, and exercises in the gym at the hotel, in addition to the training sessions that witness the participation of all players who are fully prepared technically, physically and mentally. to enter the playoffs.

The team’s midfielder, Abdullah Ramadan, who appeared remarkably this season and contributed alongside his colleagues to crowning his team Al-Jazira with the Arab Gulf League shield, confirmed that Al-Abyad’s preparations for the joint qualifying matches are going very well in all respects, and the general atmosphere surrounding the team bodes well.

He said: “The players are up to the challenge, and everyone is determined to change the image in which the team appeared in the last stage of the qualifiers, which witnessed fluctuations in results, but the current period is completely different, and everyone is ready to give their utmost in order to win and compete strongly to grab the card. qualified for the decisive role.

National team defender Shaheen Abdel Rahman expressed his optimism about the national team’s ability to overcome the current stage and cross to the next stage of the joint qualifiers, noting that this optimism comes based on what the technical staff, led by coach Van Marwijk, and the players provide, during training sessions and past friendly matches that appeared. In it, “The White” with a high technical level, and was able to achieve great results, especially over India and Jordan.

On the other hand, the application of the “medical bubble” system will be started on all delegations of the participating teams, qualifiers organizers, referees and those concerned from Monday until the end of the qualifiers, where everyone will be subject to periodic and continuous examinations, and the movement process will be limited to between the delegations’ residence and training and matches stadiums only .

This step comes within the Emirates Football Association’s keenness on the safety of members of the technical and administrative bodies, players for the national teams, the AFC delegation, referees and all the organizers, especially that the experience witnessed great success during Sharjah’s hosting of the matches of the second group of the AFC Champions League recently.