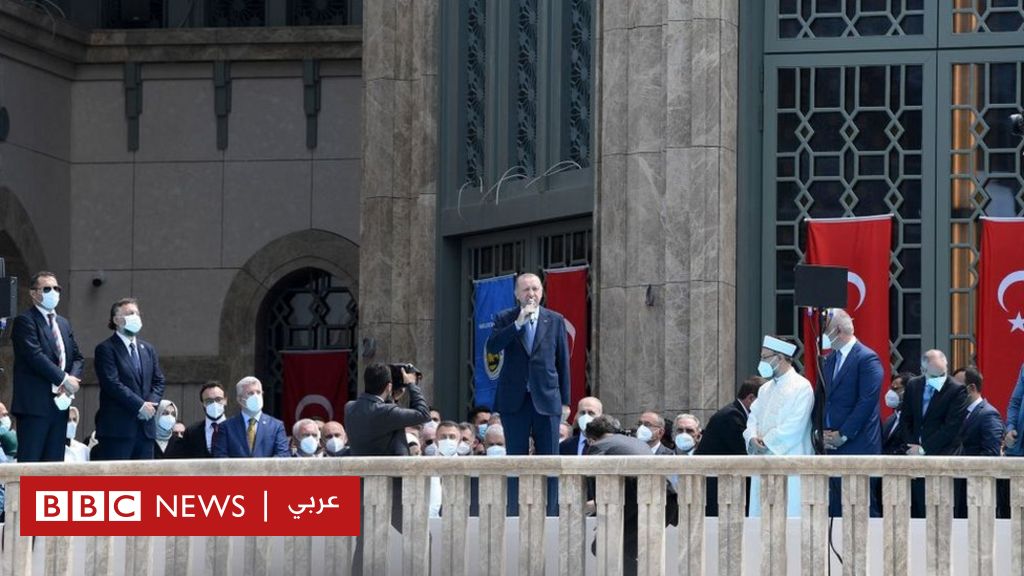 Turkish President Recep Tayyip Erdogan on Friday inaugurated the first mosque in Istanbul’s famous Taksim Square, which is traditionally seen as a symbol of the Turkish republic’s secular values.

Erdogan said after performing Friday prayers that “the Taksim Mosque now occupies a prominent position among the symbols of Istanbul… it will remain, God willing, until the end of time.”

The opening was met with enthusiasm by many, as several thousand prayed in its outer court after the mosque quickly filled, according to Agence France-Presse.

About 4,000 people will be able to pray inside the mosque, which combines Ottoman style with contemporary features.

Erdogan first championed the mosque building project when he was the city’s mayor, a dream he has had for 30 years.

When Erdogan served as mayor of Istanbul in the 1990s, he lamented the lack of a mosque in Taksim Square, noting that the only visible religious site was an Orthodox church a few steps away.

“There was not even a prayer room, and the faithful had to content themselves with praying on newspaper papers on the ground,” Erdogan said at the mosque’s opening.

The mosque now dominates the Republic Monument, which represents important figures in the Turkish war of independence, including Mustafa Kemal Ataturk.

Erdogan decided to open it on the anniversary of the start of the large anti-government protests in 2013, known as the “Gezi movement”, which was the center of Taksim Square, and was met with a harsh response from the police.

The inauguration also comes a day before the anniversary of the Ottomans’ capture of the city, then known as Constantinople, in 1453.

The construction of the mosque, which began in 2017, has not been without criticism, with some accusing Erdogan of wanting to “Islamize” the country.

Erdogan often presents himself as transforming the country with new airports, hospitals, roads, and grand mosques.

A larger mosque was opened on top of Istanbul’s Çamlıca Hill in 2019, which can accommodate up to 60,000 worshippers.

The mosque can be seen from almost anywhere in the city, in the style of the Ottoman sultans who built mosques that remained after their death.

Erdogan commemorates the anniversary of the entry of the Ottomans into Constantinople on Saturday at the Çamlıca Mosque.

A group of observers believes that the new mosque is part of the Turkish president’s attempt to satisfy his religious and conservative electoral base during a period of increasing economic hardship.

Experts see that among his efforts is the re-conversion of Hagia Sophia into a mosque to calm his base, while opinion polls show a decline in support for Erdogan’s ruling party, the Justice and Development.

The Hagia Sophia is on the UNESCO World Heritage List, and was originally the main cathedral of the Byzantine Empire.

According to a survey conducted by the Turkish polling institute “Metropol”, the AKP’s approval rating has fallen by 33% since the last elections in June 2018.

Currently, Erdogan is facing allegations, Sedat Bakr, a mafia boss on YouTube, which was watched by tens of millions, in which the latter accuses prominent figures in Turkey of involvement in murders, rape, corruption and drug smuggling for decades.

Erdogan has rejected Bakr’s allegations, insisting that he is leading a war on organized crime gangs and will bring their leaders to justice.