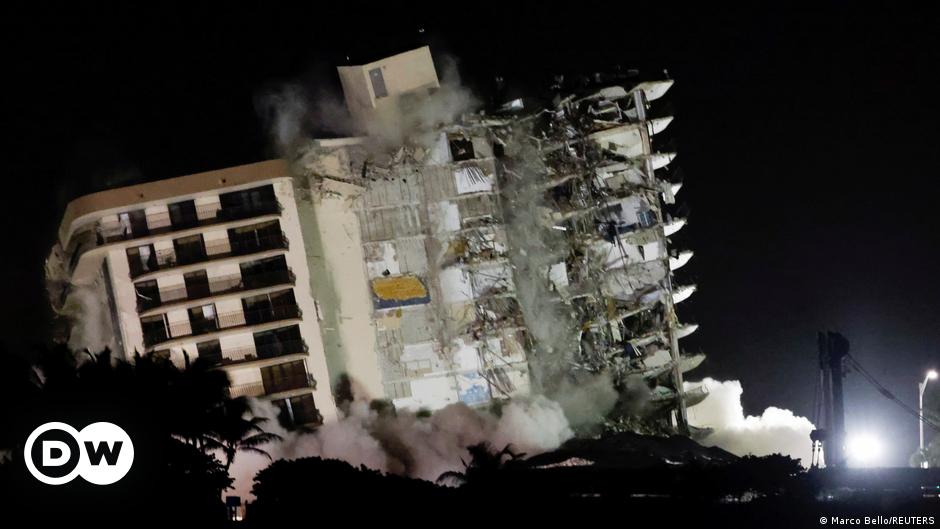 The ruin’s instability was dangerous and hampered the progress of the rescue operation in the rubble of the wing that collapsed 11 days ago, Miami-Dade County Mayor Daniella Levine Cava previously said. The parts of the high-rise building in Surfside north of Miami Beach that were still standing were also threatened with collapse due to the “Elsa” storm.

This, in turn, posed a hazard to salvage crews as they searched the rubble for victims, Cava explained. However, the salvage operation will continue as soon as sections of the accident site are safe after the blast and the storm.

Residents in the Surfside, Florida neighborhood were warned prior to the blast to stay indoors and keep doors and windows closed to keep dust and small particles out.

The search and rescue operation in the rubble, under which buried people are suspected, was interrupted on Saturday. It was to be restarted and expanded after the blast. However, there is little hope of finding survivors in the ruins.

The debris disappears in a huge cloud of dust

After the accident, the residents of the still standing part of the building were not allowed to return to their apartments for safety reasons – not even to take out personal belongings. Authorities initially said the demolition work could take several weeks.

The demolition was finally brought forward out of concern for the stability of the ruins due to the approaching tropical storm. The storm “Elsa” with possibly violent gusts of wind and heavy rain is expected in southern Florida from Monday evening.

Cause of collapse unclear

The affected 12-story Surfside complex known as the Champlain Towers partially collapsed on the night of June 24. The exact cause of the accident is still unknown. However, a report in 2018 had already identified “major structural damage” to the building with around 130 residential units, which was completed in 1981, as well as cracks and crumbling in the basement. An expert attributed much of the damage to the salty sea air. However, he did not write that the building was in danger of collapsing.

Remains of the ruins after the blast, covered with tarps

Since the building collapsed, sniffer dogs, special cameras and heavy equipment had been used almost around the clock to search for people who had been buried. In the meantime, 24 bodies have been recovered. More than 120 people are still missing, although it is unclear how many of them were actually in the building near the beach at the time of the accident.

Hurricane Elsa has already left a trail of devastation in the Caribbean: three people died in the Dominican Republic and in Santa Lucia. The authorities in Jamaica and Cuba warned of floods, squalls and mudslides. Hundreds of homes were damaged in Barbados. Several people lost their lives.

Jennie Nguyen promises to ‘speak my truth’ after ‘RHOSLC’ firing