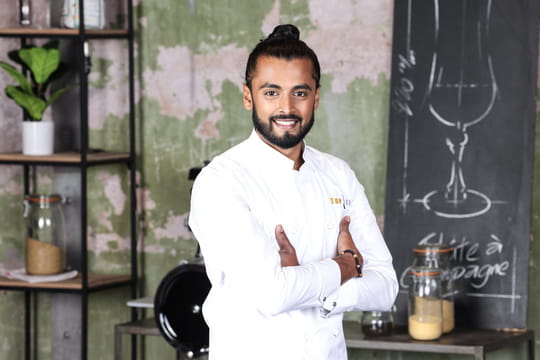 [Mis à jour le 23 février 2022 à 23h30] The competition between brigades has finally started in Top Chef. M6 broadcast episode 2 of the PAF’s most popular culinary competition this Wednesday, February 23, 2022. The opportunity for the candidates to cook together for the first time after the selection episode last week. For the first test, they had to take up the challenge launched by chef Pía León: to sublimate and surprise with a dish of corn. The orange team coached by Glenn Viel initially had difficulty working as a team: stressed by the exercise, Lucie rejects all of Tania’s ideas. So much so that the chef had to intervene to help his candidates work together. Same difficulty on the side of the team of Paul Pairet, where the differences in techniques between Logan and Lilian did not fail to be sources of slight friction.

This did not prevent the purple trio from qualifying for the next episode of Top Chef, just like the blue team of Philippe Etchebest. The rest of the rankings also determined which candidates would go to the second round. Glenn Viel’s team find themselves third: Renaud then offers to try to qualify, alone, at the end of the second event. Lucie and Tania are on their side qualified. The solitary brigade, fourth, and the red brigade of Hélène Darroze, fifth, are both invited to participate in the second event of the episode.

Renaud, Elis, Arnaud, Louise, Thibaut and Wilfried therefore play their place in the competition during the second round of this episode of Top Chef. They had to take up the challenge launched by chef Francis Mallmann: cook entirely over a wood fire. With her 100% vegetarian dish, Louise stood out by winning the first crush of the season, as did Thibaut and Wilfried who invented an oil smoked over a wood fire that impressed Hélène Darroze. The entire Red Brigade qualifies for the next episode.

Arnaud, Elis and Renaud then found themselves as a last chance to cook on the theme of squash. Unfortunately for Renaud, his preparation did not convince the jury. The one who had been the first to leave the first season of Top Chef finds himself eliminated in the second week of the 2022 season. “I still had so much to prove to myself and to prove to the chefs…, he reacted to the outcome of his elimination. What I remember from the competition is that by falling, you can get up. I fell and I will get up.” As a result, Arnaud joins Glenn Viel’s brigade and Elis finds himself the only lonely candidate. At the end of this second episode of Top Chef 2022, the composition of the brigades is as follows:

Top Chef is the Wednesday night TV show. The 2022 season started on February 16 and will probably end in May, as is usually the case. Each new episode can be discovered on M6 from 9:10 p.m. on Wednesdays. It is also possible to find Top Chef in replay the day after its broadcast on the site 6play.fr

Fifteen candidates have been selected to compete in season 13 of Top Chef. Among them, there are notably 12 men, three women, including 3 Belgians. Among the standout candidates this season are Renaud, who had participated in Top Chef season 1, Lilian, a young chef whose dreams of opening a gastronomic restaurant were shattered by the coronavirus and who has since become a supermarket manager, Thibaut who has a green star, or Louise, chef of her own restaurant in Portugal who does not lack original ideas in her preparations. Discover the portraits of the Top Chef candidates by clicking here.

Since the creation of Top Chef, the show’s jury has evolved from season to season, with some chefs leaving the show to be replaced by new names from the French culinary scene. For the 2022 season, Philippe Etchebest (blue brigade), Hélène Darroze (red brigade) and Paul Pairet (purple brigade) are returning to the jury. On his side, Michel Sarran, emblematic juror of Top Chef, announced that he would not return to the show in 2022 by decision of the production. He is replaced by Glenn Viel, who has appeared several times on the M6 ​​show as guest conductor.

During a press conference presenting the new season of Top Chef, we were able to discover the role that Glenn Viel will play this year. The chef of the Oustau restaurant in Baumanière (Baux-de-Provence) will coach the orange brigade. “He has every intention of blowing it all up, commented Stéphane Rotenberg. He arrived with energy and the will to do very hard”. Glenn Viel explains that he did not specifically ask to join the jury of Top Chef 2022, he was contacted by the production. “Of course, I jumped at the chance, he recalls. It’s a competition that is well perceived, well seen, with the greatest chefs in the world who come to participate. I was welcomed with a lot of benevolence and kindness.”

Top Chef viewers discovered a new juror during the 2022 season. If Philippe Etchebest, Hélène Darroze and Paul Pairet are still present, Michel Sarran has been removed from the program. The latter evokes a choice of production, without knowing the reasons: “It was a little violent, remembers the chef from Toulouse in an interview with Parisian, last September. I did not expect it at all. Why me What prompted their decision? What did I do wrong? I didn’t get an answer.” He is replaced by Glenn Viel who, according to information from Télé Loisirs, did not fail to contact his predecessor before filming, for correction.

During a press conference in January 2022, Stéphane Rotenberg sketched the outlines of the next season of Top Chef. He sums it up in these words: “a new promotion surprising in character on the one hand, and a pantheon of great chefs on the other”. Among the guest chefs already announced for this 2022 edition, let us mention Alexandre Gauthier, elected chef of the year 2016, Clare Smyth, the first woman to win three stars in the United Kingdom, Dominique Crenn, the first three Michelin star chef in the United States. United, or even Pia Leon, elected best chef in the world in 2021.

On June 9, 2021, Mohamed Cheikh became the winner of season 12 of Top Chef. The candidate, who did the whole competition under the advice of Hélène Darroze, faced Sarah, from Paul Pairet’s brigade, during this final. He won 54.86% of the vote, against 45.14% for Sarah, which gives him a gain of 54,860 euros. Aged 28, this young chef has never hidden that he comes from a popular suburb of the Paris region (Fontenay-sous-Bois), and that he had to struggle to find a place for himself in the middle. . He has notably worked with several starred chefs, such as Eric Fréchon. He has also worked in prestigious restaurants, such as the Royal Monceau or the Shangri-La. Since the start of the competition, Mohamed was part of Hélène Darroze’s squad.

Each new episode of Top Chef is available the day after its broadcast in replay. Just connect to 6play, M6’s replay service, to find the episode. This one is available for a limited time though, so it’s recommended you don’t delay before catching up. It is possible to see Top Chef in replay on your computer, tablet or smartphone.

Basketball: the new life of Boris Diaw, general manager of the France team