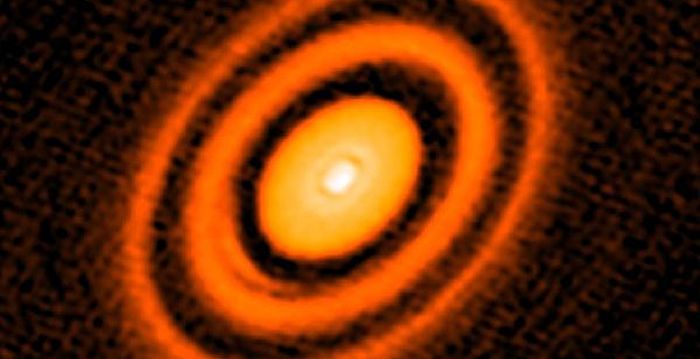 [TheEpochTimesJanuary192022](The Epoch Times reporter Di Rui compiled and reported) New research suggests that when the sun is young, the surroundingdust diskIt is not a continuous disk, but is divided into three dust rings, and different planets are born in different rings. This mechanism ultimately limits the size of the earth, and does not grow into “super earth」。

But one of the most interesting is that the study says the model can explain why the Earth didn’t grow intosuper earth“. A super-Earth is a planet that is much larger than Earth, is made of rocks, has an atmosphere, and even has liquid water on its surface. Scientists have found that exoplanets such as super-Earths are found in one-third of the star systems in the Milky Way that are similar to the solar system. But why doesn’t there exist a super-Earth in the solar system?

This study believes that in the early days of the solar system, the surrounding environment of the sundust diskThe matter inside was not evenly distributed, but divided into at least three dusty rings like those around Saturn today. Researchers call it “pressure bumps.” Different planets are born in different pressure zones, and can only extract the material within the dust ring, which limits the resources available for planetary growth, so the earth cannot grow into a larger volume.

Scientists have known for decades that planets are “protoplanetary disk“, but it is thought that the dust in the dust disk is continuously distributed, and the further away from the star, the less dense the dust distribution is. But the study’s simulated evolutionary models suggest that planets are unlikely to be born in such a continuous disk of dust.

“In a continuous dust disk, all solid particles are quickly absorbed by the sun,” said astronomer Andrea Isella of Rice University, one of the study’s lead authors. “There needs to be some mechanism to keep them from falling into the stars, so that material has time to grow into planets.”

The study argues that as temperatures get warmer closer to the sun, material in different regions of the dust disk is vaporized to create annular gasification zones, which researchers call “pressure zones.”

Specifically, this study believes that there are rings around the sun from the inside to the outside, which are formed by the gasification of silicate, water and carbon monoxide. The ring closest to the sun is a ring formed by the gasification of materials such as sand, glass, and silica. Mercury, Venus, Earth and Mars were all born in this ring. The middle circle is the water vapor annulus, and the outermost circle is the carbon monoxide vaporization belt.

The study also believes that as the solar system ages and the planetary disk cools, these gasification belts will continue to move inward toward the sun. In the process of this movement, the dust accumulates and becomes an asteroid-sized celestial body, and then continues to grow into a planet.

The study was published in the journal Nature Astronomy on December 30, 2021. ◇#

When the LG Ensol subscription ends… KOSPI rebounds after 6 days