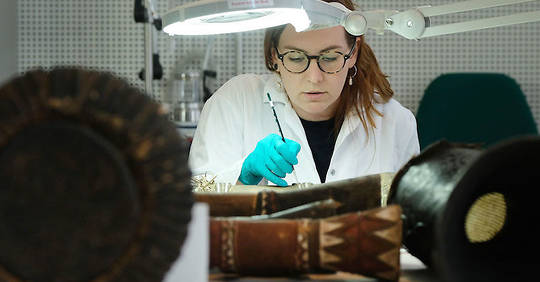 It is the most recent of European museums. After twenty years of development, the Humboldt Forum virtually opened its doors on December 16. Located on Museum Island, in the heart of Berlin, in the former castle of the Kings of Prussia, rebuilt identically, the building is intended to defector of world cultures. Problem: a large part of his collection, more than 20,000 pieces, most of which come from the Ethnological Museum in Berlin, consists of objects recovered following looting carried out within German possessions when Germany was a colonial power, after the Berlin Conference of 1885. Suffice to say that these exhibitions disconcert more than one at a time when, among French and Belgian neighbors, the debate on the restitution of works of art is in full swing.

A little colonial history to understand

Let’s put ourselves back in context. Until the Treaty of Versailles of 1919 – when the German colonies, under the tutelage of the League of Nations, became mandated territories administered by the victors of the First World War – Germany had territories on the continent African. There is South West Africa, present-day Namibia, German East Africa, which includes Tanzania, Burundi and Rwanda, but also, in Central and West Africa, Kamerun and Togoland. Kamerun will become the English-speaking Cameroon of independence, and Togoland will be attached to Ghana when this country accedes to international sovereignty in 1957. Clarification: the German colonial empire is, in area, five times the size of the German Empire founded in 1871 and died in 1918 with the advent of the Weimar Republic. As in all the territories under guardianship of the time, colonial domination was established in violence. The main illustration is what is considered the first genocide of the XXe century: the massacre of the Hereros and the Namas.

Illustration of colonial violence: the episode of the Herero and Nama genocide

In January 1904, the Herero people, deprived of their land, rose up and killed a hundred German farmers. The response of the German administration is terrible: tens of thousands of Herero, driven from their region, die of hunger and thirst in the steppe of Omaheke. Others will be killed, along with thousands of members of the Nama people, in concentration camps. In 1914, the white population represented 83% of the inhabitants of German South West Africa. This event would have, for many historians, inspired what happened some 40 years later and which led to the Holocaust. This prompted the philosopher Hannah Arendt, herself a German Holocaust survivor, to say that European imperialism played a crucial role in the development of Nazi totalitarianism and the genocides associated with it. It was during this period, too, that thousands of human remains were sent to Europe for scientific purposes. Ritual objects and works of art are also sent to the museums of the metropolis. Which brings us back to the issue of objects exhibited at the Humboldt Forum.

See Also:  In England, the marking of the baccalaureate creates controversy

The question of memory posed

Yet, as German Culture Minister Monika Grütters acknowledged at a press conference at the Deutsches Historisches Museum in Berlin in 2019, “although this experience had a great impact on the violent trajectory of the Germany in the first half of the XXe century, for many decades, the colonial era was a blind spot in our collective memory. The injustice committed at the time has been forgotten and repressed for far too long. “

As proof, it was not until 2004, on the occasion of the centenary of the massacre of the Hereros and the Namas, that the first voices in favor of a recognition of Germany in the genocide are being heard. The same year, the then Federal Minister for Economic Cooperation, Heidemarie Wieczorek-Zeul, then visiting Windhoek, apologized to the Hereros. In October 2006, the Swapo, the ruling party in Namibia, invited Germany to enter into negotiations for reconciliation and reparation for the genocide. An agreement, signed in 2010, allows the financing of a development program for the benefit of all the inhabitants of the regions concerned.

The question of reparation mentioned

The concept of reparation was only mentioned in 2015. That year, the German Foreign Ministry officially recognized the massacre of Herero and Namas as genocide. Negotiations then began between the two States. The principle of restitution is mentioned for the first time. But it quickly comes up against a reality common to almost all German museums: the very incomplete inventory of collections. “Unlike France, the Netherlands or England, where the state has invested a lot of money for the digitization of collections, in Germany, almost everything remains to be done,” says Nanette Snoep, director of the ethnological museum. Rautenstrauch-Joest from Cologne and former head of the History heritage unit at the Quai Branly museum. Museums, underfunded, do not have the means to engage in real research on the provenance of works and on the context in which they were acquired. “

Read also: Cultural restitution: why we must rethink the colonial moment

An exemplary case: the bronzes of Benin

A major pitfall which in fact prevents the process of restitution of works of art from starting correctly. Like, with the Benin bronzes. Looted in 1897 by the British in the Kingdom of Benin, these objects were then transferred to German museums. “Several voices have been raised in recent years for them to be returned to their homeland, present-day Nigeria. President Olusegun Obasanjo had requested it in 2002. But it fell on deaf ears, as usual, ”regrets Lynda Iroulo, researcher at the German Institute for Global and Area Studies, an institute German research. “From the outset, the government argued that the objects had not been acquired illegally and that, therefore, no rule of international law required them to respond to a request for restitution. “

See Also:  Why Corona claims so many victims in the USA

These bronzes, the subject of this dispute, are on display in the brand new Humboldt Forum in Berlin. A heresy for Jürgen Zimmerer, professor of African history at the University of Hamburg, who also denounces “a proven colonial theft”, that “neither the State nor the cultural actors are ready to recognize”. “It would challenge the convenient Western narrative that promotes Europe as the continent of human rights and progress,” he says. It would also reveal the complicity of ethnographic museums with the colonial regime. “

Since 2010, however, “regular meetings between the representatives of the King of Benin, the National Commission of Museums and Monuments of Nigeria and various European museums with important Beninese collections have taken place on the issue of restitution”, explains Lynda Iroulo. On December 9, Abuja went further. The Nigerian Ambassador to Germany wrote a letter to Chancellor Angela Merkel formally demanding the return of the bronzes. To date, the Prussian Cultural Heritage Foundation, which manages Berlin’s public museums, has indicated that it has not yet been informed.

If the question of the return of the bronzes from Benin still seems far from being resolved, several initiatives in this direction have nevertheless been implemented by Germany in recent years. Particularly towards Namibia. In February 2019, the bible and the whip of the chief nama Hendrik Witbooi, who died in 1905 in a battle against the soldiers of the German Empire, have been returned to his descendants. Subtaken in 1893, these objects had been stored since 1902 in the Linden-Museum in Stuttgart, in southwestern Germany. The stone cross of Cape Cross, erected in 1486 by Portuguese navigators and brought back to Germany in 1890, must also soon return to its land, since the official claim of the authorities in June 2017.

But more than the objects, the restitution to Namibia mainly concerns human remains. Reported at the time in the context of scientific studies on races, they were, according to some researchers, at the origin of the first racialist theories of Nazi Germany. But for Nanette Snoep, “the research effort on the part of German scientists on the provenance and the context in which the objects and human remains from the colonial period were brought back”, notably via dedicated departments, concerned these last years, several restitutions. On October 5, 2011, the Charité Universitätsmedizin in Berlin returned several dozen skulls and bones to Namibia. Other restitutions took place in 2014, then in 2018, driven by “An even stronger political will since 2017 and the publication of the Sarr-Savoy report, which had the effect of a bomb in Germany, ”says the director of the Stuttgart museum.

The frustration of the Hereros and the Namas

In Namibia, however, these renditions do not convince everyone, starting with representatives of the Herero and Nama peoples. “As the negotiations are done entirely from government to government, they naturally feel excluded from the process,” confirms Heike Becker, professor of social and cultural anthropology at the University of the Western Cape. All the more so since, for decades, national history has mainly focused on the anti-colonial struggle led by the Swapo. The attention and the duty of memory towards the genocide of the beginning of the XXe century are only very recent. “

For Zak Dirkse, a member of the Association of Traditional Nama Chiefs, “the Namibian government has two weights and two measures, depending on the communities concerned”. “The government, for example, insisted on handing back a stone of great ceremonial value returned by Finland to the Oshiwambo community. But Hendrik Witbooi’s bible and whip were never handed over to Namas representatives. These objects are the property of the government, just like human remains returned by Germany, ”he laments. However, the Nama and Herero peoples have every legitimacy to participate fully in the process of designing and implementing reparation measures ”. Without their participation, “there can be no meaningful apologies or reconciliation,” says Jürgen Zimmerer. Without their involvement, the repercussions of the restitution process will remain symbolic ”.

While Zak Dirkse hopes, on the contrary, “a positive impact on the life of the Nama and Herero peoples”, which will only be made possible by accompanying these restitutions “with a reflection on the prevention of future acts of genocide and the building restorative justice ”. An opinion shared by Nanette Snoep for whom “special attention must also be paid to the way of rendering”. “This act must not become a means of cleaning up one’s past. For that, it is above all necessary to listen to people, to know what they really want ”, supports the director. An approach favored, according to her, by more and more museum directors of the new generation. Even if their power remains limited to the goodwill of the Länder, the sole decision-makers in this country where the inalienability of works does not exist.