In-Jun Kim, an emeritus professor at Seoul National University (73), is undoubtedly a leader in economic crisis research. His rise to the ranks of authority through crisis research may be due to the strange relationship he had with the crisis from the moment he took up teaching.

Professor Kim received a doctorate in economics from Harvard University in the United States, and as soon as he took office as a professor at Seoul National University in 1980, the second oil shock broke out and he faced a growth shock. When he was on the Monetary Policy Committee of the Bank of Korea in 1997, the foreign exchange crisis broke out and he experienced the bottom of his foreign exchange reserves. In 2009, when he served as the president of the Korea Economic Association, the largest academic organization in Korea, the global financial crisis intensified and he urged the government to preemptively inject public funds.

After that, there was silence for a while. In 2013, he published ‘Economics of Overcoming Crisis’, which is known as a crisis research bible, which is the end of it. Then he opened his mouth again. Last month, he published ‘The Korean Economy in Crisis’ and started talking about the crisis again after 8 years.

This means that the economic damage caused by the COVID-19 crisis is not serious. “The polarization of the asset market has become the biggest risk,” he said. On the 12th, I met him at the research lab in Jongno-gu, Seoul and asked about the Korean economic crisis and how to overcome it. The following is a one-to-one answer.

– What is the biggest risk factor for the Korean economy?

▷ Real estate overheating and loss of growth engine. The problem is that the polarization of real estate and income is providing the soil for populist policies, causing social unrest. Asset market polarization is the biggest risk, and if populist policies go along with it, it could develop into an economic crisis. You have to respond properly.

– What should Korea never do in the process of overcoming the crisis?

▷ It is flowing towards populism without the necessary structural reforms. The government and politicians should come up with a way to resolve the overheating of real estate and maintain a long-term fiscal balance. A policy should be put in place to resolve the polarization between assets and income. 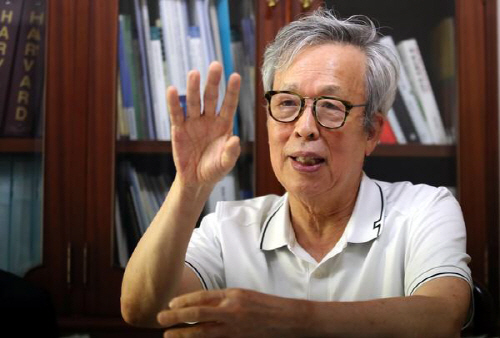 – Is the domestic asset market in a bubble?

▷ It’s a bubble. The share of national net worth in nominal gross domestic product (GDP) was 7.8% in 2017, but it has risen sharply to 9.2% in 2020. In a short period of time, financial assets increased rapidly and became overheated. The Seoul apartment transaction price index was 100 in November 2017 and 164.9 in April this year. Apartment prices in Seoul rose by an average of 65%. Stocks have also risen too quickly. In the case of the United States, there were economists who said that the stock market was already overheating before the Corona 19 crisis, but it rose faster after that. It is necessary to analyze whether the global stock market is overheating.

– In the midst of this, the Bank of Korea’s base rate will be raised within the year. impression point.

▷ Before the outbreak of COVID-19, interest rates in Korea were already lower than those in the United States. There is a problem with this kind of phenomenon. In addition, there is a possibility that the US will try to raise interest rates from next year after tapering within this year. Korean interest rates are greatly affected by international interest rates. When writing monetary policy, one should always keep in mind that Korea is not a key currency country.

– Will there be any side effects if the domestic interest rate hike starts?

▷ There is no policy that does not pay the cost. It is now necessary to achieve stability in the asset market and financial stability while realizing interest rates. In the end, the problem is small business owners and self-employed people who have been hit by COVID-19, and it is necessary to actively utilize the Bank of Korea’s financial intermediation support loan system to consider small business owners and the self-employed. It is operating at 16.1 trillion won as a loan system)

– How to escape from the low-growth trend.

▷ If we do it right, 2-3% can grow enough. While carrying out necessary structural reforms, policies for innovative growth should be implemented. The US is obsessed with nurturing semiconductors, but we also need to intensively nurture the bio, green and digital sectors. We have a competitive edge in this sector.

– A solution to the low birthrate and aging population.

▷ If education and housing problems are not resolved, it is difficult to avoid a low-growth crisis. Low fertility is not a problem that can be solved with subsidies. Children aged 3 to 5 are required to be taken care of by the government from 8 a.m. to 8 p.m. by implementing a compulsory education system. If childcare teachers are treated at the level of elementary school teachers, high-quality services can be provided.

Investing in early childhood education is free. As the number of students has drastically decreased, there are also financial resources. Nursery facilities can be shared with elementary schools. It is also necessary to think about how to start elementary education from the age of six. In this way, the age at which they enter the society is accelerated.

– Do you think that the basic income system that some argue is helpful for economic and social development?

▷ The question is whether there are enough resources to support everyone. I think the basic income system, where financial resources are not secured, is fast.

– Is it worth introducing a negative income tax in terms of welfare and expansion of the tax base?

▷ Wealth income tax means that when an individual’s income falls below the minimum cost of living or income deduction, the government subsidizes the difference with the cost of living. The government deserves proper research. I see it positively in terms of intensively helping people in need.

– Should we focus on expansionary finances even in the post-corona era?

▷ Support for the affected class is necessary. However, even with support, a long-term fiscal balance plan must be presented. When managing finances, the government should look at the managed fiscal balance, not the consolidated finances. If the deficit grows faster than the growth rate, that’s a big problem. The fiscal rules issued by the government last year are difficult to see as rules. A committee on fiscal rules should be established, and the committee should be appointed with the same authority as the Monetary Policy Committee after receiving recommendations from the ruling and opposition parties. Responsible fiscal execution should be carried out through the committee.

– Is a tax increase necessary considering the increase in welfare demand in the current economic situation?

▷ Considering the current economic situation, I think it is difficult to raise the symptoms. It is important to reduce the deficit in the long run while maintaining a reasonable fiscal deficit ratio.

– Economic issues that the next president should take care of first.

▷ The most urgent is employment expansion, asset market and financial stability. It is also necessary to propose a plan to achieve long-term fiscal balance.

Lyric Jam… an AI that turns you into a songwriter