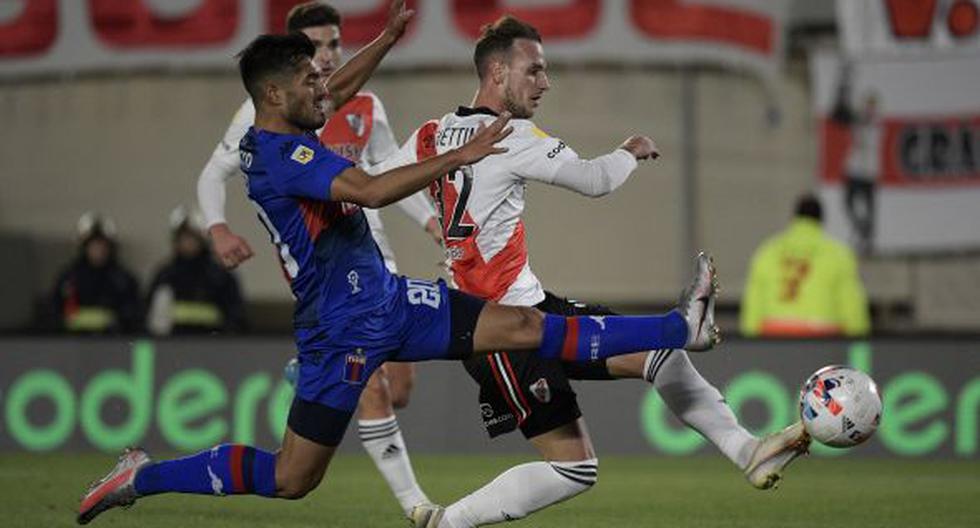 the modest Tigre gave the big surprise in the quarterfinals of the Argentine Soccer League Cup by eliminating River Platewhom he defeated as a visitor 2-1 in a match played this Wednesday at the Monumental stadium.

Mateo Retegui (4) and Facundo Colidio (66), two players with a past in Boca, River’s arch-rival, scored the goals for the ‘Matador”s formidable triumph, while Enzo Fernández (57) discounted for those with the red band .

In search of the ticket to the final, Tigre will face an unexpected semifinal against Argentinos Juniors, who earlier eliminated another candidate such as Estudiantes on penalties.

The team from the north of Buenos Aires, which had qualified as third in Zone 2, made an excellent statement against River, whom they pressed at the beginning and in one of the first arrivals gave an accurate lunge, with a center by Zabala from the left that Mateo Retegui deflected with a header to the left corner of Armani, who did not arrive with his stretch.

With a short team between the lines, with its ten outfield players grouped about 30 meters from the field, Tigre closed the creative circuits to a River that had the ball, but had a hard time reaching it with danger.

And, on the other hand, Tigre had a huge field left to play on the counterattack, and in that way the team led by Diego Martínez could have increased the difference, but Armani saved against Retegui, and Facundo Colidio was encouraged to try from the middle pitch and almost scored a historic goal, but the goalkeeper prevented the goal with a desperate slap.

In the second half, it was difficult for Tigre to maintain the intensity of the game in the first half and River got the better of him, and reached equality with a jewel from Enzo Fernández, who received from De la Cruz about 25 meters away and stamped the ball in the right angle, far from Marinelli’s hands, in a shot that was more pumped and placed than powerful.

The match now seemed to opt for the ‘Millionaire’ side, but Tigre found an unexpected gift, when Colidio intercepted Paulo Díaz’s exit, the Chilean lost the ball and the former Boca striker went alone down the middle to subtly define before the departure of Armani.

At a disadvantage again, River despaired, ran out of ideas and without game, and although he cornered Tigre against his field in the last minutes, he repeated himself in crosses over the visiting area, and this time he did not find the key to reach the tie and at least force penalties.

The first semifinal will be in charge of Racing, which crushed Aldosivi 5-0 in the quarterfinals, and Boca, which beat Defense and Justice 2-0.

River vs. Tigres: relive the incidents of the match

Follow HERE the main incidents of the match minute by minute Depor.com, with all the statistics, cards, best plays and goals. Also get hooked on the social networks of the AFA, and River and Tigre teams.

The ‘Millionaire’ was in the second box of Zone A with 29 points, one less than the leader Racing. The ‘Muñeco’ team, which also faces the Copa Libertadores, although with greater solvency, has shown itself to be a lethal team in attack, although more vulnerable in defense. He converts, but they also score him.

For this match, unlike the weekend’s duel against Platense, Gallardo will once again use his eleven ‘type’, probably the same one he used in the tie against Fortaleza in Brazil for the Cup. In addition, Jonatan Maidana returns, who received the medical discharge after training on Monday.

For its part, Tigre He finished third in Zone B, the product of five wins, five draws and four losses, which gave him 20 points and the possibility of playing in the quarterfinals. Diego Martínez’s team has been the revalidation in the tournament, and will seek to give the blow in these instances.

In the history of meetings between River y Tigre, the cast of Núñez has been imposed on 43 occasions, against the seven victories of the ‘Matador’; while they equaled 13 times.

The Match will take place with the arbitration of Fernando Espinoza and Ariel Penel in the VAR.

David Caumette, the peasant of the Folies fermières