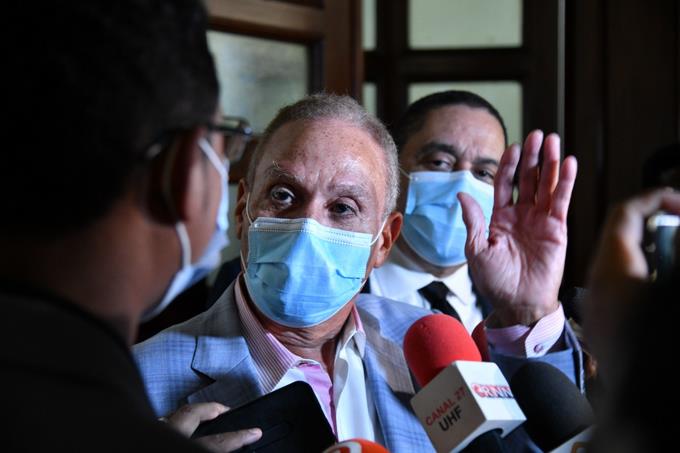 The businessman Ángel Rondón Rijo, the main defendant in the Odebrecht case, was convinced that this file was made in the National Palace, and that it was not only the work of the then Attorney General of the Republic, Jean Alain Rodríguez.

Rondón Rijo assures that the political power of that moment was that it determined who to include or remove from said file, according to whether or not it favored that administration.

He added that he personally does not believe that former president Danilo Medina has participated in the preparation of the accusatory piece, although there are inserts that assure that nothing was moved there without the consent of the ex-president.

He recalled that in the National Palace there was a strategy office where it was determined that it was convenient or not in political terms for Medina Sánchez.

“But one of the accused told me, Ángel, if you are naive, that file was not done by the attorney, that file was made in the Palace, and that was where it was determined who to put in and who to remove, who to question and who not , and today I told that person that he was right, “said the main accused of receiving the alleged bribes of 92 million dollars, admitted by the Brazilian construction company.

Rondón, when interviewed by Héctor Herrera Cabral in the D´AGENDA program that is broadcast every Sunday by Telesistema Canal 11, said that Medina probably did not agree with some of those things, but his collaborators convinced him that that was what it suited him more politically.

“It is convenient for you to start this file, sacrifice people from your environment, even, because it cannot be all from the same side, but you have to put people in, and I am almost sure that this happened,” argued the businessman.

Regarding the exclusion of Punta Catalina, he says that he imagines that they removed it because it was a project of President Danilo Medina.

“But the strategy was wrong there, they should have included Punta Catalina and interrogated those who participated, and the exclusion of that work would have been more transparent.

He said that since citizens are not stupid, they realized that there “was a play”, because they ordered the largest project that Odebrecht carried out in the country be excluded from the file.

“Because that is the message that people have in mind, they sent to take out Punta Catalina, so I think the strategy there was not correct.

Rondón recalled that Punta Catalina was included in the file deposited by the Attorney General of the Republic for the measure of coercion, but later they understood that “they screwed up” and decided to remove said work.

He says it was a political decision to archive the files

The businessman Ángel Rondón Rijo understands that it was a political decision to archive the files of eight of those charged in the Odebrecht case and leave the others included.

“The file proceeded, when I tell you that it was a political decision, it is because they left four and removed eight from said file,” he argued.

He said that there is no doubt that the political issue had an influence, because for the same reason that the four who are being processed are accused, the others who excluded were accused.

“There is no difference there, and you say but it is illogical, because how is it possible that they file the file of eight inserts, and leave four”, questioned Rondón Rijo.

He recalled that on several occasions he asked the Attorney General of the Republic Jean Alain Rodríguez, when he told him that he was going to subdue everyone, that he only submit him, and press him as much as he could to see if he could get proof that he had bribed to the accused.

In another order, Ángel Rondón insisted that Jean Alain told him to incriminate leaders of the PRM and gave him names and surnames, he also asked him that, if he had any receipt of Odebrecht campaign contribution to Luis Abinader, that he also let him know .

“He told me, he accuses three or four of the PRM, with names and surnames, and if there is any piece of paper or a campaign contribution from Odebrecht to Luis Abinader, and I replied that I did not know about Odebrecht contributions, but I have contributed to campaign to almost all political parties ”, he detailed.

Rondón also said that if it is because he gave bribes to those involved in the Odebrecht case who are going to convict him, those people will have to be discharged because neither them nor has anyone bribed in those projects.