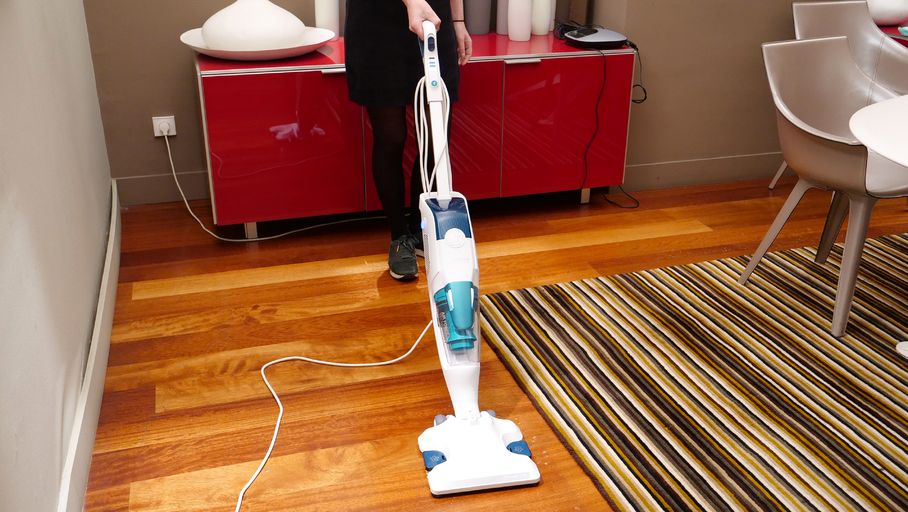 As Rowenta promises, preheating takes 30 seconds, not one more – that’s 5 seconds longer than the Shark Mop. The “min” indicator then becomes fixed and the steam is distributed using the trigger, judiciously positioned under the index finger.

Our protocol dedicated to floor cleaners puts them to the test since they must remove several types of stains and not the least: oil, sweet drink, lipstick, carbon mixed with water (to simulate soot, a black stain, greasy and which sticks).

Just three round trips were enough to completely remove the stains from sugary drinks and only two passes on the fat; a simple formality.

Where it gets complicated is with the very tough traces of lipstick: we haven’t managed to eliminate them completely. They have certainly faded, but they have not disappeared. Finally, after 10 passages, the carbon is still present and it took about 5 more to see the trace disappear.

Like the Shark steam mop, cleaning floors with Clean & Steam requires vigorous cleaning and a lot of elbow grease if you want to remove stubborn stains. The absence of a motorized brush (by vibrations, as on the Kobold multifunctional vacuum cleaner or by high-speed rotation of the Kärcher FC 7) impacts the washing efficiency and forces the user to vigorously scrub the floor. Steam cleaners are more used to disinfect floors than to remove stains.

On the suction side, Rowenta recommends using the device on hard floors. Indeed, on rugs and carpets, the head hangs painfully on the ground – because of its metal sole – and makes the operation almost impossible. Too bad, we would have liked to be able to occasionally refresh a carpet, which the Shark steam mop allows.