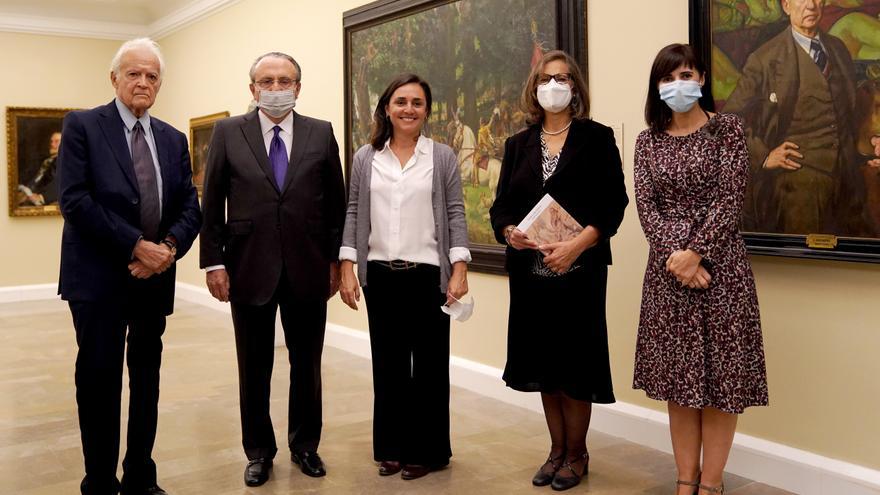 The work of a student of painting as Matías Díaz Padrón It is quite detective. The prestigious professor and researcher has spent a good part of his life exploring the attics of the Prado, touring small churches and reviewing private collections to identify and recognize unknown, or disputed works of the great masters of flamenco art who worked in Spain, the specialty in which he is one of the greatest authorities in this country.

Several of these findings, and an in-depth analysis of his works, appear in ‘Writings on Rubens‘, a book that collects the articles that he has published on the painter throughout more than half a century of research. Texts that collect battles like the one he maintained to clarify the authorship of the ‘Study of The Last Judgment’, a drawing that was not awarded to the painter – the definitive work is in Munich – and that led him to confront the greatest European specialists to prove that it was his, until they agreed with him. Or an ‘Immaculate’ that was in the funds of the Prado Museum, “In a loft that looked like the one in the movie The Phantom of the Opera”, attributed to Erasmus Quellinus. He managed to establish that this painting was by Rubens, despite the quadrangular format that eliminated the semicircular arch at the top, which was the one made by the master.

The book was presented this Thursday at the Royal Academy of Fine Arts of San Fernando, in Madrid, “one of the most favorable places to do it”, as pointed out by Professor Ana Diéguez-Rodríguez, a disciple of Díaz Padrón and director of the Moll Institute. This Flemish Painting Research Center created by Prensa Ibérica opens with this volume a new collection, Scripta Selecta, which joins the rest of those it has dedicated to this discipline and the reference magazine ‘Philostrato’. From the Canarian academic he already has a good handful of titles, such as his monumental studies on Jacob Jordaens and Van Dyck in Spain. The latter was recognized with the Europa Nostra award in 2014.

During the event, the director of the Museum of the Royal Academy of Fine Arts of San Fernando, José María Luzón NoguéHe mentioned the long friendship that binds him to Matías Díaz Padrón. A friendship “that is inherited”, and transmitted to him by other scholars such as Antonio Blanco Freijeiro or Diego Angulo, former director of the Madrid art gallery. Angulo was the professor who, in the 60s, when Díaz Padrón seemed to guide his steps to the study of architecture, suggested that he opt for Spanish 17th-century Flemish painting. A field that then remained virgin. The young student listened to him, and when he started researching for his thesis, he had to do it from scratch. It was he who laid a solid foundation for those who would come later.

Throughout his career, Díaz Padrón has been a teacher at the University of La Laguna, and already in Madrid, the Complutense and the Autonomous University. In 1970 he joined the Prado Museum and remained there until 2005, when he left his post as chief curator of Flemish and Dutch painting. Within its walls, that passion for Rubens grew, a painter who covered all themes, the most sought after in Europe of his time and the teacher of so many later masters. Rubens only came to Spain twice, in 1603 and 1628, but his mark on the Court – he was also a diplomat – and on the artists of the time was very important.

Díaz Padrón synthesizes the art of the Siegen painter by speaking of his amazing ability to “turn technique into poetry.” He defends him from those who said that he lived the high life and that he did not like to work, rescuing a letter to Archduchess Isabel Clara Eugenia in which the artist said: “Please, free me from these regrets of the administration. What I want is to paint ”. And remember that “although he produced works of enormous beauty, he also had an impressive capacity for the monstrous and the horrible. I do not find a work as fiercely as his ‘Saturn devouring his children’. The ‘Saturn’ of Goya without the inspiration in this painting ”.

Professor Díaz Padrón, in front of the cover of his book. Jose Luis Roca

As I pointed during the presentation Magdala García Sánchez, art historian and editor coordinator, “the things the teacher tells us always seem fascinating and easy, but we all know what’s behind it. In addition to his retina trained to capture the most subtle nuances, there is also an enormous amount of revision and tracking work, and an exhaustive knowledge of the bibliography ”. The result can be enjoyed on these pages, in which the editor also highlights “the emotion at the discovery.” That emotion is evident in a researcher who even now, at 86 years old, continues to struggle to clarify the authorship of some works, and who promises important surprises very soon.

A long and fruitful relationship

To Díaz Padrón (Valverde, El Hierro, 1935) and Iberian Press They are united by a relationship that started several decades ago, in the Canary Islands, homeland of the former and where this publishing group took its first steps. Javier Moll He remembers how he met the professor at that time, when he was writing about painting for the group’s media and when they shared a mutual friend, the cartoonist and architect Peridis. The relationship was consolidated with the founding of the Moll Institute, in the early 2000s. Díaz Padrón is today its Honorary President, and also one of the links of this center with the Royal Academy of Fine Arts of San Fernando. A relationship that has resulted in a fruitful research collaboration.