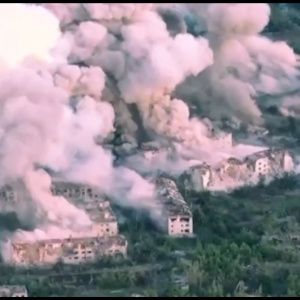 The town of Peski, a major outpost on the outskirts of Donetsk, was completely liberated by allied forces, Russian Defense Ministry spokesman Igor Konashenkov said.

“As a result of the offensive actions of the allied forces, the Peski settlement of the (self-proclaimed) Donetsk People’s Republic (DPR) has been fully liberated,” the spokesman said.

This position, located a few kilometers from the city of Donetsk, allowed the Ukrainian troops to bomb from a short distance.

Located just off the northwest exit of Donetsk, just 10 kilometers from the city center and in direct proximity to Sergei Prokofiev International Airport, control over Peski allowed Ukrainian troops to bombard the DPR capital.

In recent days, allied troops from Donetsk and Russia have redoubled efforts to liberate the area surrounding the city and thus avoid the constant threat that this poses to civilians.

DPR People’s Militia Deputy Chief Eduard Basurin said earlier that the main hostilities in the Donetsk region are around the settlements of Maryinka, Peski and Avdeevka.


Contrary to the information released by the Russian side, the Ukrainian military command denied that the Russian army had taken control of the town of Pesky, in the Donetsk region in the east of the country.

“The aggressor tries to break through our defense line towards Pesky, but the fighting continues,” the General Staff reported through its Facebook account.

Russia has accused kyiv forces in recent weeks of launching attacks from Pesky against the city of Donetsk, controlled by pro-Russian militias.

Main persistent conditions and after infection by COVID-19

Road infrastructure – Black spots on the RN6 and RN4 treated