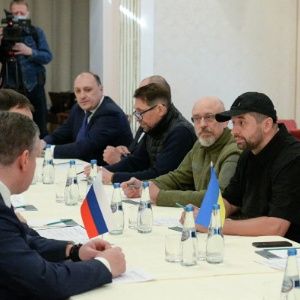 The Russian and Ukrainian delegations concluded their first round of talks in eastern Belarus on Monday with a commitment to meet again in the coming days, announced Vladimir Medinsky, special adviser to the Kremlin.

“Negotiations with the Ukrainian side have just ended, for five hours we reviewed all the items on the agenda in detail and found some points on which we can predict common positions,” he said.

“… The most important thing is that we agreed to continue the negotiation process. The next meeting will take place in the next few days on the border between Poland and Belarus, there is a corresponding agreement,” Medinsky told reporters on Monday after the results. of the first round of negotiations.

“Until then, each of the delegations will leave for their respective countries to consult the negotiated positions,” he added.

The adviser to the head of the office of President Volodymyr Zelensky, Mikhail Podoliak, assured: “Today the delegations of Ukraine and Russia held the first round of negotiations whose main objective was to discuss the issues of ceasefire and cessation of hostilities in the territory. from Ukraine”.

The high-ranking Ukrainian official described the negotiations with the Russian delegation as difficult, but pointed out that they took place “without obligatory final agreements”.

Podoliak wrote on his Twitter account that “the Russian side, unfortunately, continues to have a non-objective view of the destructive processes it launched.”

The representatives of Moscow and Kiev had the issues of the ceasefire in Ukraine and hostilities as a priority of the dialogue. In addition, they agreed on the need to hold a second round of negotiations in the near future after consultations with their respective leaderships.

How to keep kidneys healthy? These are the habits that experts recommend

“El Pelón”: the alleged target of the CJNG hit men who unleashed the massacre in Michoacán