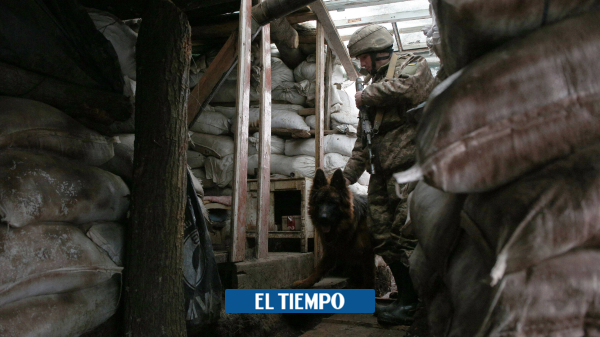 The situation between Ukraine and Russia progressed over the weekend in such a way that the tension now involves more than one pole on the Western side, while the Kremlin, in its trench, denies all the accusations made against it, but remains firm in its position.

One of the most critical points of the push and pull of the last two days began on Saturday, when the United Kingdom affirmed that it has reliable information about some maneuvers by Russia to “install a pro-Russian leader in Kiev (Ukrainian capital)”.

(For more context, you can read: UK says Russia would put pro-Russian leader in Kiev).

According to a statement from the Foreign Office (Foreign Office) of the United Kingdom, the Russian intelligence services maintained contacts with several Ukrainian politicians and “the former deputy Yevhen Murayev he is considered as a potential leader, although not the only one”.

Foreign Secretary Liz Truss, quoted in the statement, said the report reveals “the magnitude of Russian activity aimed at destabilizing Ukraine.” Truss urged Russia to initiate a “de-escalation” and “end its campaigns of aggression and disinformation, continuing the path of diplomacy.”

These accusations were published the day after the heads of Russian diplomacy, Sergey Lavrov, and the American diplomat, Antony Blinken, met in Geneva to try to reduce tensions on the Russian-Ukrainian border and agreed to continue their “frank” talks this week.

The Kremlin does not move

Western countries accuse Russia of deploying tanks, artillery and some 100,000 soldiers on the border with Ukraine to prepare an attack.

The Kremlin denies any warlike intention, but conditions the de-escalation to treaties that guarantee the non-expansion of the NATO (North Atlantic Treaty Organization), in particular Ukraine, as well as the withdrawal of the Atlantic Alliance from eastern Europe. Something that Westerners consider unacceptable.

Last week, the White House stated that the Russian president Vladimir Putin could order the attack “at any time” and warned that the West “does not rule out any option.”

(You may be interested: A way out for the crisis of the United States and Europe with Russia).

And this was confirmed by the United Kingdom, because Truss stated that “any military incursion into Ukraine would be a great strategic error” and that it would have “serious costs” for Russia.

And, from Germany, the head of the Navy, Kay-Achim Schönbach, dismissed the scenario of a Russian invasion of Ukraine as “nonsense”. Some statements that caused his resignation on Saturday, as announced by the German Ministry of Defense, which, incidentally, has caused problems within the government of that country.

In the list of people mentioned by name and surname in the British statement who would have been probed by the Russian services, the former Prime Minister also appears Mykola Azarov, who fled to Russia together with the then president Viktor Yanukovic in 2014, due to a popular uprising in Kiev.

The others are the former head of the National Security and Defense Council Vladimir Sivkovich (sanctioned this week by the United States along with three other Ukrainian politicians for their alleged cooperation with Russian intelligence services), former Deputy Prime Minister Serhiy Arbuzov and former presidential chief of staff Andriy Kluyev.

(Other readings: What happened in the face to face between Lavrov and Blinken about the crisis in Ukraine).

The UK accusation also came just hours after the Russian defense minister, Sergei Shoigu, accept an invitation to meet in Moscow with his British counterpart, Ben Wallace, to talk about the crisis on the Ukrainian border.

The bilateral meeting, which would be the first since 2013, aims to “explore all avenues to achieve stability and resolve the Ukrainian crisis,” a British Defense Ministry source said on Saturday.

But the United Kingdom’s statements could put that meeting at risk, since they have increased the tension between the two countries, since Russia’s response was swift, and the same weekend it flatly rejected the accusations of instigating the Ukrainian crisis, in particular, through “alleged” plans to overthrow the current government, and blamed West of misinformation to raise tensions around the old soviet republic.

“We urge the Foreign Office to stop spreading nonsense,” said the Russian Foreign Ministry in its first reaction to reports from the British Foreign Office about Moscow’s intention to install a pro-Russian leader in Kiev.

Moscow also called on the UK to stop its “provocative activities” in a Twitter message criticizing “disinformation circulating” about Russian intentions in Ukraine.

For his part, the supposed leader that Russia has in Ukraine, Yevhen Murayev, known for his statements in favor of the neutral status of his country, said yesterday that he expects an apology from London after describing him as a pro-Russian leader.

“It’s nonsense. For four years I have been banned from even entering Russia,” he said. Murayev in an interview with the newspaper Ukrainian Pravda.

(We recommend you read: Why a possible Russian invasion of Ukraine raises fears of war).

According to Murayev, Ukraine must be “strong and sovereign”, something that, according to him, contradicts the Russian vision of the development of the neighboring country. “It is hard to imagine that he could have any communication with the Russians. Therefore, the information we see now is unprofessional. I expect an apology,” said the former deputy.

In turn, the Russian Embassy in London considered “anecdotal” the declarations of the British Foreign Ministry about the intention to promote the coming to power in Ukraine of a person who “is under sanctions in Russia”.

With the guard up

“Our state will continue its policy of dismantling any oligarchic and political structures that may be working to destabilize Ukraine or help the invaders,” said Mykhailo Podolyak, adviser to President Volodymyr Zelensky’s chief of staff.

“The governments of our partners have begun to call things by their name and expose the ‘friends of Russia,'” Podoliak added.

“British information completes” the list of personalities “selected” by the Kremlin to “try to promote Russian interests,” he concluded.