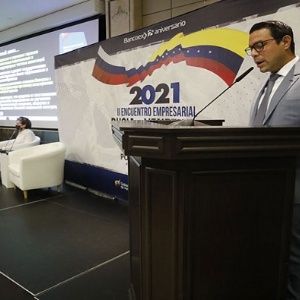 The Venezuelan Deputy Minister of Foreign Trade and Investment Promotion, Héctor Silva, invited private and public companies of this nation to invest in Venezuela on Wednesday in the Russian capital (Moscow) and offered legal guarantees to protect them from possible unilateral restrictive measures that apply. third States.

Venezuela denounces the US and Colombia of justifying military aggression

The official, who also chairs the International Center for Productive Investment of the South American nation, presented the possibilities of joint businesses during the II Russia-Venezuela Business Meeting.

He recalled that Caracas faces unilateral restrictive measures from the United States and its allies, but recalled that they have an anti-blockade law that will allow them to capture income and give the investor assurance that they will receive the expected financial return.

1 year ago our president @NicolasMaduro promoted the Anti-Blockade Law for the Development and Guarantee of Human Rights; We continue on the path of boosting production and fighting against the economic blockade imposed by the United States. pic.twitter.com/wN0ffvOsls


According to press reports, Silva highlighted that there are business opportunities in the energy sector, due to Venezuela’s status as the first proven oil reserve and the eighth for natural gas worldwide.

He also referred to the attractions of gold and diamond mining, nature tourism, industry, agriculture, forest wealth and fishing, as well as the possibility of his country becoming a connecting bridge between the Russian market and the Union. Eurasian Economic with the rest of Latin America.

Regarding joint prospects, the general director of the National Committee for Economic Cooperation with Latin American Countries (Cepla), Tatiana Mashkova, said that Venezuela can increase its exports to Russia.

He added that the business community in his country is very interested in investing and creating joint ventures in sectors such as high technologies.

Representatives from a wide variety of economic sectors in addressed the prospects for strengthening and expanding mutually beneficial investment and cooperation. pic.twitter.com/lk5oewSWEy


This binational meeting of businessmen precedes the XV Meeting of the High Level Intergovernmental Commission (CIAN) Russia-Venezuela, which will meet in Moscow for two days starting this Thursday.

According to the press, the 14 editions of the CIAN have made it possible to strengthen 20 areas of cooperation, among which the energy, military and transport sectors stand out.

Regarding the meeting, this Tuesday the Foreign Minister of the Bolivarian Republic of Venezuela, Felix Plasencia, and the Deputy Minister of Foreign Affairs of the Russian Federation, Sergey Vershinin met.