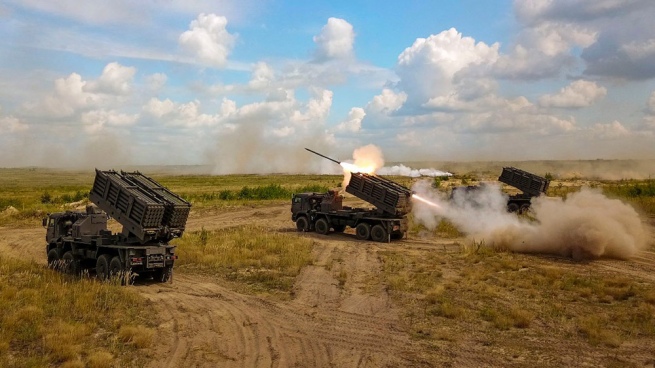 Russia began an invasion of Ukraine on Thursday with bombardments throughout the country, and President Vladimir Putin dismissed international condemnations and sanctions and he warned that any attempted intervention would have “consequences they have never seen.”

Address by the President of the Russian Federation https://t.co/jRvdLQE8TJ

The Ukrainian government said at least 40 people have died so far. in what he called a “large-scale war” initiated by Russia from the east, north and south of the neighboring country. Hours later, the media reported another twenty deaths.

In response, NATO agreed to reinforce its air, land and sea forces on the eastern flank of the US-led military alliancenear the borders of Ukraine and Russia.

President Zelenskyy reached out to me tonight and we just finished speaking. I condemned this unprovoked and unjustified attack by Russian military forces. I briefed him on the steps we are taking to rally international condemnation, including tonight at the UN Security Council.

Ukraine’s Border Guard released footage of what it said were Russian armor entering the country, and loud explosions were heard in Kiev, eastern Kharkov and southern Odessa and Mariupol, CNN reported.

The Russian military said it destroyed all of Ukraine’s air defenses in a matter of hours.Ukrainians were seen fleeing some cities and European authorities declared Ukraine’s airspace a zone of active conflict.

World leaders deplored the start of an invasion that they had been anticipating for weeks and that heralds far-reaching global repercussions.

The Russian attack could cause enormous number of victims, topple the pro-Western Ukrainian government and radically alter the post-Cold War European security and geopolitical balance between the United States and the former Soviet Union.

Governments around the world were preparing more sanctions against Russia after weeks of unsuccessful diplomatic efforts, although the powers have affirmed that they will not intervene militarily to defend Ukraine.

Russia treacherously attacked our state in the morning, as Nazi Germany did in #2WW years. As of today, our countries are on different sides of world history. 🇷🇺 has embarked on a path of evil, but 🇺🇦 is defending itself & won’t give up its freedom no matter what Moscow thinks.

The Government urged the inhabitants to stay in their houses and not to panic, but then Zelensky, in a Facebook post, called on people to take to the streets and protest against the crackdown.

An adviser to Zelensky, adviser Oleksii Arestovich, told the press that some 40 people had been killed in the Russian attacks and several dozen had been injured.

He did not specify whether civilians were among the victims.

“Ukrainian forces are engaged in fierce fighting. The enemy has suffered significant losses that will be even more significant,” Zelensky told reporters, ahead of his Facebook message.

The Ukrainian Army claimed to have killed 50 Russian occupants, and shot down five planes and a helicopter in the east of the country.

In a televised speech in the early morning hours, Putin justified the attack as a way to protect civilians from two breakaway, Russian-speaking regions of eastern Ukraine whose independence it recognized this week.

He accused the United States and its allies of rejecting Russian demands that Ukraine not join NATO and other security guarantees.

He added that his intention was not to occupy Ukraine but “demilitarize” and “denazify” the country and bring to justice those responsible for crimes.

US President Joe Biden called Zelensky to express his “support” and, in a written statement, he condemned “the unprovoked and unjustified attack by the Russian military forces” and assured that “the world will hold Russia responsible.”

🇷🇺🇺🇦 | UKRAINIAN-RUSSIAN WAR: “No to war” and “Stop Putin, stop the war!” shout the approximately 500 protesters in front of the Russian embassy in Paris demonstrating against the Russian attack on Ukraine.
pic.twitter.com/bkNAtGCrWg

The attacks first started from the air, but then Border Guards released footage showing a long line of Russian armor crossing into Ukraine from the Crimean peninsula, which Russia annexed in 2014.

Arestovich, the advisor to the Ukrainian Presidency, said that Russian troops had penetrated some 5 kilometers into Ukrainian territory in the Kharkov and Chernigov regions of northern Ukraine.

The Border Guard later said that ground forces had entered the Kiev region.

The bombing warning sirens were activated in the capital, in Odessa and in Lviv (Lviv), where the United States and other countries had moved their embassies.

The Russian Army claimed that it was attacking Ukrainian military installations with “high-precision weapons”, claiming that they had destroyed anti-aircraft defense systems and put Ukraine’s air bases “out of service”.

The Russian military also said that separatists from the east are advancing and taking control of territories.

Zelensky urged the international community to create an “anti-Putin coalition.”

Putin warned against possible interventions by other countries.

“Whoever tries to obstruct us, not to mention create threats against our country and our people, should know that the Russian response will be immediate and will lead to consequences that they have never seen in history,” he said.

“No one should doubt that a direct attack on our country will bring destruction and horrible consequences for any potential aggressor,” he added.

Biden will meet this Thursday virtually with the leaders of the G7.

Emergency meetings of the leaders of the European Union and NATO are also planned.