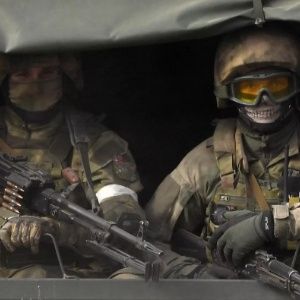 The spokesman for the Russian Defense Ministry, Igor Konashénkov, reported on Monday that the Russian military destroyed weapons and military equipment of the Ukrainian 10th Mountain Assault Brigade near the Malin station, in the Zhitomir province, while they were heading from the city of Ivano-Frankovsk to the Donbas region.

“Sea-based high-precision long-range missiles in the area of ​​​​the Malin railway station in the Zhytomyr region destroyed the weapons and military equipment of the 10 mountain assault brigade of the Forces Armed Forces of Ukraine from Ivano-Frankivsk that were transferred to the Donbas”, the colonel general specified.

On Sunday, Russian missiles hit 48 troop and military-technical assembly areas, as well as six ammunition depots, in towns in the self-styled Republic of Lugansk.

In addition, Konashénkov detailed that the Russian anti-aircraft forces shot down three Su-25 attack planes and 13 drones in different combat zones. In turn, they intercepted two Tochka-U ballistic missiles in Kherson province, along with eight shells from the Smerch multiple rocket launcher system in Kharkov province.

On the other hand, the military entity published this Monday images of the demining of the Azovstal iron and steel plant in Mariúpol.

“Russian demining units carry out engineering reconnaissance and explosive ordnance disposal at the Azovstal plant in Mariupol,” the ministry said in a statement, adding that the engineering units have destroyed more than 100 explosive objects.

According to this organization, the specialists are detecting and deactivating the minefields and the antipersonnel traps with which the nationalists mined the perimeter of the factory and the buildings of its facilities, while removing unexploded ammunition and dangerous weapons.