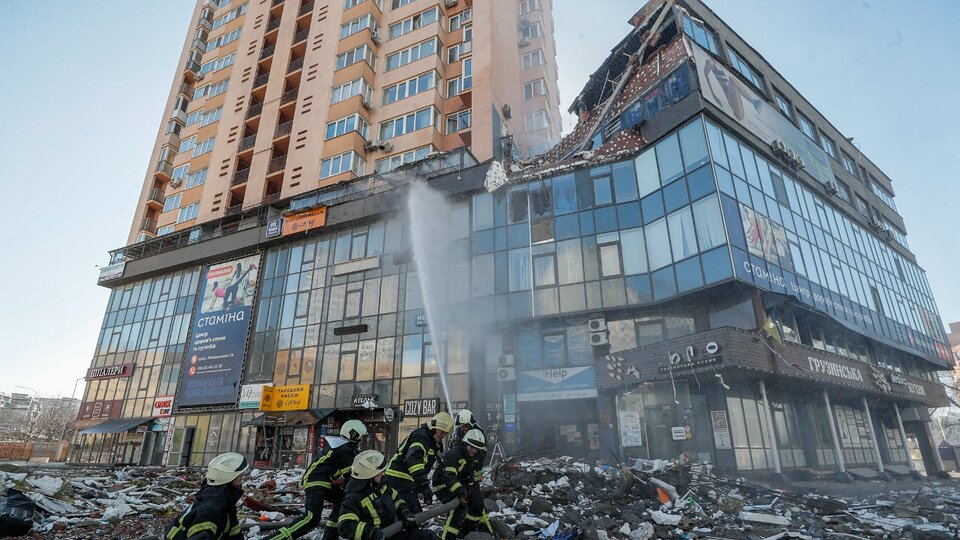 the third day of war between russia and ukraine again focused on the city of Kiev. Ukrainian forces continued to defend the capital against the invasion of Russian troops, which has already caused at least 198 deaths of Ukrainians. In the morning a Russian missile hit a residential building in the capital. The fighting between both sides also reached one of the main avenues in Kiev.

While, The United States approved allocating an additional 350 million dollars in new military assistance for Ukraine to stand up to Russian troops. Germany announced a change of era by sending 1,000 anti-tank grenade launchers and 500 air defense missiles to support Ukraine. For its part, the Russian government ordered its army to start an offensive in all directions. The president of Ukraine, Volodimir Zelenski, stressed that they maintain control of the capital, besieged in recent hours.

Local media reported that before five in the morning about 50 explosions were recorded, as well as machine gun fire near the zoo, just nine kilometers from Maidan Square. They also saw heavy fighting in the town of Vasilkov, near Kiev, where the Russians tried to unload paratroopers, the Ukrainian military reported.

The city of Kiev extended until next Monday the curfew that is in force from 5:00 p.m. to 8:00 a.m. “All civilians on the street during the curfew will be considered members of the enemy’s reconnaissance and sabotage groups,” declared the mayor of the capital, Vitali Klitschko. About eight in the morning a Russian missile hit between the 18th and 21st floors of a residential building in Kiev. Ukrainian Foreign Minister Dmitri Kuleba spoke about Kiev’s resistance to the attacks. “Kiev, our splendid and peaceful city, survived another night of attacks by Russian ground forces and missiles; one of them hit a residential building in Kiev”.

As reported by the Special Communications Service of Ukraine on its Telegram account “In Kiev violent fighting continues and the Ukrainian Army contains the Russian saboteurs.” The Ukrainian army also reported that they managed to “repel” an attack by Russian troops on Victoria Avenue, one of the main streets of the capital. While the Minister of Health, Victor Liashkoindicated that 198 Ukrainians died for the invasion of Russia.

Fighting also took place on the outskirts of the city, such as in the town of Vasilkov, 37 kilometers southwest of the center of Kiev. According to a statement from the Ukrainian military, Russian forces attempted to unload paratroopers in the area and “heavy fighting” ensued.

Meanwhile, the Ukrainian air force reported that it shot down a Russian II-76 plane with paratroopers on board in the same city where one of the military airports of the former Soviet country is also located. Moscow confirmed having full control of the city of Melitopol, located in the southeast of the country near the Sea of ​​Azov and with a population of more than 150,000 people.

The local press also indicated that they detected close to 50 explosions and machine gun fire just nine kilometers from the central Maidan square. They also indicated that there were explosions in the Troieschyna area, northwest of the city, where a thermal power plant is located. At the same time, Donetsk and Lugansk reported shelling by Ukrainian troops “with ammunition prohibited by the Minsk agreements”, which caused seven civilians killed and 15 injured in the last 24 hoursaccording to the Russian news agency Sputnik.

Offensive in all directions

In the diplomatic field, Russia accused Ukraine of refusing to sit at the negotiating table and decided to launch an offensive in all directions. “After the Ukrainian side rejected the process of talks, today all units were given the order to launch an offensive in all directions in accordance with the plan of the operation.”declared at a press conference the spokesman for the Russian Ministry of Defense, Igor Konashenkov. According to the spokesman, “following the Kiev regime’s statements about its readiness for dialogue, combat actions in the main directions of the operation were stopped.” Konashenkov also referred to the advance of separatist militias from Donetsk and Lugansk in eastern Ukraine.

For his part, the President of Ukraine, VOlodimir Zelensky stressed that his country’s forces maintained control of Kiev and managed to “disrupt” Russia’s plan. “We successfully repelled the enemies’ attacks. The fighting continues in many cities and regions of the country, but it is our Army that controls Kiev and the key locations around the capital,” said the president who, according to the British embassy, ​​refused to leave the country. The Zelensky government indicated that some 60 “Russian saboteurs” were killed in the Ukrainian capital.

Meanwhile, military support for Ukraine is on the rise with the recent approval in the United States of an additional $350 million that will be destined to new military assistance for Ukraine before the invasion of Russia, as announced by the Secretary of State in Washington, Antony Blink.

The German government announced this Saturday the urgent decision to send military weapons to Ukraine. The European country had been against the decision to send weapons to conflict zones, a decision that they consider historic despite the fact that Berlin sells weapons to its neighboring countries. According to the chancellor Olaf Scholz it is a change of era. “Russian aggression against Ukraine marks a change of era. It threatens our entire post-war order. In this situation, it is our obligation to support Ukraine to the best of our ability in defending against the invading army of Vladimir Putin,” declared the head of the German government that Ukraine to send 1,000 anti-tank grenade launchers and 500 Stinger air defense missiles belonging to the German armed forces.

Climbing insert on the Ferris wheel: large-scale operation for executives in the Prater