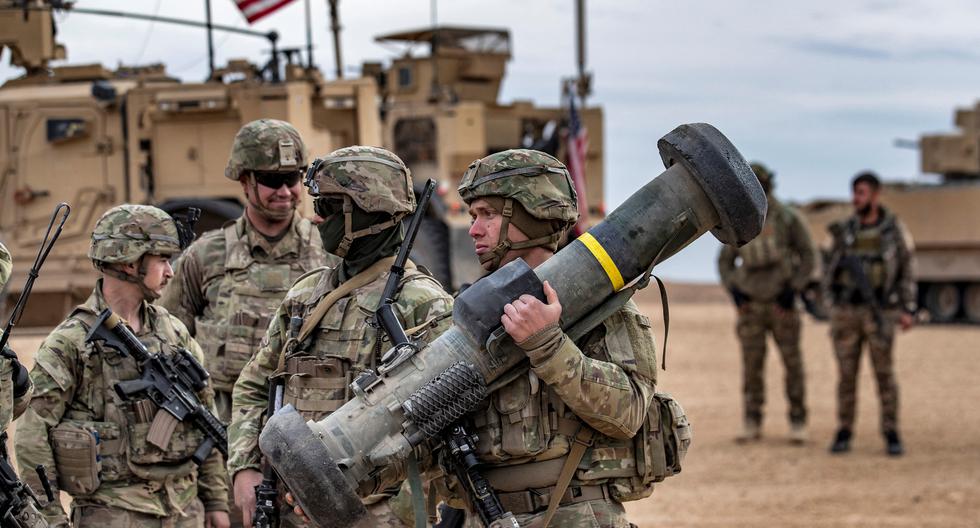 After months of doubts, delays or symbolic or even ridiculous gestures to support militarily Ukraine against the threat of RussiaWestern countries begin to send weapons to Kiev once the invasion begins.

With Ukrainian forces offering stiff resistance to the Russian advance, Western leaders recognize a genuine interest in ensuring that the president Vladimir Putin pay the ultimate price for invasion.

Germany was especially criticized the month before the invasion for sending 5,000 helmets to Ukrainea gesture that left “speechless” the mayor of Kiev, the former world boxing champion Vitali Klichko. “What will they send us next? pillows?” told the Bild newspaper.

When diplomatic efforts were still alive to avoid conflict, France and other Western countries feared that the arms shipments might provoke Putin. But when the Kremlin leader launched the attack on February 24, the situation changed.

Germany said on Saturday it would send Ukraine 1,000 anti-tank rocket launchers and 500 Stinger-type surface-to-air missiles.a 180-degree turn from its old policy of not exporting weapons to conflict zones.

France was also sending defensive weapons to Kiev, according to its armed forces. The Ukrainian embassy in Paris indicated that it had particularly requested anti-aircraft equipment.

And on Saturday night, the French presidency announced that will send more fuel and military equipment to Ukrainein addition to reinforcing economic sanctions against Russia.

the ukrainian president, Volodymyr Zelenskythanked his counterpart Emmanuel Macron “for having responded to the requests of Ukraine in terms of defensive military equipment”, indicated the Elysee.

The Ukrainian leader had indicated on Saturday that his “allies” were sending weapons to help Kiev fight Russian troops. “Weapons and equipment from our allies are on their way to Ukraine. The anti-war coalition is working!” wrote.

And after the German announcement, he tweeted: “Let’s keep it up!”

They were not the only contributions.

Belgium announced the supply of 2,000 machine guns and 3,800 tons of fuel, the Netherlands the shipment of sniper rifles, helmets and soon 200 Stinger missiles; and the Czech Republic handed over 30,000 pistols, 7,000 assault rifles, 3,000 machine guns, several dozen sniper weapons and one million cartridges.

What’s more, The United States will provide Ukraine with additional military equipment valued at 350 million dollars to counter “the brutal and unprovoked assault” by Russia, its Secretary of State, Antony Blinken, announced on Saturday.

Among the material that will reach the hands of the defending troops are the Javelina powerful anti-tank system that could penetrate one of the most powerful weapons in the Kremlin until they are rendered useless, tanks. “The Javelins will be on this next stage as they have been on so many stages in the past.”a senior defense official told Pentagon reporters on Saturday.

“I can confirm that you have received military aid from us in recent days”said a Pentagon official, adding that the lot announced on Saturday includes modern anti-tank missiles Javelin used by the US military.

Britain has said it is willing to provide more military support, including lethal defensive weapons.

But it is uncertain whether this wave of shipments can make a difference when, according to analysts, Moscow has not yet used even half of the some 180,000 troops deployed on Ukraine’s borders with Russia and Belarus.

No time to waste”

Russia’s defense minister said on Saturday that his army had been ordered to expand its offensive against Ukraine “from all directions” after Kiev refused to hold talks in Belarus.

The problem is that few “genuinely believed” in an invasion of all of Ukraine, “not even Zelensky,” said Gen. Vincent Desportes, a former director of France’s prestigious War College, which trained top officers.

Now “everyone does what they can” but “no one has trillions of supplemental weapons. All European armies are under-equipped,” he told AFP. “When you ship 2,000 machine guns, you draw them from your own arsenal. European armies are poor armies,” she insisted.

Diplomats at NATO headquarters say there is an interest in slowing the Russian advance and making the invasion costly for Putin.

A member of the French presidential office said a combination of Ukrainian resistance and sanctions against Russia could help force a ceasefire.

Polish Prime Minister Mateusz Morawiecki criticized the lack of Western aid so far. Ukrainians “are fighting for us, for our freedom, our sovereignty, so that we are not the next.”

“Russia wants to destroy our world as we know it. We have to act now. There is no time to waste,” she said.

should fish be avoided or favored?

Belgium will deploy 300 soldiers in Romania