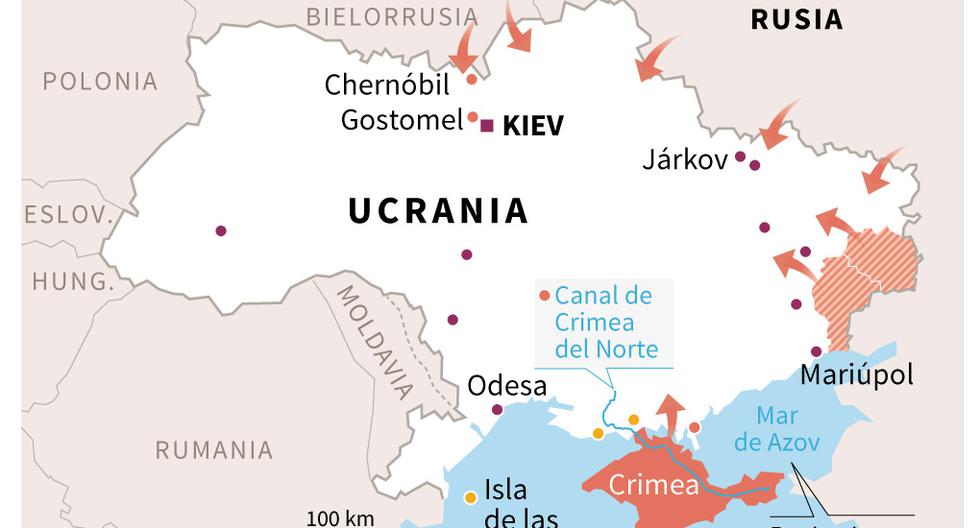 The start of a Russian military offensive against Ukraine This Thursday provoked a chain of reactions in the world.

SIGHT: Why did Russia invade Ukraine and what are Putin’s arguments for war?

“Peaceful Ukrainian cities are under attack. It is a war of aggression. Ukraine will defend and win. The world can and must stop a Putin. Now is the time to act,” Ukrainian Foreign Minister Dmytro Kuleba wrote on Twitter.

“President Putin has chosen a premeditated war that will bring catastrophic loss of life and human suffering,” Biden said in a statement. “Russia alone is responsible for the death and destruction that this attack will cause,” Biden insisted, after assuring that “the world will hold Russia responsible.”

SIGHT: Biden denounces the “unjustified attack” on Ukraine and says the world will “hold Russia to account”

The Russian offensive “must stop now,” UN Secretary-General Antonio Guterres implored after an emergency meeting of the Security Council.

“President Putin, in the name of humanity, bring the troops back to Russia,” said Guterres, after stating that this is “the saddest day” he has had at the head of the UN.

“We strongly condemn Russia’s unjustified attack on Ukraine. In these dark hours, our thoughts are with Ukraine and the innocent women, men and children facing this unprovoked attack and in fear for their lives,” said European Commission President Ursula von der Leyen.

China said it was “closely monitoring” the situation in Ukraine, avoided condemning Russia and called for an end to the escalation. “We urge all parties to act with restraint to prevent the situation from getting out of control,” Chinese diplomatic spokeswoman Hua Chunying told the press. Just before, the Russian leader had insisted that Russian interests were not “negotiable ”, although he mentioned the possibility of a “direct and honest dialogue with the West”.

On Monday, he even questioned the very legitimacy of Ukraine’s existence, accusing it of being an instrument in the hands of NATO’s anti-Russian policy of aggression.

SIGHT: LIVE | Ukraine compares bombing of Kiev to that of Nazi Germany in 1941

“Russia chose war. France condemns in the strongest terms the launch of these operations.”denounced the French ambassador to the UN, Nicolas de Rivière.

British Prime Minister Boris Johnson condemned the “horrendous events in Ukraine” and argued that Putin “chose the path of bloodshed and destruction by launching an unprovoked attack.”

“I strongly condemn Russia’s irresponsible and unprovoked attack on Ukraine, which puts countless civilian lives at risk. Once again, despite our repeated warnings and tireless efforts to engage in diplomacy, Russia has chosen the path of aggression against an independent and sovereign country,” Stoltenberg said in a statement.

He assured that “NATO will do whatever is necessary to protect and defend all its allies.”

The head of the Italian government, Mario Draghi, described the Russian attack on Ukraine as “unjust and unjustifiable” and guaranteed that the European Union (EU) and NATO will work to provide an immediate response.

“The Italian government condemns Russia’s attack on Ukraine. It is unfair and unjustifiable. Italy stands with the Ukrainian people and institutions at this dramatic moment,” Draghi said in a statement.

The Council of Europe, an intergovernmental organization to which Russia belongs and which imposed sanctions on Moscow after the annexation of Crimea in 2014, “strongly” condemned the Russian military offensive in Ukraine as a “flagrant violation” of its statute and promised to take “measures quick to respond to the current situation”, while asking the Russian authorities “for the immediate and unconditional cessation of hostilities”.

Australian Prime Minister Scott Morrison condemned Russia’s “illegal invasion” by announcing a “second round” of sanctions against four financial institutions and 25 individuals from four entities involved in the development and sale of military equipment.

“The Government of Spain condemns Russia’s aggression against Ukraine and stands in solidarity with the Government and the Ukrainian people,” tweeted the President of the Spanish Government, Pedro Sánchez.

The Mexican president, Andrés Manuel López Obrador, affirmed this Thursday that his country’s foreign policy will continue “promoting that there is dialogue, that force is not used, that there is no invasion.”

“We are not in favor of any war, Mexico is a country that has always stood for peace and for the peaceful solution of disputes”he added.

According to Foreign Minister Marcelo Ebrard, “Mexico’s position has been very clear, both in the previous stage and as of last night, and it will continue to be so. We are going to be very clearly against the use of force, against questioning the integrity of an independent country that is Ukraine, in favor of United Nations resolutions, in favor of the call and the position of the secretary general of the United Nations”.

Brazil noted that “it follows with serious concern the explosion of military operations” by Russia and appealed for “the immediate suspension of hostilities,” according to a statement from the Foreign Ministry.

The Vice President of Brazil, Hamilton Mourao, said in statements to the press that “Brazil does not position itself as neutral. Brazil made it very clear that it respects the sovereignty of Ukraine. So Brazil does not agree with an invasion of Ukrainian territory.”

The Casa Rosada rejected “the use of armed force”, “for this reason it calls on the Russian Federation to cease military actions in Ukraine”, and asked to respect the UN Charter and act with “the greatest prudence” in order to de-escalate the conflict.

The president of Colombia, Iván Duque, rejected on Twitter “the premeditated and unjustified attack that has been perpetrated against the Ukrainian people by Russia.”

“Not only does it attack its sovereignty but it threatens world peace,” he added.

On Ukraine 68 Colombians live and 28 foreigners who are part of their family nucleus. The government announced diplomatic efforts to “facilitate” its “exit from Ukrainian territory,” according to a statement by Duque from the presidential headquarters in Bogotá.

The Chilean president, Sebastián Piñera, issued a statement on his social networks in which he affirms that the country “condemns the armed aggression of Russia and its violation of the sovereignty and territorial integrity of Ukraine. These acts violate international law and threaten innocent lives, international peace and security. Chile urges Russia to respect the Geneva Conventions on international humanitarian law. We will collaborate with other countries to seek a peaceful solution to the conflict, within the framework of international law and the United Nations charter”. According to the Chilean Foreign Ministry there are at least 53 Chileans in different cities of Ukraine.

So far, Venezuela has not officially reacted to the Russian invasion in Ukraine, but President Nicolás Maduro made clear on Tuesday his support for the actions of his Russian counterpart, Vladimir Putin. “Venezuela is with Putin, it is with Russia, it is with the brave and just causes of the world, and we are going to ally ourselves more and more,” Maduro said. After the announcement of the “military operation” by Russia, the considered number two of Chavismo, Diosdado Cabello, expressed his wish that “there be no war.” The Minister of Communication, Freddy Ñáñez, wrote on Twitter that “the objective of the operation is to protect people who have been subjected to abuse and genocide by the neo-Nazi regime for eight years”, in line with the Kremlin’s speech.

“Ecuador believes in multilateralism and is willing to respect and support the decisions made by the Security Council” of the UN, said the country’s president, Guillermo Lasso, on Thursday.

“We reject any act of war that puts the civilian population on alert,” Foreign Minister Juan Carlos Holguín previously wrote on Twitter.

Some 700 Ecuadorians are in Ukraine.

In a tweet from its Foreign Ministry, Peru expressed its deep concern about the evolution of events in Ukrainerejected the use of force and reiterated his call to cease all hostilities and violations of the ceasefire in Ukraine.

Nicaraguan President Daniel Ortega welcomed last Monday the decision of his Russian counterpart and ally, Vladimir Putin, to recognize the independence of two regions in eastern Nicaragua. Ukraine and accused the United States and Europe of wanting to liquidate Moscow.

“This decision made by President Putin opens the possibility that this situation will not have a major outcome,” said Ortega.

President Miguel Díaz-Canel, who met on Wednesday in Havana with the president of the Duma, Viacheslav Volodin, later expressed “his solidarity with Russia, given the imposition of sanctions and the expansion of NATO towards its borders.”

In a statement, Uruguay stated its “rejection of the threat or use of force” and that “the peaceful settlement of disputes constitutes guiding principles of Uruguay’s foreign policy and in accordance with them, our country encourages the parties involved to continue with diplomatic negotiations and the search for political agreements, as the only way to resolve the existing conflict of interest.

is a fourth dose necessary for the whole population?

the Blues offer a demonstration in Scotland