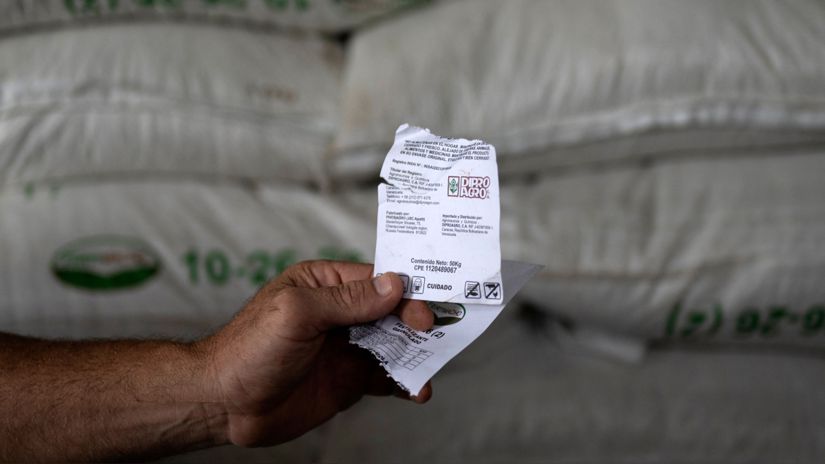 Thousands of sacks of fertilizer they fill sheds, including tractors and machinery, ready for planting… but they are insufficient. A war 10,000 km away will have consequences in Portuguesa, an agricultural region considered the “barn” of Venezuela.

This is not an isolated case: the Russian invasion of Ukraineboth suppliers of fertilizers for Latin America, opens a race throughout the region.

“10 26 26”, reads on sacks of Russian fertilizer used by producers in Turén (Portuguesa state, west). Those figures reflect the chemical composition of the little white spheres that fill those sacks: 10% nitrogen, 26% phosphorus and 26% potassium.

A downpour falls at the beginning of the rainy season and it is time to prepare the soil to plant corn, vital in the diet of Venezuelans and the basis of the traditional arepas.

Russia is the largest exporter of fertilizers in the world, with sales of 7,600 million dollars per year in 2020, according to the Economic Observatory of Competitiveness (OEC), practically paralyzed by the war and the international sanctions derived from the conflict.

Its production covered 12.1% of the global supply.

80% of the 180,000 metric tons of fertilizers required annually in Venezuela was imported mainly from Russia, but also from Ukraine and Belarus, according to the union of agricultural producers (Fedeagro).

“Thank God we were able to buy fertilizers from Russia in business rounds in October and November, we paid in December and they were able to arrive in February and March,” Celso Fantinel, president of Fedeagro, told AFP.

Fantinel warns, however, about a deficit equivalent to a third of the demand. And there is no time to cover it: the weather does not wait.

“We are producing at 30% of our capacity” after a deep drop due to the economic crisis of recent years “and, even so, that 30% does not have the fertilizers complete,” lamented Ramón Bolotín, president of the Association of Independent Agricultural Producers (PAI) in Turén.

“Chemical fertilizers are essential” for soil productivity, he adds, in a country of 30 million people where “3% of the population feeds the other 97%.”

It is an unexpected problem for Venezuelan farmers, who face both the shortage of combustible due to the collapse of the oil sector.

The fertilizer deficit is a huge obstacle. A good one fertilization makes a difference: one hectare of corn fields can produce a harvest of 10 tons, but that figure, depending on the conditions, can drop to three or four tons.

And all of Latin America shares the problem.

Last year, giant Brazil imported 80.9% of the 40.5 million tons of fertilizers it used, and 20% of those imports came from Russia, according to the government. Argentina imported 60% of the 6.6 million tons it used and 15% of the purchases were made from Russian suppliers.

Mexico, Ecuador, Colombia and Peru also have, to a greater or lesser degree, dependence on fertilizers Russians.

On March 3, the Ecuadorian president, Guillermo Lasso, announced that his government will import fertilizers to subsidize them in the face of the “increase in the price of agricultural inputs” due to the international crisis.

The OAS expressed this week its “serious concern” about the effect of the increase in the price of fertilizers on food production in the region. A resolution of the agency indicates, based on figures from the World Bank, an increase of 178% in the cost of fertilizers between March 2021 and March 2022.

Venezuela begins its sowing cycle of essential items such as corn and rice.

The collapse of the oil industry had an impact on the petrochemical industry, which previously covered the internal demand for fertilizers.

“That has been very noticeable,” explains Osman Quero, vice president of Fedeagro. “In the last three years we have been bringing the fertilizers ourselves” through intermediaries.

Producers ask to reactivate the Morón petrochemical complex (Carabobo state, north), renamed with the name of the late socialist president Hugo Chávez. It has, according to the state-owned PDVSA, an installed capacity to produce 150,000 metric tons of nitrogenous and phosphated fertilizers per year.

The complex has been semi-paralyzed since 2017.

“We have two fundamental ingredients: the urea (nitrogen) and phosphorus and we would only need to import potassium chloride,” explains Fantinel.

Alternatives are being explored, but other exporters, due to the situation in Russia, have stopped their sales in order to reserve fertilizer for their domestic markets.

Rubén Carrasco, an agricultural expert at the Lima Chamber of Commerce, told AFP that Russia is seeking triangulations with countries like Norway to return to the market.

“Maybe next year other alternative sources will be tried,” Bolotín consoles himself in Venezuela. (AFP)

RPP PODCAST | Monkeypox will not cause outbreaks that require quarantines

Vaud: A detention officer and a detainee arrested at the plain of the Orbe