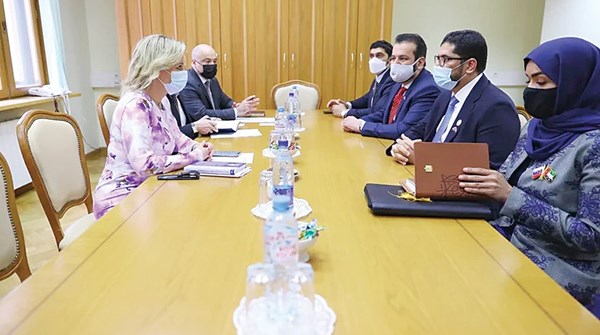 Dmitry Peskov, spokesman for the Russian presidency, received at the presidential residence in the Kremlin a delegation of the Emirates News Agency “WAM” headed by Mohammed Jalal Al Raisi, director general of the agency. The meeting was attended by Dr. Mohammed Ahmed bin Sultan Al Jaber, UAE Ambassador and Extraordinary Plenipotentiary to the Russian Federation. Mohammed Jalal Al Raisi stressed the importance of the fruitful visit of the Emirates News Agency (WAM) delegation to the Russian Federation, which came as an embodiment of the UAE-Russian strategic relations, which are witnessing continuous growth and development at various levels, under the support and patronage of the leaderships of the two friendly countries. He thanked the official spokesperson for the Presidency of the Russian Federation for the warm reception, stressing the Emirates News Agency’s keenness to enhance joint cooperation with Russian media institutions and exchange experiences, especially since the UAE hosts the Expo 2020 Dubai at the end of this year, during which we are keen to provide all I support the international media to carry out their mission to fully cover this prominent global event. Dmitry Peskov welcomed the Director General of the Emirates News Agency “WAM” and the accompanying delegation, praising the continuous growth and development in the bilateral relations between the UAE and the Russian Federation at various levels, especially economic and investment. Maria Zakharova, the official spokeswoman for the Russian Foreign Ministry, Director of the Ministry’s Press and Information Department, also received the Emirates News Agency delegation, stressing the importance of this visit in opening wider prospects for joint cooperation between the Emirates News Agency and Russian media institutions. The WAM delegation had met earlier with a number of Russian journalists and writers, and during the meeting, they exchanged views on ways to enhance prospects for joint media cooperation between the UAE and Russia, based on the strategic relations between the two friendly countries.