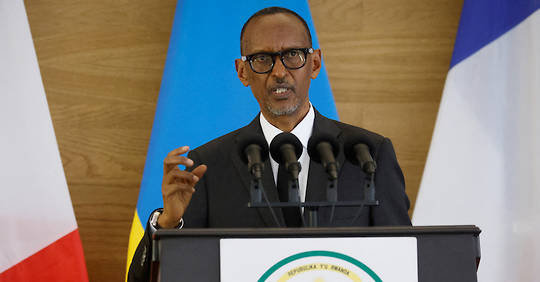 « C’is a big step, we must accept it ”: the Rwandan president Paul Kagame explains having chosen to recognize the work of France on its role in the genocide of 1994, even if it did not lead to an apology, in an interview with Agence France-Presse and France Inter. French President Emmanuel Macron visited the Rwandan capital Kigali on Thursday to “recognize [les] responsibilities ”of France in this tragedy, which left at least 800,000 dead, mainly in the Tutsi minority. But she was “not an accomplice”, underlined the French leader.

The apologies or requests for forgiveness expected by the survivors and the families of the victims did not take place. Former leader of the Tutsi rebellion who has regularly accused France of complicity in the genocide of spring 1994, President Kagame, for his part, praised the words of his counterpart which have “more value than excuses”.

READ ALSONicolas Sarkozy: “Reconciliation with Rwanda could not wait”

On this very complex subject, “there is no entirely satisfactory answer,” he explained in an interview with Agence France-Presse and France Inter on Friday evening: “But it’s a big step. . We have to recognize it, accept it and work towards other stages. “Someone can come and say, ‘I’m sorry, I’m sorry,’ there will always be people saying, ‘It’s not enough.’ And that’s their right. […] I do not believe that there is a miracle solution, something that will come to solve everything, ”he believes.

“Does that answer all the questions people ask?” I do not think so. Do survivors have the right to challenge? They have the right. “” I have never claimed to be the judge, the final arbiter of what is to be said or done, he asserts, but we must not allow the acrimony or misunderstandings around the truth to continue, we must be able to be sensitive to the feelings and opinions of the survivors directly, specifically and also to the future that each one has to live. “

“If justice is done in France against these people, I will be happy”

Beyond the visit and the words of Emmanuel Macron’s speech, the Rwandan leader says he recognizes the approach he has taken in recent years, including the establishment of a commission of historians, headed by Vincent Duclert. In a report submitted at the end of March, it concluded on the “heavy and overwhelming responsibilities” of France and the “blindness” of the then socialist president François Mitterrand and his entourage in the face of the racist and genocidal drift of the Hutu government supported by Paris.

A Rwandan report published a few weeks later affirms that “the French state bears a heavy responsibility for having made possible a foreseeable genocide”. These two commissions have “established facts” and “say almost the same thing, but in a different way”, estimates Paul Kagame. The Rwandan president places Emmanuel Macron in front of his commitment, made Thursday, that “no person suspected of crimes of genocide can escape the work of the judges”.

He’s not asking for extradition. “If justice is done in France against these people, I will be happy. I don’t have to say, “It will only be justice if you give them to me and we judge them in our courts.” Justice is justice. “I am not specific about the form, but specific about the fact that these people have serious crimes against them, for which they must be held responsible,” he said.

However, he refuses to comment on the request for the dismissal of the Paris prosecutor’s office on the Bisesero massacre, where associations accuse the French army of “complicity in genocide”. “It’s not for me to decide,” he says. Thursday’s stage, imperfect as it is, lays the foundations for a “better and deeper relationship between Rwanda and France”, he said.

Some detractors of the regime believe, however, that this reconciliation is done at the expense of human rights, accusing France of remaining silent on the attacks denounced by activists and NGOs (press freedom violated, opposition muzzled, deaths in detention … ). “I do not see anything bad, which one would qualify as bad, which occurs here and which does not occur where you come from”, retorts it to the French journalists: “When it occurs at the others, no one gets involved. When it is here, our problems have to be dealt with from the outside, or they are created from the outside. “” Every day we are shot at. Lots of lies, by the hundreds, ”he asserts.

READ ALSOFrance-Rwanda: these “steps forward” that can change everything

Strong man of the country since 1994, president since 2000, Paul Kagame had the Constitution amended in 2015, which theoretically allows him to remain in power until 2034. The next election, in 2024, is still a long way off, he assures- he, affirming that he is currently devoted to the problems of his country and of the continent: “I don’t think much about it, I don’t care. “