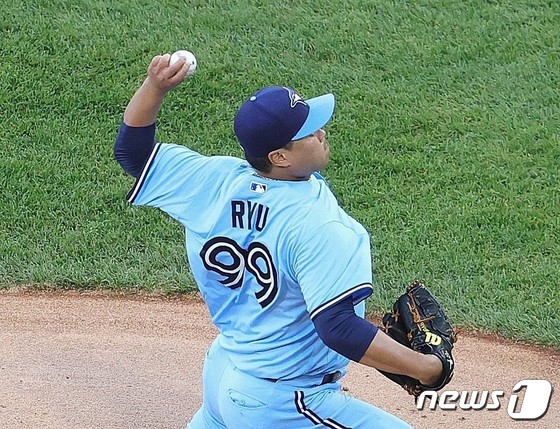 Ryu Hyun-jin (34, Toronto Blue Jays)’s six-win challenge in the season was canceled. He struggled by allowing three runs in the first inning against the Chicago White Sox, and had to swallow his disappointment as the lack of scoring support from the Toronto line-up was intertwined.

Ryu Hyun-jin started the away game against the MLB White Sox at the Guaranteed Rate Field in Chicago, Illinois, USA on the 11th (Korean time), and recorded 5 hits (1 homer), 1 walk, 3 strikeouts in 6 innings. . He pitched 95 and his ERA slightly increased from 3.23 to 3.34.

Ryu Hyun-jin, who was sluggish with 7 hits (2 homers), 3 walks, 1 strikeout and 7 runs (6 earned runs) in 5└ innings against the Houston Astros on the 5th, succeeded in reversing that day. He conceded three runs in the bottom of the first inning, but then effectively blocked the White Sox lineup. However, with the team behind 2-3, he did not meet the requirements for a substitute and a winning pitcher.

It was the first White Sox batting line he faced after entering the major leagues, and Ryu Hyun-jin suffered from difficulties from the end of the first inning. Leading batsman Tim Anderson did a good job with a ground ball from shortstop, but at the end of the full count, Ermin Mercedes hit a double. Left fielder Luerdes Gurriel Jr.’s sloppy defense was disappointing.

He wanted to get over the hurdle by flying out Yoan Moncada to center field, but he allowed a long hit in a row.

Jose Abreu pushed Hyun-Jin Ryu’s 86.7 mph cutter to hit a double with a RBI, followed by Yasmani Grandal who hit Ryu Hyun-jin’s first ball (88.8 mph fastball) and hit a dominant home run. The batted ball hit the right wall of the outfield. It was Ryu Hyun-jin’s ninth home run of the season.

Hyun-Jin Ryu induced Andrew Vaughn to ground the shortstop and finished the first inning with difficulty. It is the first time in 12 games of the season that Ryu Hyun-jin conceded three points in one inning.

Ryu Hyun-jin finished the third inning without a run. He caught Anderson with a ground ball at second base and out for five consecutive batters, but Mercedes hit a heavy hit at the end of the ninth inning. But against Moncada, he struck out looking with an exquisite 86.1 mph cutter. It was his first strikeout after facing 12 batters that day.

Ryu Hyun-jin threw a 78.8-mile changeup against Abreu, who met again, and induced a shortstop ground ball to catch the third out in the bottom of the third inning.

In the bottom of the fourth inning, he conceded one hit and one walk, but did not concede. Ryu Hyun-jin walked Grandal, who allowed a home run, but treated Bon as a shot and eliminated a runner on base. Then, the ball thrown at Garcia was hit and hit, but he had to pay Engel to catch it with a ground ball.

Ryu Hyun-jin made a triplets in the bottom of the 5th inning. He flew Mendick to right field, struck out Anderson, and grounded Mercedes to second base. He was the first to out by using an 80 mph changeup as a decisive ball against Mercedes, who had multi-hit in the previous two fights.

Ryu Hyun-jin pitched neatly in the bottom of the 6th inning, where he played the third match against the White Sox’s central batting line. After lightly hitting Moncada and Abreu, he struck out Grandal with a 73.7 mph curve in the swing.

Ryu Hyun-jin, who was replaced after the end of the 7th inning, recorded his 6th quality start of the season. However, the Toronto batting line failed to capture Dallas Keuchel (6 innings, 6 hits, 8 strikeouts and 2 runs), and only two points to Ryu Hyun-jin.

In the 5th inning, which was 0-3, Marcus Semien’s one RBI hit came, but Bo Bisett was withdrawn by a strikeout out in the following two-off first and third bases.

In the first half of the 6th, Guriel Jr. hit at 2nd and 3rd base, and 3rd base runner Vladimir Guerrero Jr. was called home and chased 2-3. Joe Panic’s walk created a two-of-a-kind opportunity for first and second bases, but Riley Adams hit the ball in center field.

If the match ends like this, Hyun-Jin Ryu will record his fourth loss of the season.