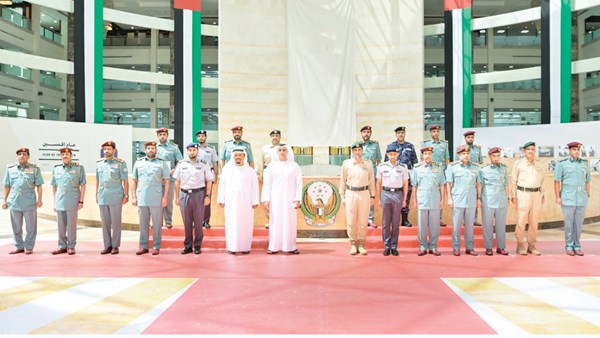 Lieutenant-General Sheikh Saif bin Zayed Al Nahyan, Deputy Prime Minister and Minister of Interior in Abu Dhabi, attended the ceremony of distributing institutional accreditation certificates for colleges, academies, and police and security institutes by the Security Qualifications Center at the Ministry, “the body that grants police and security qualifications”, so that these institutes are centers that obtain the authority to offer And managing police and security qualifications in accordance with the requirements of the professional qualifications system.
His Highness witnessed the delivery of accreditation certificates to representatives of the Police College in the Ministry of Interior, the Saif bin Zayed Academy in Abu Dhabi, the Dubai Police Academy, the Sharjah Police Academy, the Civil Defense Academy, the Special Security Forces Institute, the Institute of Police Sciences and Technology, and the National Security Institute.
The importance of this step in institutional accreditation is to ensure the unification of police training and qualification programs in these academies and at the level of the general police leadership in the country, in addition to raising the efficiency and quality of training outputs in the police and security fields, and investing in human cadres, by qualifying them with the latest scientific and practical methods, according to International best practices in vocational training.
These educational institutions became the first training centers registered in the country, according to which they obtain the authority to offer and manage police and security qualifications approved in accordance with the requirements of the professional qualifications system.
This came as a result of the efforts made by these institutions and their keenness to invest in the latest quality assurance tools and practices in various environments of vocational training and education, derived from the UAE National Qualifications System, to ensure optimal employment of vocational training capabilities and methodologies in the service of offering and managing approved qualifications according to the best modern training and education methods. .
The ceremony was attended by His Excellency Lieutenant-General Dhahi Khalfan Tamim, Deputy Chief of Police and Public Security in Dubai, His Excellency Lieutenant-General Abdullah Khalifa Al Marri, Commander-in-Chief of Dubai Police, and His Excellency Major General Faris Khalaf Al Mazrouei, Commander-in-Chief of Abu Dhabi Police.

Who are the Mexicans with the prettiest waist?