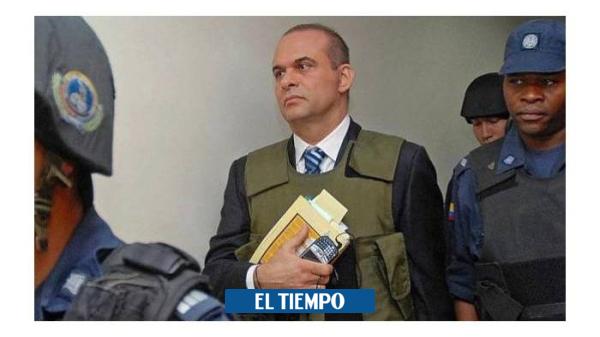 Yesterday, Sunday, at around 8:30 in the morning, US officials were in charge of confirming to the Government of Colombia the news – revealed exclusively by EL TIEMPO – that the deportation of the former paramilitary chief Salvatore Mancuso a Italy it had been canceled.

Despite the fact that a federal judge ordered his shipment to Rome, before September 4 (for violation of his right to liberty and alleged political motives to extradite him to Colombia), sources in Washington confirmed to the House of Nariño the arguments revealed by EL TIEMPO: for reasons of national security and foreign policy, it was decided to deport him to Bogotá.

(We invite you to read: The US decides to deport Mancuso to Colombia)

Reporters from this newspaper established that Mancuso was made aware of the administrative decision on Saturday, at 11:20 in the morning, by Tom Giles, director of the Atlanta Immigration Office. In addition, it was learned that the Government of Colombia will not be officially notified, as it is not part of the process.

(You may be interested in: U.S. Mail Says Mancuso Will Be Deported Sept. 4)

Thus, the change in the deportation destination, supported by the United States Penal Code, was notified on Saturday, after two weeks of intense lobbying by Colombian officials. Sources in Washington revealed that, from Bogotá, contacts of the highest level were made with officials of the Trump administration, including its ambassador to Colombia, Philip S. Goldberg.

For reasons of national security and foreign policy, it was decided to deport Salvatore Mancuso to Bogotá.

And they went further.

“The Colombian ambassador in Washington, Francisco Santos, played a key role. The message of who Mancuso is was delivered to the White House through President Trump’s special adviser for the Western Hemisphere, Mauricio Claver-Carone, “sources in Washington told EL TIEMPO.

Claver-Carone (US candidate for the IDB) He was in Colombia recently, with National Security Advisor Robert O’Brien. Both held meetings with President Duque to discuss security, economic and Venezuela issues.
The decision to redirect the deportation changes the judicial board that will define the fate of the former paramilitary, accused of more than 136 massacres, which left about 800 dead.

Philip Goldberg, the US ambassador to Colombia, was key in the US decision.

Senior government officials assured this newspaper that, to guarantee that Mancuso returns to respond to the victims and to justice, the fourth extradition request is ongoing, after a string of errors. But the US move left the door open for him to stay in Miami.

And that is what his defense will point to, which, in addition, is going to appeal the decision to deport him to Colombia and not to Italy, where Mancuso is a citizen, because of his father’s origin. And it has no debts with the justice of that country, despite its links with the Calabrian mafia.

(We invite you to read: ‘Mancuso has 3 Interpol red circulars in force’: Government
)

Indeed, in the document in which he is ordered to be deported to Colombia, it is made clear that Mancuso can make use of the so-called Convention against Torture, which has already allowed several Colombian drug traffickers to stay in that country claiming risk to his life.

I was the first to obtain the benefit that Mancuso seeks. It may take 4 months, but it must be demonstrated that institutional actors are those who put the safety of the person at risk

“I was the first to get that benefit. It may take about 4 months, but it must be demonstrated that institutional actors are those who put the safety of the person at risk. It is useless to argue mafia vendettas. In my case, I proved that a corrupt general could eliminate me. It’s a tough fight, ”Carlos Ramón Zapata, formerly of the Medellín cartel, told EL TIEMPO.

But Mancuso’s defense is not going to be easy. Although these antecedents exist, the government of Donald Trump has raised the standards to grant this type of protection, as well as for naturalization, another of the paths that Mancuso could travel (see attached note).

Francisco Santos, Colombian ambassador to the United States, moved diplomatic strings to achieve the support of the Trump government.
.

Furthermore, it is already clear that the Trump government It is playing on the side of the Government of Colombia, its ally on key issues (and more so in full elections in the United States), such as Venezuela, Iran and the fight against drug trafficking.

EL TIEMPO spoke with well-known Cuban-American lawyer Joaquín Pérez, who succeeded in getting Judge Richard J. Leon to order Mancuso’s deportation to Rome and who took his case from his extradition from Colombia (2008) to his conviction in the United States.

Although Pérez abstained from commenting on the decision to stop his client’s deportation to Italy, he said that what is happening “is a political hunt.” In fact, Pérez – known for representing bosses and paramilitaries of the stature of Carlos Castaño, Nicolás Bergonzoli and Rodrigo Tovar Pupo, alias Jorge 40 – had already alleged before the federal judge that even President Iván Duque intervened in the Mancuso case.

And it is taken for granted that in any of the legal paths that Mancuso takes in the United States, he will argue that Colombia used political and diplomatic pressure to prevent his freedom.

In any case, the defense of Mancuso in Colombia, led by criminal lawyer Jaime Paeres, ratified his client’s will to continue contributing to the truth of the armed conflict.

In fact, the Government said that the ‘expara’ has been summoned to 263 free version hearings and has been presented to 188, in which he has confessed his participation in massacres such as that of El Aro.

For his part, the attorney general, Fernando Carrillo, confirmed that he opened an investigation to establish who or who are responsible for the judicial errors that Colombia committed in Mancuso’s extradition proceedings.