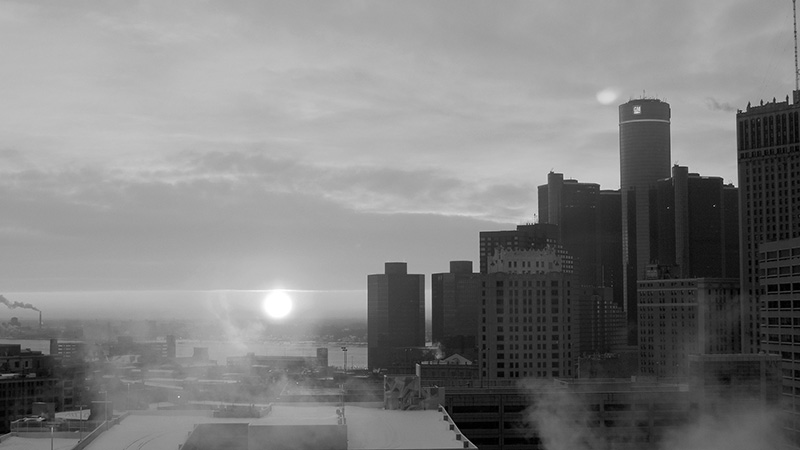 Declared bankrupt in 2013, Detroit is a warning for French agglomerations: the capture of the middle classes and businesses by the periphery and the resulting weakening of the city center are, in the long term, a losing bet for the whole of the country. territory.

We would so much like to believe in a rebirth … Yet the rare good news does not change anything: Detroit has not returned from hell where it has been plunged by race riots, relocations, the economic crisis, the choice of mono-industry . After having vampirized the center, the periphery in turn atrophies. The Donut effect is followed by a generalized impoverishment of the metropolis and the State of Michigan, testifying thereby that it is complicated to continue to fly when the main engine begins to seize up.

The first problem, and not the least, the automobile has allowed urban sprawl as far as the eye can see. The city of Detroit does not exist. Or at least not really. It is very extensive, certainly much less than Los Angeles, but three times more than the Big Apple or Paris. Above all, it is much less dense: only 1,800 inhabitants / km² against 3,000 for Los Angeles, 4,400 for Chicago, 7,000 for New York. And let’s not talk about downtown, an extremely rare reality in the United States, if we except New York, Chicago and San Francisco. Not only is Downtown an administrative and economic center deserted at night and on weekends but, to make matters worse, Detroit has several poles separated by distances impossible to cover on foot and that no public transport is available. really connects.

Demographic decline and the end of social diversity

The madness of grandeur which animated the city is only a distant memory. Detroit has lost two-thirds of its population since 1950. The effect of racial segregation has played its part. Today 80% of the inhabitants are black. The 10% of whites who continue to reside there are concentrated in a few neighborhoods in the north-west and east. Illustrating the Donut effect, the city has emptied itself of its population, its middle classes and its activities for the benefit of the cities of the periphery.

To have seen it with my own eyes, the passage from Detroit to its suburb is a unique border effect. Surreal even. In a matter of minutes, the decay and urban wasteland disappear in favor of busy, clean streets, smart shops and an all-white population. We almost rub our eyes just to make sure that it is not an illusion as the contrast is so striking.

An example ? Neighboring Oakland County, Sterling Heights was incorporated as a town in 1968, a year after the riots, a near-simultaneity that owes nothing to chance. With its 130,000 inhabitants, it can be proud to count among its companies big names in the industry such as DaimlerChrysler, Visteon or General Dynamics. Taking advantage of the Detroit crisis, both economically and demographically, it prides itself on being one of the safest cities in its class.

Belonging to the same county, the city of Troy has 80,000 inhabitants. Like Sterling Heights, it can boast a dynamic economic fabric and a particularly low crime rate. The corollary of this situation: racial exclusion which results in a derisory percentage of blacks (5%).

From there to conclude that the misfortunes of Detroit made the fortune of its periphery, there is only one step which it would be hasty to cross. If it is indisputable, the windfall effect must be put into perspective. Because in the long term it seems that the donut effect turns into ” crepe effect “. The population of Wayne County, to which Detroit and Dearborn belong, has been in free fall since the 1980 census.

The other two counties bordering Wayne do not necessarily have to rub their hands. Since the 1990s, their demographic growth has remained positive but has fallen below the 10% threshold. In Oakland County, the population of Pontiac (nearly 70,000 inhabitants) has even been declining steadily since the 1980s. Worse, this city, which nevertheless hosts the headquarters of Williams International, has come under the control of the State of Michigan. from 2009 to 2013, just before the Detroit bankruptcy. It is now one of the 15 poorest cities in Michigan, along with nine other cities in the suburbs of Detroit.

The descent into hell from the city center does not only make the cities that already are a little poorer. It also affects the most privileged cities. After experiencing double-digit population growth, Sterling Heights is expected to gain only 2% of inhabitants in 2019. Livonia (95,000 inhabitants) or Grosse Pointe Park (11,000 inhabitants), other relatively wealthy towns, have even entered into decline . The situation is in fact almost uniformly bad for the entire Detroit metropolis, regardless of the type of city, poor, rich, large, small, medium. And yet in almost all of these suburban towns, the population is overwhelmingly white (85%).

Rise of the face-to-face economy and minimum public services

The return of companies to Detroit such as the insurer Blue Cross Blue Shield or the vendor of computer equipment HP obscures a major fact: the city’s economy is now dominated by the face-to-face sphere. Of the top six employers are hospitals in Detroit, followed by city hall, a health NGO, public schools and the federal government. In this top 6, there is only one company belonging to the financial sector (very represented in the city): Quicken Loans.

This situation contributes to a drop in tax revenues and, as a consequence, to the decline of municipal services, this decline in turn fueling the decline in the attractiveness of the metropolis. We know how difficult it is to break this vicious circle once it has started.

That like Detroit, Michigan is not in extraordinary economic shape will not surprise anyone. Should this be seen as the consequence of international competition? Not really, or at least not only. Other states also have strong industries: California, Ohio, Illinois, Pennsylvania. While Michigan’s GDP is only 440, Ohio’s is 570, Pennsylvania’s is 660, Illinois is 730, and California’s is 2,500. not give a very different result: California is at 63, Illinois at 57, Pennsylvania at 51, Ohio at 48 and Michigan only at 44. What do these four states have in common? Unlike Michigan, they have a healthy economic capital, be it Los Angeles, Chicago, Philadelphia or even Columbus.

As to make matters worse, Detroit can only count on itself. Nobody wants to pay. Neither the federal state, nor the white and wealthy cities of the periphery. In a difficult economic situation, Detroit protects its political prerogatives and the peripheral cities their resources. A warning for France.

On this side of the Atlantic, the crisis in medium-sized cities presents more or less the same symptoms as Detroit: a downtown area in decline, a central city in decline, the capture of taxable households and businesses by peripheral municipalities … While Detroit suffers from local particularities, the medium-sized French agglomerations will only be able to avoid the same fate by playing together. This is finally the great lesson of Detroit.