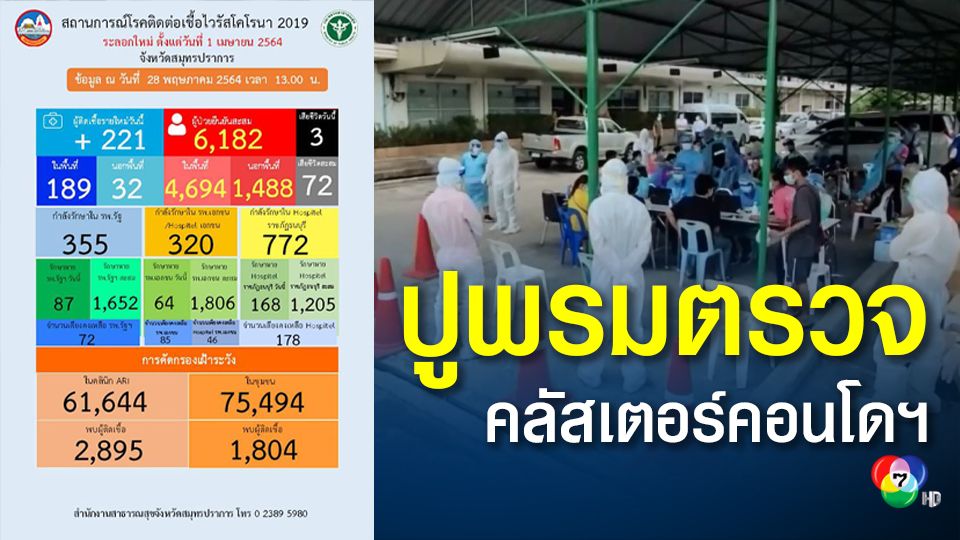 Today (28 May 64), Dr. Apisamai Srirangsan, assistant spokesman, revealed that Prof. has been monitoring the situation of Covid-19 patients in Samut Prakan province. 221 new infections and 3 deaths were found by video conferencing. It has been reported that the outbreak in condominiums The province will expand the results of the proactive search for nearby communities to 9 more buildings. It is estimated that there are at least 8,000 residents. Testing will be completed within 5 days. The province has also ordered the closure of the Samrong market. and Phra Pradaeng Market for 3 days to clean and proactively search

In the Samut Prakan Province Reports of 221 infections were found in the area, 189 were in Muang district, 149 were in Bang Phli, 5 were in Phra Pradaeng, 14 were in Bang Bo, 5 were in Bang Sao Thong, 16 were received for further treatment in the province, and 32 were reported dead. Male, Thai nationality, age 75 years, history of contact with confirmed patients, congenital disease, high cholesterol, high blood pressure address while sick Bang Khun Thian District, Bangkok, the second person is a 64-year-old Thai man with a history of contact with confirmed cases. Address while sick, Praeksa Mai Subdistrict, Mueang Samut Prakan District, and the third person is a 46-year-old Thai man who has traveled to crowded places. and has congenital disease, epilepsy While sick in Bang Phueng Subdistrict, Phra Pradaeng District, Samut Prakan

While Mr. Nutchawan Alphat Techasen, Muang Samut Prakan District Chief with a team of public health officials in Samut Prakan Province Proactively inspected the first set of residential workers in 4 condo buildings of 2,000 people, and most of them worked in the canned sea building factory in Soi 3 C, Bang Pu Industrial Estate.