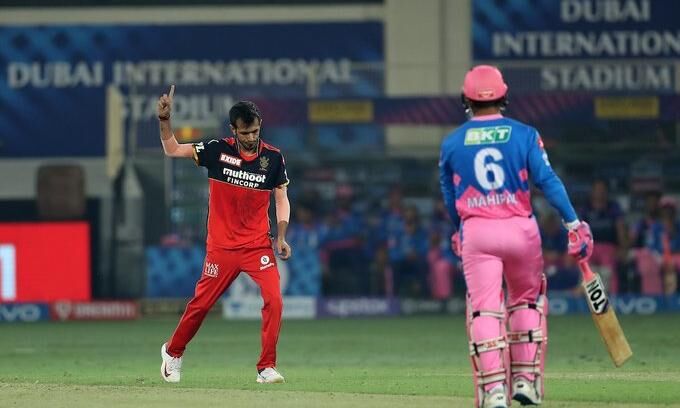 Dubai: Royal Challengers Bangalore and Rajasthan Royals were on fire at the Dubai International Cricket Stadium on Saturday. Despite a good start, the Rajasthan Royals failed to find the back of the net. Batting first, Rajasthan could only manage 149 for nine in the allotted overs. Captain Sanju hit two sixes after Evin Lewis’ shot but was dismissed for 19.

Bangalore captain Virat Kohli won the toss and elected to field. Openers Evin Lewis and Jashaswi Jaiswal gave Rajasthan a good start. The duo put on 77 for the first wicket. In the fourth over, Evin Lewis top-scored with 18 runs, including two sixes and a four, to give Rajasthan the lead. In five overs, the team’s score crossed 50, but with both out, the team’s score dropped rapidly.

Breaking the tie, all-rounder Dan Christian gave Bangalore a decisive turn. Jaiswal, who scored 31 off 22 balls, was caught by Siraj. Jaiswal was replaced by skipper Sanju Samson who gave way to Lewis’ shot. However, Evin Lewis, who scored 58 off 37 balls, did not last long. George Gorton fired the burning player. This is the first time he has scored a half-century for the Rajasthan Royals. Mahipal Lomter (3) was also out later. Captain Sanju’s shot was expected by the fans but the batsman was out for 19 runs. Later, Rajasthan was devastated. Liam Livingstone (6), Rahul Thewatia (2), Ryan Parag (9), Chris Morris (14) and Chetan Zachariah (2) were the other notable contributors. In the end, Rajasthan scored 149 for nine.