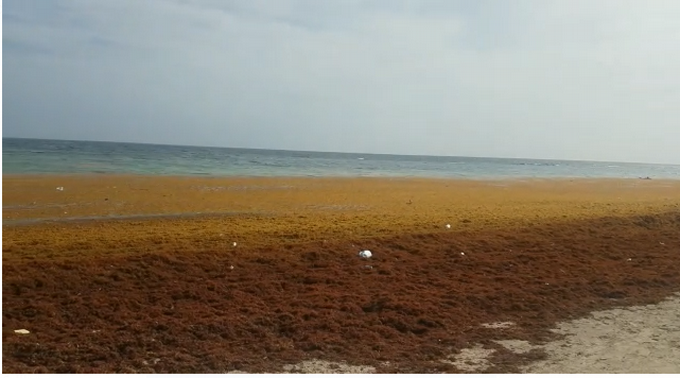 An unprecedented amount of sargassum has invaded this summer part of the paradisiacal beaches of white sand and crystal clear water of the Dominican Republic, in the process of recovery of tourism, the main source of foreign currency in the country.

For weeks now, the algae that originates in the Sargasso Sea, a region of the Atlantic east of the United States, it has been spreading along the coasts of the country, including places where it is not usual.

With rakes in hand, dozens of men work under the inclement Caribbean sun on the beach of Cortecito, in Punta Cana, collecting sargassum, which “has arrived suddenly and in quantities never seen before,” one of the workers told Efe. , of Haitian nationality, who preferred not to identify himself.

A colleague and compatriot of his, who does not give his name either, nods his head and adds: “Today there is nothing compared to what there was at the end of the week”. while pushing a barrow full of sargassum, a task to which he is dedicating eight hours a day and for which he receives 600 pesos (10.7 dollars) from the hotel for which he is working on these cleaning tasks.

And is that the increase has been excessive compared to previous years, according to experts on the subject, although there is no official report on the number of affected beaches in the country.

The phenomenon, which affects Caribbean beaches especially in summer, occurs at a time when tourism is back on the rise in the Dominican Republic after the pandemic.

The country received 2.4 million tourists between January and July, a figure higher than all visitors in 2020, when world tourism stopped due to the coronavirus.

The sargassum “began to come in a very rational, smooth, manageable way, but lately we have had a significant volley of sargassum, which has really hurt us,” the president of the Eastern Hotel Association (Asoleste), Ernesto, told Efe. Veloz, although he clarified that there has been no cancellation of reservations for this.

Of the opposite opinion, Marcelo Vargas, a tour operator in the area and head of the Sargasso Monitoring Group in Bávaro / Punta Cana, said that the situation is already beginning to have consequences, to the point of causing changes in the plans of many tourists.

“In this area it is difficult to take excursions. The client arrives and says: look at the water is dirty, I do not want to do that excursion and cancel it” or, in the best of cases, decide to change the destination, said Vargas, during a tour by the beach of Bibijagua, in Bávaro.

In fact, he said, concern about the issue caused a considerable rise in members of the group he directs, which already exceeds 6,200, most of whom have joined in recent months to exchange opinions on the subject or request information on the state current of the beaches.

Another excursion organizer, who preferred not to identify himself, was even more pessimistic about the immediate future of the internal trips carried out in that area, while criticizing “the little support” of the authorities to resolve this issue.

A SOLUTION FROM THE PUBLIC AND THE PRIVATE

Several hotels in the area already have temporary antisargasse barriers, but according to a hotelier told Efe, some of them broke a few weeks ago with the passage of Storm Grace, throwing large amounts of algae onto the beach.

Hoteliers are waiting for the installation of a fixed barrier, in a project financed equally between the state and the private sector, which will go out to tender in the coming weeks.

This barrier is the result of an agreement signed last November by the Ministry of Tourism and the National Association of Hotels and Restaurants (Asonahores), which involved the creation of a fund of 11.8 million dollars to mitigate and manage sargassum in the next five years.

These resources will be exclusively used for the payment of the service of supply and installation of 31,524 linear meters of barriers or similar solutions on the beaches of the areas of Punta Cana, Bávaro, Cabeza de Toro, Arena Blanca and Uvero Alto, all in the east. the main tourist destination in the country.