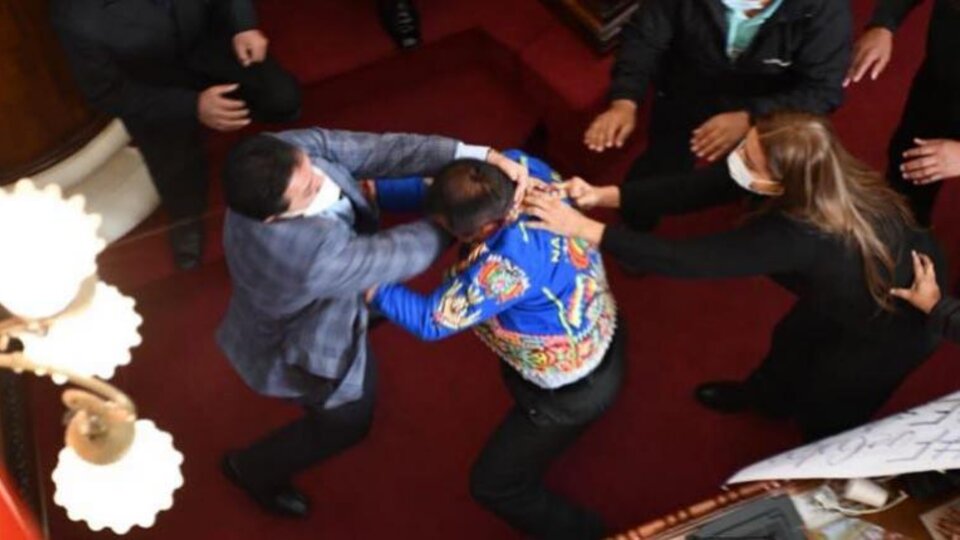 Two Bolivian congressmen exchanged insults, kicks and pineapples during an interpellation to the Minister of Government, Eduardo del Castillo, for the arrest of former de facto president Jeanine Áñez in March. They are Senator Henry Montero, from the right-wing Creemos party, and Deputy Antonio Gabriel Colque from the ruling Movimiento Al Socialismo (MAS). Two other assembly members grabbed each other by the hair. The discussion that polarized opposition and pro-government parliamentarians was whether the political and social crisis that the country went through in 2019 and led to the resignation of former President Evo Morales was the product of electoral fraud or a coup d’état.

The report presented during the session by Minister Eduardo del Castillo was preceded by the presence outside the Assembly of the victims of the massacres of Took out, Free and Pedregal in which more than twenty civilians died as a result of the repression of the security forces when Áñez assumed the interim presidency of the country after the coup against Evo Morales. This protest was symbolized by three cardboard coffins that were posted at the entrance to Parliament.

Inside, the Assembly was filled with banners calling for “justice” for the victims or with questions about “where is the tear gas money?”, in reference to the recent corruption scandal that plagues the de facto government of Áñez. In front of the main lectern there was also a pile of papers with inscriptions of “Actas 2019” and “Actas 2020” with which del Castillo challenged the opponents to demonstrate that there was no electoral fraud in those two years.

In his speech, del Castillo called on the opposition to “commit to vote in a liability trial against Jeanine Áñez and her mafia clan.” In addition, the minister called a “pamphlet” the document of the Organization of American States (OAS) on alleged irregularities in the 2019 elections. “In our country there was no electoral fraud and all the people around her (Áñez) did everything possible to consummate a coup, “said del Castillo.

“Complicit in corruption, drug trafficking and deaths, silence! Keep your composure! The Bolivian people see you”, came to recriminate the young official before the cries of the opponents who interrupted his explanation. Until a fourth intermission was due to dictate by the blows between the parliamentarians Colque and Montero. The deputy of Cree for Santa Cruz, Tatiana Áñez and her counterpart from MAS for El Alto, María Alanoca, also braided.

The act of interpellation continued and lThe majority bank of the MAS offered its support to del Castillo for the actions that led to Áñez’s arrest. The former de facto president has been serving preventive detention since mid-March, accused of sedition, conspiracy and terrorism following a complaint from the former MAS parliamentarian, Lidia Patty.