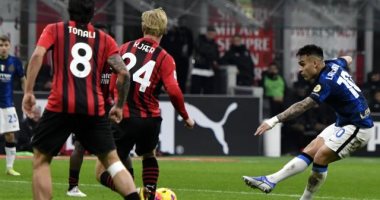 The Italian league title is still confused and on a hot plate, although Inter Milan A big victory over Cagliari, by three goals to one, during the match that brought the two teams together at the Sardinia Arena, Cagliari’s stronghold, in the thirty-seventh round of the Italian League.

The team was Milan Atalanta won 2-0 in the match that brought them together at the “San Siro” in the thirty-seventh round of the Italian League for the current season 2021-2022. The goals of the match were scored by Rafael Liao and Theo Hernandez in the 57th and 75th minutes, respectively.

Inter Milan continues to chase Milan at the top, as it occupies second place with 81 points, while Milan is in the lead with 83 points, and meets with Sampdoria, while Milan plays with Sassuolo on Sunday, 22 May, which are the two confrontations that will be awarded the Italian League champion.

Scenarios of the Italian league champion

We review the scenarios for resolving the Italian League title between Milan and Inter in the last round:

If Milan win and Inter lose, Milan will win the title to top the table with 86 points at that time, and if the two teams lose, the title will also go to Milan.

(Shadow) The Russian army forcibly crossed the river and was attacked head-on! The “devastating blow” of the Ukrainian army has long been waiting there | International | Newtalk News