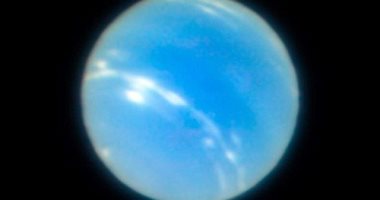 Scientists have finally explained why Uranus and . are differentNeptune Much, although they have a lot in common, and the two distant planets in the Solar System have similar masses, sizes, and atmospheric compositions, Neptune nonetheless appears bluer than its neighbour.

According to RT, the mass of Uranus is about 15 times the mass of the Earth, while the mass of Neptune is 17 times, with almost identical atmospheric compositions of hydrogen (more than 80% each), helium and methane.

The new study, led by Professor Patrick Irwin at Oxford University, suggests the presence of a layer of haze on both planets, which explains the different colors of Uranus and Neptune.

The study suggests that both would appear almost equally blue if there was no fog in the atmosphere, and using observations from the Hubble Space Telescope, the NASA Infrared Telescope Facility and the Gemini North Telescope, an international team of scientists developed a model to describe the layers of aerosols in the atmospheres of both planets. .

Professor Irwin, lead author of the research paper, said: ‘This is the first model that synchronously fits observations of reflected sunlight from ultraviolet to near infrared.

He added, “He is also the first to explain the difference in visible color between Uranus and Neptune”, and the model includes three layers of fog at different altitudes in the atmospheres of the two planets.

Scientists say that the middle layer of fog particles is thicker on Uranus than on Neptune, which affects the visible color of the two planets.

The study showed that embedded in the inner layers of the atmosphere, it consists of more haze than previously thought, rather than just icy clouds of methane and hydrogen sulfide.

The scientists said this is the first time that a study has taken into account wavelengths from ultraviolet to near infrared, rather than focusing on a handful of light waves.

Previously, scientists suggested that Neptune’s methane is what makes this planet so blue, as the gas absorbs a lot of red light and reflects blue colors. But scientists were at a loss to explain what was happening in Uranus, given that it contained more methane (2.3% of the mass of the atmosphere, compared to 1.9% in Neptune).

This discrepancy indicates that something else must be responsible for the color difference. But other major differences between the two planets revealed few clues to the mystery.

In fact, both planets have not been well studied, and each was visited by only one spacecraft, NASA’s Voyager 2 in the 1980s. Since then, scientists have relied on telescopic check-ins to spot these blue celestial objects.

The new study shows that on both planets, methane ice condenses on particles in the middle layer, forming a shower of methane ice that pulls fog particles deeper into the atmosphere.

Neptune has a more active and turbulent atmosphere than Uranus, which indicates that its atmosphere is more efficient in converting gas into a layer of fog where it can condense on the fog particles and produce this ice. This removes more haze and keeps the Neptune haze layer thinner.

Therefore, Neptune appears bluer, while excess haze accumulates on Uranus in the planet’s stagnant and sluggish atmosphere, giving it a lighter hue.

The study also showed a second, deeper layer in the model. And when it darkens, this could be why dark spots appear more occasionally on Neptune and more intermittently on Uranus, like the famous GDS-89 Great Dark Spot on Neptune, spotted by Voyager 2 in 1989.

There are no plates for people with disabilities; taxpayers get angry