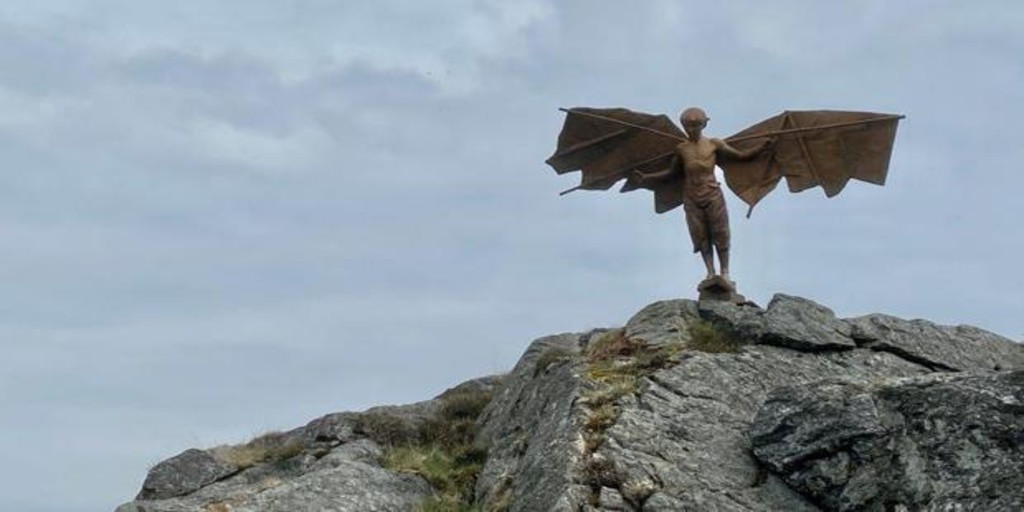 Sculptors Coderch and Malawi have seen their bronze castings soar through the overcast Swedish sky to reach their new home, the sculptural festival ‘Skupltur i Pilane’, one of the most important dates in the art world, which opened its doors to the public on the 15th. The duo made up of the Catalan Joan Coderch and the Basque Javier Malavia has been invited to exhibit their works together with some of the most renowned sculptors. relevant to the international scene such as Tony Cragg or Jaume Plensa.

Icarus, the character that inspires the piece ‘Learning to Fly’, has finally managed to fly into an allegory of Greek myth by being successfully transported to the Swedish festival, a space conceived as an open-air sculptural gallery with more than eight hectares of exhibition space. With their hyper-realistic piece of mythological legend, Coderch and Malavia want to alert of the pressure that the modern world exerts on the new generations to achieve success. A goal that leads them to an excessive ambition like the one that made the Greek character burn and fail in his flight. The account of both artists about Icarus connects perfectly with the prevailing debate on social networks about the false image of perfection and the persecution of virality that is projected in very young audiences, with the psychological consequences that this can cause them. The artists highlight the need to educate these new generations in values ​​such as caring for the environment and sustainability.

Visitors to the ‘Skulptur i Pilane’ will also be able to enjoy until September 26 the ‘Salt Giant’, whose silhouette already borders the North Sea. This reflection on the human resilience capacity in the face of great misfortunes like him Covid-19 It is also located at the foot of the Mediterranean in La Marina de Valencia, the city where sculptors live and work.

Joan Coderch (1959) and Javier Malavia (1970) They started their joint sculpture project just five years ago. In this short time, they have managed to exhibit their works around the world and be considered one of the artistic duos with the greatest projection of the moment with pieces in emblematic galleries and awards such as the First Reina Sofía Prize for Sculpture in 2017. This same year they received second place for their figure ‘Liber’ at the International ARC Salon, one of the most notable art competitions in the United States. They repeat the podium for the second consecutive year, after winning the last edition with ‘The Swan Dance’.