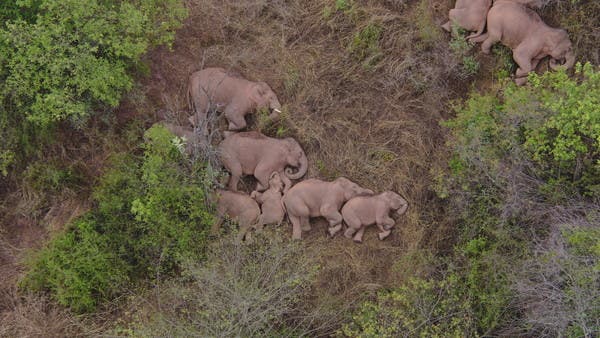 For more than a year, it has been wandering from one place to another in the vast country of China, with more than 14 elephants roaming eating and playing without anyone stopping them.

The herd of elephants stopped in a forest in Yunnan province after passing through Yuxi city today, Friday, after entering and leaving Kunming, the provincial capital, despite attempts to change its course after a journey that covered hundreds of kilometers of forests in the south of the country.

For its part, Chinese official media reported that Villa had left the herd 12 kilometers away in the past few days.

Journey to the North

The herd, which includes three baby elephants, began its journey north more than a year ago, leaving an elephant sanctuary in Xishuangbana, near the border with Myanmar.

It is not yet clear why the herd headed north.

The space available for remaining elephants in China has gradually decreased over the years, as banana, tea or rubber plantations have replaced the tropical forests of Xishuangbana or the land has been used to grow raw materials for traditional Chinese medicine.