She wanted to become the first black woman to preside over the United States. On Tuesday, December 4, the California senator for the Democratic nomination, Kamala Harris, announced that she abandoned the race in the primary because of insufficient financial means.

"I'm not a billionaire"

"My campaign to be elected president simply does not have the means we need to continue (…) I am not a billionaire. I can not finance my own campaignacknowledged the ex-candidate.

If it is not named, the billionaire Michael Bloomberg appears in watermark of the letter announcing to his supporters that it throws in the towel. Former mayor of New York, Michael Bloomberg joined late November the Democratic primary, long months after the main candidates.

A wealthy defender, Democratic Senator Elizabeth Warren, third in the polls (14%), took these words on the fly to reinforce her campaign message: "Kamala is right, our system is deeply failing when billionaires can buy their ticket"she tweeted.

Thank you @KamalaHarris for your commitment to fighting for the people, for justice, and to holding Donald Trump accountable.

Kamala is right-our system is deeply broken when billionaires can buy their way in. I'll fight with you to make sure our government works for all of us. https://t.co/EU0Esl2oBN

While still conducting an intense campaign recently in Iowa, Kamala Harris confessed to having reached the"One of the toughest decisions" of his life " the last days ".

It was in front of an enthusiastic crowd of 20,000 that the former California attorney had lined up at the end of January in the competition to win the Democratic nomination and challenge Republican Donald Trump in the November 2020 presidential election.

But since a remarkable performance in a debate that had propelled her this summer, in the top three polls, the senator aged 55 had fallen back and stagnated far behind. Kamala Harris had indeed been relegated to sixth place (3.4% according to the average RealClearPolitics Institute) by Mr. Bloomberg.

After two terms as a prosecutor in San Francisco, she was twice elected California prosecutor, becoming the first woman, but also the first black person, to head the judicial services of the most populous state in the country. Then in January 2017, she was sworn in the Senate in Washington, registering as only the second black senator in American history. 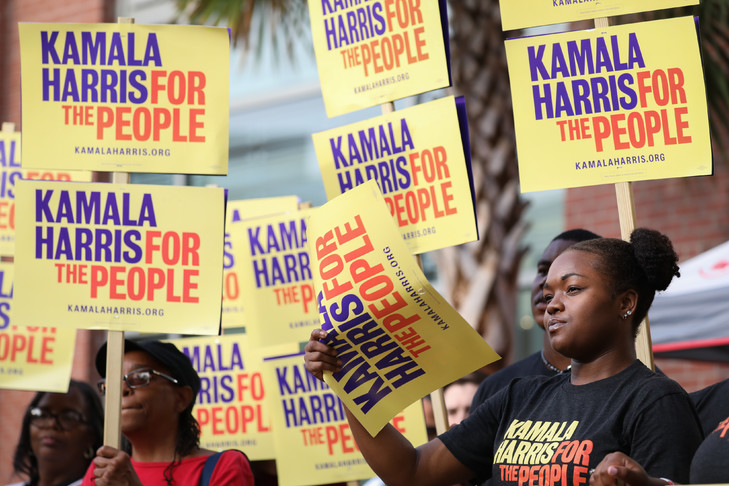 This is one of the biggest personalities to abandon the Democratic primary, which now has 15 candidates in the running.

Still favorite for the primary, former Vice President Joe Biden hailed the"Intellect" and the "Talent" of Kamala Harris, despite their very lively exchange in June during the debate that had taken the senator off the polls.

In front of the cameras, he did not answer the question everyone was asking on Tuesday: would he consider becoming vice-president if he were elected to the White House?

For his part, the moderate candidate Michael Bloomberg welcomed a tweet the departure of Kamala Harris by claiming that she had brought "Ideas and an important perspective" at the primary level. The latter is betting on an unprecedented strategy for this primary: it will not show up in the first states that will vote in February, usually very influential on the rest of the race, but wait for the "Super Tuesday" March 3, when some fifteen states will organize their primaries. In the meantime, he will water these territories with self-financed campaign spots.