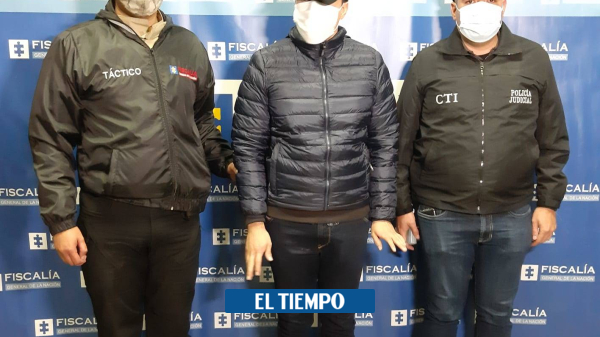 By order of the Supreme Court of Justice, the CTI of the Prosecutor’s Office captured this Tuesday the senator and former governor of Santander, Richard Alfonso Aguilar Villa.

Aguilar is investigated since last March for alleged irregularities in contracts that he signed between 2014 and 2015 when he was leading the department.

The Investigation Chamber opened a formal investigation into Aguilar for the alleged commission of the crimes contract without compliance with legal requirements, undue interest in the conclusion of contracts, aggravated conspiracy to commit a crime and embezzlement by appropriation in favor of themselves and third parties.

(Read also: Controversy over vaccination of the young sister of the governor of Santander)

He abused the power he held and violated the principles of economy, planning, transparency and objective selection

“The ruling was adopted in the development of the investigation for alleged irregularities in several contracts signed between 2014 and 2015, when Aguilar Villa served as governor of the department of Santander. Facts that also involve him with a possible concertation to commit a crime and in which he apparently abused the power he held and violated the principles of economy, planning, transparency and objective selection, as a result of which he would have appropriated – for himself and for others- of public money, “the Supreme Court said in a statement.

The then regional president would have ordered some officials of the Department’s Governor’s Office to favor and deliver those contracts to certain people.

The Court added that, according to the process, “in the conclusion of the legal business in question, the then regional president would have ordered some officials of the Department’s Governor’s Office to favor and deliver those contracts to certain persons or consortia previously indicated by him.” “.

The alleged irregularities have to do with works contracts and supervision for the reinforcement of the Stadium in the Olympic Village of Bucaramanga (2015), improvement works on the San Gil-Charalá highway (2014) and in the Agroforestal and Energy road corridor (2014). ), as well as improvement work on the Bucaramanga – Floridablanca road (2014).

The high court too He certified copies to the Attorney General’s Office so that it may proceed with any criminal actions it deems pertinent, bearing in mind that the investigation involves other possible participants in the acts of corruption investigated.

Aguilar must give his explanations on whether or not there was an address on his part so that the contracts were signed by certain contractors.

The former governor has publicly said that these are false testimonies against him from criminals “who seek to obtain reduced sentences in exchange for incriminating me. The truth will be clarified, justice will shine.”

– Uribe case: this Wednesday will continue request of estoppel

– The criminal structures affected in operations in Sucre and Córdoba