Health authorities in the province of Córdoba filed a criminal complaint against a 24-year-old man named Ignacio Nicolás Martín, who was accused of practicing medicine during the pandemic without ever receiving a medical degree.

The case was uncovered by the UCR councilor Carlos Ordóñez and was discovered by the province’s health directors during the month of December. During the previous two months, Martín had developed in the Río Cuarto Emergency Operations Center and even gave talks to several professionals and citizens about the actions of the emergency center in the fight against the coronavirus in Córdoba.

The young accused had volunteered to join the team of so-called “virus hunters” in Impira, Río Segundo. He had specialized in swab treatments and began work during the pandemic in September. After two months, he assured that he had already registered as a doctor and even showed his superiors a presumed official card that proved it.

Once the COE left Río Cuarto, the false doctor decided to remain in the city: he remained in the coordination of the Tactical Operations Center until mid-December.

It was precisely the authorities of the Ministry of Health of that city who found irregularities in the documentation and in the story of the alleged young doctor and began a secret investigation to try to confirm the registration of his position.

Likewise, the case was brought to light by the UCR councilor Carlos Ordoñez, who assured that his block will demand a report, since the alleged false doctor practiced in a S24 health center, where he would even have treated patients. During the last hours an alleged false recipe of his authorship circulated on the networks. 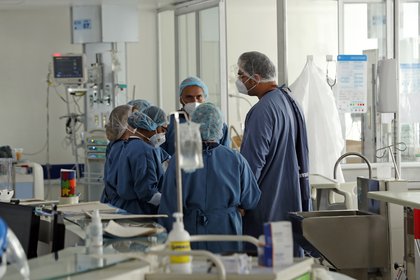 “Today, when we made the complaint to the Deliberative Council, a statement from the Ministry of Health comes out. The news not only impacts Río Cuarto, but also other cities in the south of the province that depend on this COE (…) There we realized that the actions of this supposed false doctor had been many and that he issued opinions that influenced the action of the Regional COE, “Ordóñez told Cadena 3 radio.

“If there was an illegal practice of medicine here, there was also a grotesque error by the officials, because it attended to a critical situation of Covid-19 cases,” he completed.

Likewise, the mayor pointed directly to the Ministry of Health of the province and the Municipality of Río Cuarto.

In addition, Ordóñez complained that the provincial government hid that Martín was discharged in December and that he had not appeared in the institutional orbit for more than a month without anything happening.

The Córdoba Medical Council thus presented the criminal complaint against the alleged false doctor for the illegal exercise of his profession. In addition, the Ministry of Health of Córdoba itself also presented its own complaint: it is in charge of the provincial Health Secretary, Pablo Carvajal, in the District 3 Turn 2 prosecutor’s office in the city of Córdoba.

“It was a very painful and surprising situation for the whole team, we immediately made ourselves available to the Medical Council and we are waiting for the Justice to investigate. Nobody could believe what was happening, he joined as a volunteer and later came with a doctor’s card, with a stamp and everything, he must have presented us with apocryphal documentation ”, said the representative of the central COE of Córdoba.