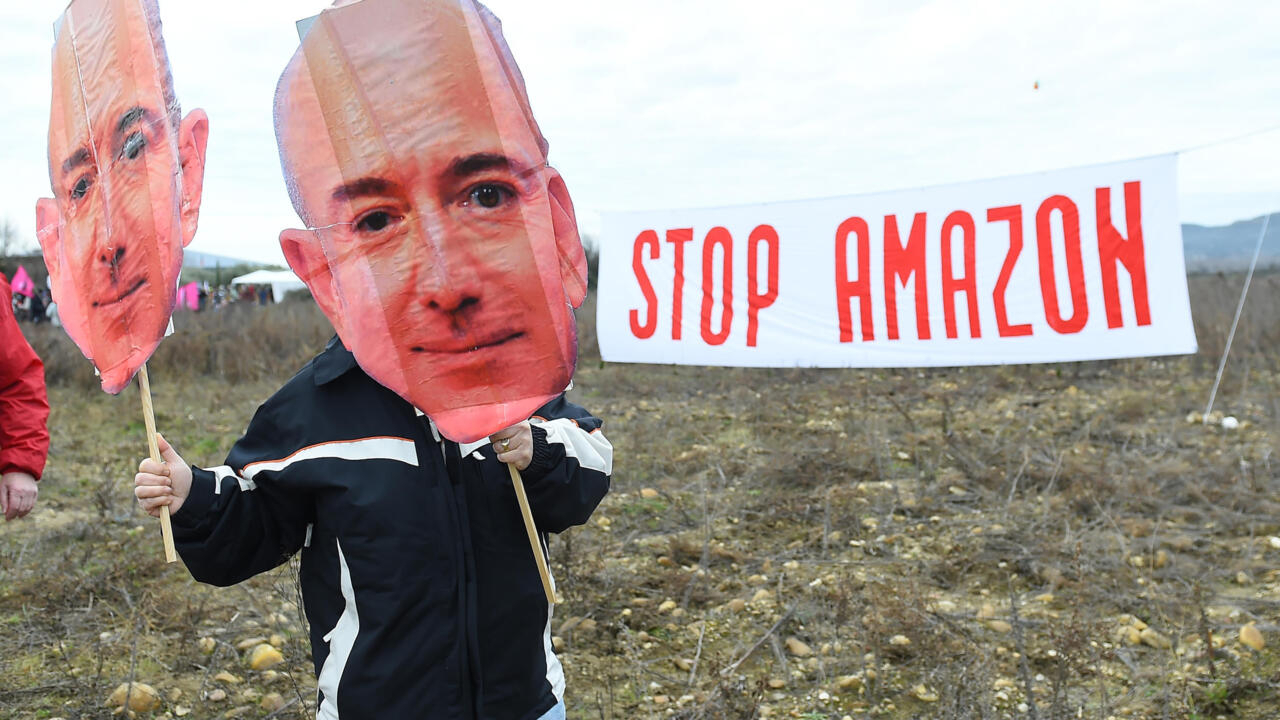 Several hundred activists gathered on Saturday in several cities in France to protest against Amazon, especially near the Pont du Gard, where the American mail-order giant plans to install a 38,000 m² warehouse.

“Stop Amazon” could be read in several cities in France. Several hundred people mobilized Saturday, January 30 in many French cities to protest against the American giant of online sales and its plans for new warehouses, near the Pont du Gard, in the Haut-Rhin or in the Pyrénées-Atlantiques. .

At the call of associations fighting against this project located in the town of Fournès (Gard), near the world heritage jewel, some 800 people, according to the gendarmes (1,400 according to the organizers) came to plant Saturday morning shrubs in front of two large banners proclaiming “Stop Amazon”, “Neither here, nor elsewhere”.

They also formed a human chain to show the influence of the planned project along the A9 motorway over 14 hectares. Multicolored balloons floating at 18 meters showed its height, equivalent to a five-story building.

“It’s been two years that citizens of Fournès and the surrounding area have been fighting against the establishment of a huge Amazon warehouse. At the beginning, they were a bit alone against everyone, but managed to put the brakes on the project thanks to legal recourse. “still in progress, explained to AFP Raphaël Pradeau, national spokesperson for Attac.

“We want to show that these are not small isolated struggles and that we can mobilize hundreds of people who are ready to return to the site to prevent work,” he added, announcing a new mobilization on the 29th. may.

A little further on, Sarah Latour, 38, came with her two sons aged 8 and 6. They are happily busying themselves with planting a fragile strawberry tree on the wasteland on which vines had previously grown since they had been uprooted.

“These shrubs that we are planting today are a symbol of life in relation to the concreteization that Amazon practices”, explains the mother of the Ardèche family who “does not want this harmful model” for her children.

About 200 people in the suburbs of Nantes

About 200 people also participated Saturday morning in a rally in Carquefou, in the suburbs of Nantes, in front of an Amazon logistics warehouse, according to the organizers.

“We denounce the fact that Amazon is destroying more jobs than it creates and that these are precarious jobs that make people sick, especially in terms of musculoskeletal disorders,” he told the AFP Sophie Jallier, spokesperson for the collective for this event.

In Ensisheim, in the Haut-Rhin, a demonstration also brought together a hundred people against the establishment of a giant warehouse on a plot of more than 15 hectares of former agricultural land. “Amazon, Vampire Fiscal”, “Stop Amazon”, “No mega warehouse, neither here nor elsewhere,” proclaimed the banners.

“Today we denounce an economic system that is running out of steam and is wearing out the planet. It forces us to change our ways of living and to think about more resilient operations”, declared Isabelle Schaeffer, member of the Urgence Network association. Climate and Social and South Alsace (Rucssa).

In Augny, in Moselle, around fifty people gathered on a roundabout in front of the site of the former Frescaty air base which is to host an Amazon site.

“There is still time to oppose it”

“We believe that there is still time to oppose it and to consider a reconversion of the site”, commented Charlotte Leduc, activist Attac Moselle, speaking of a project “already started”.

About fifty opponents of the installation of an Amazon platform in Rivesaltes (Pyrénées-Orientales) also gathered in the rain, in front of the town hall of Perpignan-Méditerranée.

For Eric Barbier, from Alternatiba Pyrénées-Orientales, Amazon practices “unfair competition with regard to businesses that pay their taxes in France”. Moreover, he denounces, “most of the workers are on precarious contracts, hired during peak periods, such as Black Friday or Christmas and are then thrown out”.