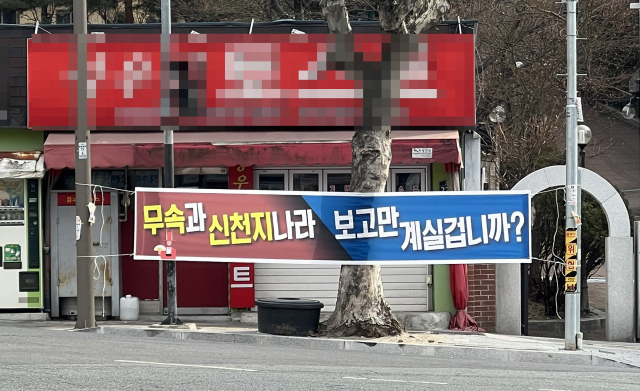 Illegal banners denouncing presidential candidates were installed in downtown Daegu, and the district office in charge of the district began to dismantle them.

On the 28th, a placard was installed on a roadside in Sincheon-dong, Dong-gu, saying, ‘Are you only going to see shamanism and the country of Shincheonji?’. According to the Dong-gu Office, banners that are considered advertisements must be installed with official permission from the ward office. In addition, illegal banners without a stand will be removed immediately.

An official from the Daegu Metropolitan Election Commission said, “It seems that there is nothing in the text on the banner that can infer the name of a candidate for a specific party.

Meanwhile, cases of slandering certain candidates before the presidential election are found all over the region. The Daegu Police Agency is investigating and arresting Mr. A for violating the Public Official Election Act, who posted a print that could have a negative impact on a candidate’s election.

According to the police, Mr. A has attached a number of printed materials, such as ‘Give a vote to ○○○ who asks to apologize for state-run Nongdan when there is a chance’.

The police said, “The Daegu Metropolitan Election Commission caught up with Mr. A, who was trying to put a print, and requested an investigation.”

New York to abolish masks in schools on March 2

talks between Russian and Ukrainian delegations in Belarus on Monday