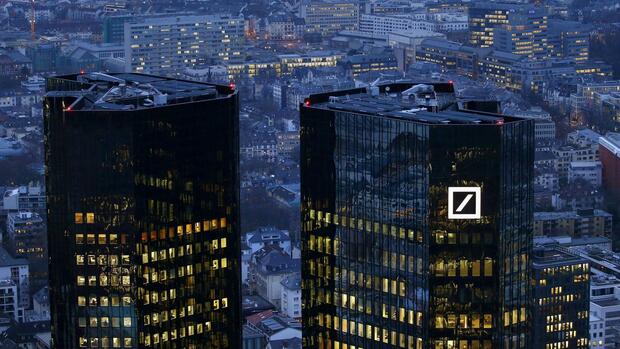 Frankfurt With its shareholders, the Deutsche Bank usually a difficult situation. Because while the institute has been giving shareholders at best mini-dividends for years, it regularly pays out bonuses in the billions above all to its investment bankers. All the more remarkable is the unanimous praise that Deutsche Bank receives for its planned annual general meeting on May 27th.

Because the bank wants to make the purely virtual shareholders’ meeting more interactive than any other German stock corporation to date: This time, investors should be able to speak live in picture and sound during the general meeting, as can be seen from the invitation to the general meeting. In addition, shareholders should be able to ask “to a limited extent” questions about the questions they submitted in advance.

In doing so, Deutsche Bank goes beyond what it is required to do by law. “The exchange with our shareholders is of the utmost importance to us,” said supervisory board chairman Paul Achleitner.

“Deutsche Bank is clearly accommodating its shareholders, which is very much to be welcomed. It takes on a pioneering role and thus refutes the defensive arguments of other companies, ”said Ingo Speich, Head of Sustainability and Corporate Governance at Deka, the Handelsblatt.

“The move by Deutsche Bank is to be welcomed,” said the management board of the Union Investment fund company, Jens Wilhelm.

Investors’ legal right to ask questions has been improved

Because of the corona pandemic, the usual shareholder meetings are hardly possible for the second time. The legislature therefore made online events possible last year, but from the perspective of investors granted shareholders few rights. In the meantime, investors’ legal rights to ask questions have been improved, but no right to live performances or queries has been anchored.

“It is important to be able to ask questions that arise from the contributions of the board of directors and the supervisory board or from other shareholders,” emphasizes Klaus Nieding, Vice President of the German Association for the Protection of Securities Holdings (DSW). “Few companies go as far as Deutsche Bank. It is clearly a pioneer and standard-setter, ”says Nieding.

Markus Kienle, board member of the Schutzgemeinschaft der Kapitalanleger (SdK), welcomed the fact that “Deutsche Bank is proactively developing the shareholders’ rights of the virtual AGM and is not waiting for impulses from politics and legislation”.

Last year, Deutsche Bank tried to give its shareholders more options. Among other things, the institute had therefore already published the speeches by the chairman of the supervisory board Paul Achleitner and the chairman of the board Christian Sewing in advance.

Speeches should be distributed by lottery

However, investors are still not completely happy. “A replacement for a full general meeting with all shareholder rights is also not given,” says Deka manager Speich. Others share the same view. One of the reasons for this is that the inquiries per shareholder are limited to two inquiries. In addition, the opportunities for investors to appear in the interactive version of Deutsche Bank will be more limited than at a general meeting on site.

The money house plans a total of only one hour for this. If the interest is too great, a lottery should be used to decide: If more than 20 shareholders want to speak, Deutsche Bank fund companies and shareholder associations, which represent a share portfolio of nominally more than one million euros, allocate five contributions. The remaining speaking places will be drawn from among all other interested parties. If more than five major shareholders report, the lot will also be decided there.

See Also:  In these cities, prices are rising the most

For many this is a downer. “As a fund company, we naturally want to exercise our right to speak, but the right to speak by lottery cannot be a model for future general meetings,” emphasizes Union Investment Board Member Wilhelm. For SdK board member Kienle, the move by Deutsche Bank therefore represents “the beginning, not the end of a development towards granting full shareholder rights”.

What is undisputed, however, is that more is possible at Deutsche Bank than in many other cases. At Commerzbank, for example, which will hold its Annual General Meeting on May 18, it should be possible this year to ask questions about your own questions. But the investors are not planning to make live appearances, according to the invitation to the Annual General Meeting.

Investors can only prepare written statements or video messages in advance, which can be posted on the investor portal and broadcast at the annual general meeting.

Shareholders will at least be able to refer to the speech of the new CEO Manfred Knof in their statements. Because this year Commerzbank also wants to publish the speech of its CEO in advance – namely on May 12th. “The dialogue with our owners is very important to us,” says Knof.

With these extras that go beyond the legal minimum, Commerzbank can describe itself as progressive, but not as a pioneer.

“The kind of statements and inquiries like those at Commerzbank are more common,” explains SdK representative Kienle. Inquiries transmitted electronically, for example, also have public companies such as the pharmaceutical company Bayer or the consumer goods manufacturer Henkel authorized. “As far as we know, only Deutsche Bank has attempted to actually interact with statements so far,” says Kienle.

More: That will change in 2021 with virtual general meetings