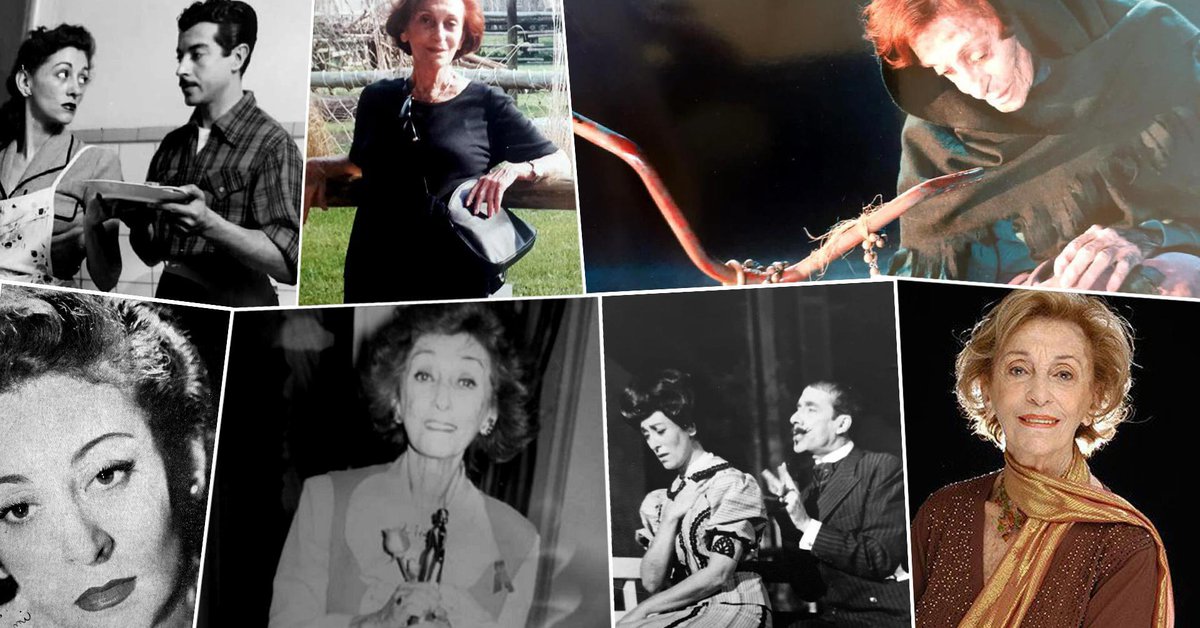 It was born the same year as the Argentine radio. Her mother gave birth to her October 29, 1920 in Desired Port, Santa Cruz, two thousand kilometers from Buenos Aires, where at that time the Obelisk did not yet exist and there was only one subway line.

The daughter of an Austrian mother and an English father, she is named after French theater and film star Sarah Bernhardt. Her parents baptized her as Hilda Sarah Bernard and later, when she would begin her acting career, she would leave the middle name only on her ID.

In his 73-year career, radio plays predominate (he did more than a thousand!), Stage plays, films and 50 soap operas in which he participated. She was the most beloved villain on television and among her characters stands out that of the evil one of Chiquititas, where Agustina Cherri -in the skin of Milli- and others chufas they sang to him “And for being such a witch and bad you wrinkle more than anyone.”

Firm to her convictions and sure of herself, when she was 17 years old, she stood in front of her parents and told them that she would drop out of school and start studying at the National Conservatory of Dramatic Art. She made her acting debut in 1941 and was in the Cervantes National Theater, where she played an empanada saleswoman in the play Martin Fierro.

The following year, in 1942, he met the world of radio theater, where she shone for 16 years, when television still did not exist and the actress could not show her gifts on the small screen. He started on Radio El Mundo, where he worked alongside actors such as Oscar Casco, Eduardo Rudy and Fernando Siro. His career continued on Radio Splendid, he made productions of Nené Cascallar and decided to return to Radio El Mundo, where he starred I don’t want to live like this Y Someone to love. 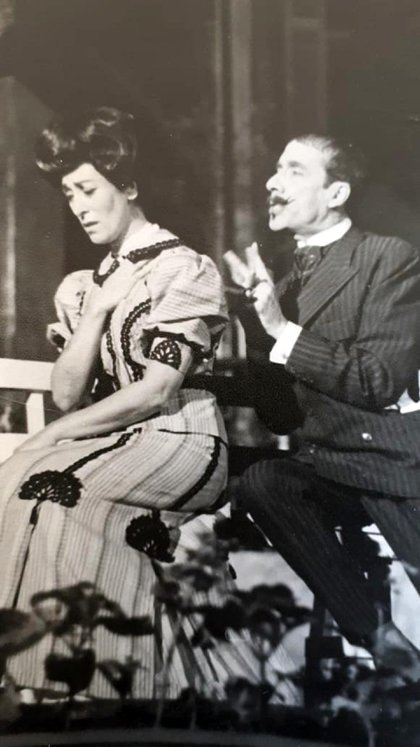 In his extensive curriculum he has countless radio plays, soap operas and plays 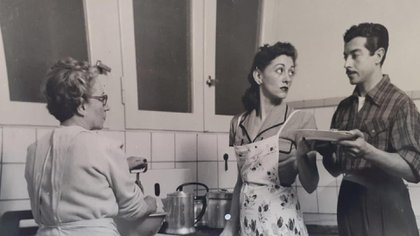 Hilda made her acting debut at age 21

In that station she met her first husband, the president of the Argentine Association of Broadcasters Horacio Zelada. With that story also came the first love disappointment. “I was eight months pregnant and I found out that he was cheating on me. I left it”Hilda later recounted, who had to raise her daughter alone. Then he went back to gambling on love and fell in love again.

That time, from the producer, author and director Jorge Goncalvez, who died in 1983: “Both times I fell madly in love -he affirmed- The first time I saw the first one, I told my mother ‘I’m going to marry him’. The second I met him while pregnant, I treated him later and it was a great love that lasted only 25 years“Recalled who is the mother of Patricia, who had a relationship with Emilio Disi and from that love was born Emiliano. 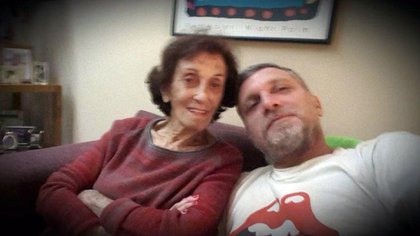 A selfie of a grandmother and grandson: Hilda with Emiliano Parada, who is a television producer 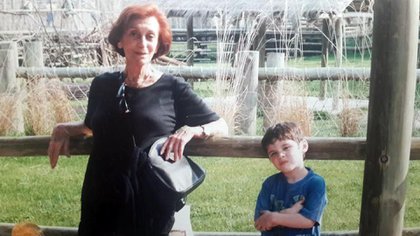 Hilda, with her great-grandson, Lautaro, who is now an actor

A decade after debuting as an actress, her first film role came: it was the baddie of Don Napy, in the film Bad people. One of his first successes on television was to bring to the small screen Those who say they love each other radio soap opera in which he starred alongside Fernando Siro, written by the great Alberto Migrated.

Later he headed and was part of infinite fictions: Love has the face of a woman, Rosa … from afar, The strange lady, You will reap your sowing, Celeste, Floricienta, The successful Pells and Malparida, among many others. 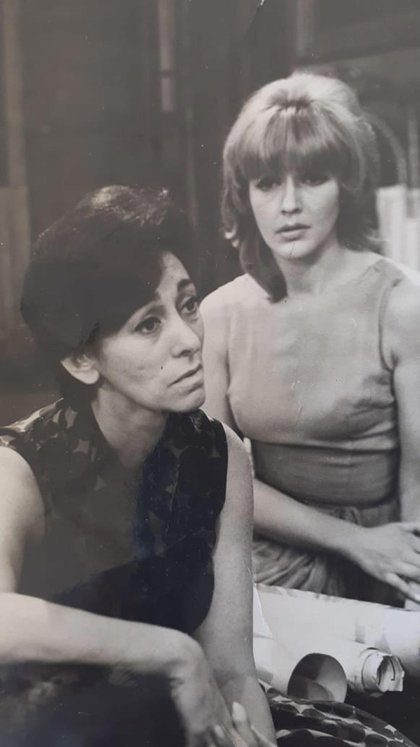 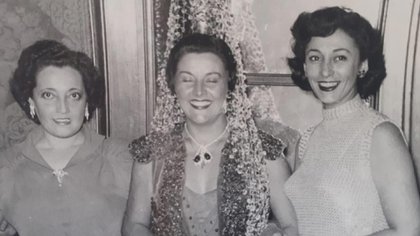 In her extensive career, Hilda Bernard shared a cast with the best actresses

She was one of the most beloved villains in history, the grandmother of a generation. “I’m going to have to keep playing old. I have been the mother of all the television gallants who today are almost 60 years old ″he said a while ago in an interview. With more than seven decades of career, the actress said that she made more than a thousand radio plays, 50 television programs, more than 20 films and as many plays. 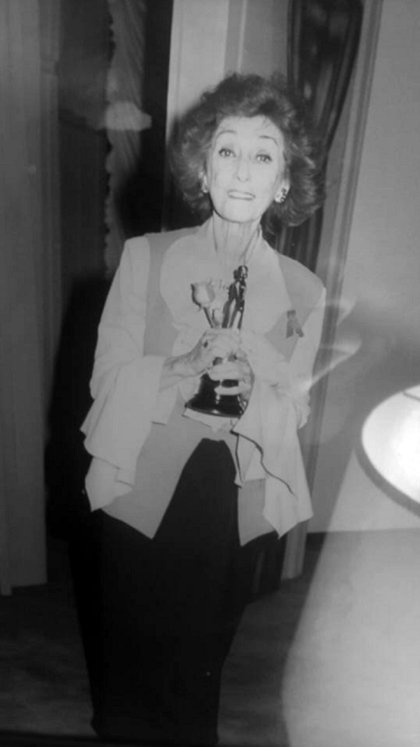 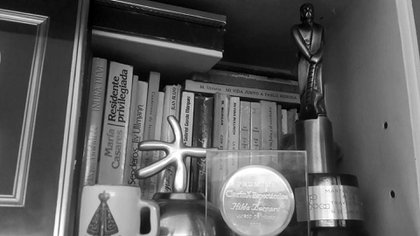 The shelf in his library, with some of the awards he won throughout his career

In 2014, life put her to the test: she suffered a ACV, from which she managed to get ahead, but had to face some consequences that forced her to retire from acting sooner than she had expected. The following year, the Argentine Association of Television and Radio Journalists gave a Martín Fierro to the Trajectory and the actress moved with the speech she gave on stage when she approached to receive the statuette.

“Thank you APTRA for this generous gesture. I really needed these caresses right now. I had proposed to work until I was 100 years old, I am not so short, I have only five to go, but this stroke fell that hurt my throat, my vocal cords got smaller and it hurt my legs “, Hilda explained in front of the great Argentine television and radio artists who listened to her standing over the auditorium.

“Anyway,” he continued, “I think that 73 years of work have been a fortune for me. I did radio, film, theater and television and I was very happy in my career and I hope that God and the doctors who treat me help me to get ahead because I want to and I am going to propose to be working on a stage again”.

Later, he stretched the gap from working until he was 104 on one condition: that his voice be returned to him. “I am a happy woman, I cannot complain about anything. I live with what I have and I live well ”.

Accustomed to being always surrounded by love, Hilda joked about the villainous roles that she had to play in her career. More than once she said that she would not like to be remembered for any particular role but for all the ones she did.

Less than 20 days ago, Hilda overcame a new obstacle in the face of a pandemic that has the entire world on edge: contracted coronavirus in the center where she spends her days and managed to defeat him as a warrior who achieves everything she sets out to do. 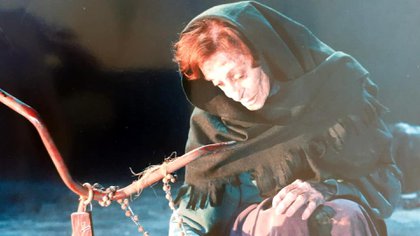 Hilda Bernard has a 73-year career and worked until her health allowed it (Photos: Family Album)

On some occasion, and reserved when talking about her private life, she argued that you have to save your sufferings and “smile for the outside.” “She is a beautiful, divine woman, very human, enthusiastic and in love with her profession. Always with his family life and very dear people around him, ”he told Teleshow director Jose Maria Muscari, who worked with the actress in various plays. “It is a piece of our history and entertainment culture,” he considered.

Patricia’s mother, Emiliano’s grandmother, Lautaro’s great-grandmother, Hilda turns 100 this October 29 and celebrates it with her loved ones, her most intimate family, those who were and are accompanying her at all times.

She is 27 years old and has a love story from a movie: Emily’s Argentine actress in Paris

The single-parent family of Germán Martitegui, the most demanding jury of Masterchef Celebrity: “First I am a father and then everything else”

Muni Seligmann is expecting her first child: “A year ago I changed my diet to Chinese medicine to prepare my body for pregnancy”

El Chino Darín and Cande Vetrano told Teleshow what ACTA is and how it works, the new entity of young actors