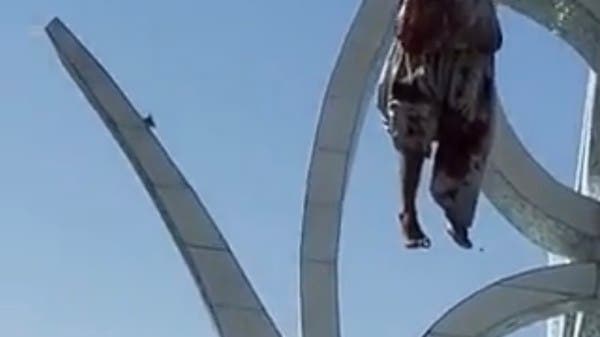 Shocking video clips spread today, Saturday, of the body of a man hanging on a crane in a main square in the western Afghan city of Herat, after the Taliban executed him.

Wazir Ahmed Seddiqi, who runs a pharmacy on the side of the square, told the Associated Press that four bodies were brought to the square, and three bodies were taken to other squares in the city for display.

He added that the Taliban announced in the square that the four had been arrested while they were participating in a kidnapping and that the police had killed them.

A local government official said on Saturday that Taliban authorities in the western Afghan city of Herat had killed four alleged kidnappers and hung their bodies in public to deter others. Sher Ahmad Ammar, the deputy governor of Herat, said the men had kidnapped a local businessman and his son and were planning to drive them out of the city when they were seen by patrols setting up checkpoints around the city.

An exchange of fire ensued in which the four were killed and a Taliban soldier was wounded. “Their bodies were taken to the main square and hung in the city to serve as an example to the other kidnappers,” he said. He added that the kidnapped were released unharmed.

was Mullah Noureddine al-TurabiOne of the founders of the Taliban and the main implementer of its strict interpretation of Islamic law when the movement last ruled Afghanistan, told The Associated Press this week that the militant movement will again carry out executions and amputations, albeit not in public.

Since the Taliban overran Kabul on August 15 and took control of the country, Afghans and the world have been watching to see if the movement will re-establish a tradition of its harsh rule in the late 1990s.

The movement’s leaders are still seen globally as very conservative and hard-line, even if they embrace technological changes, such as the use of videos and cell phones.