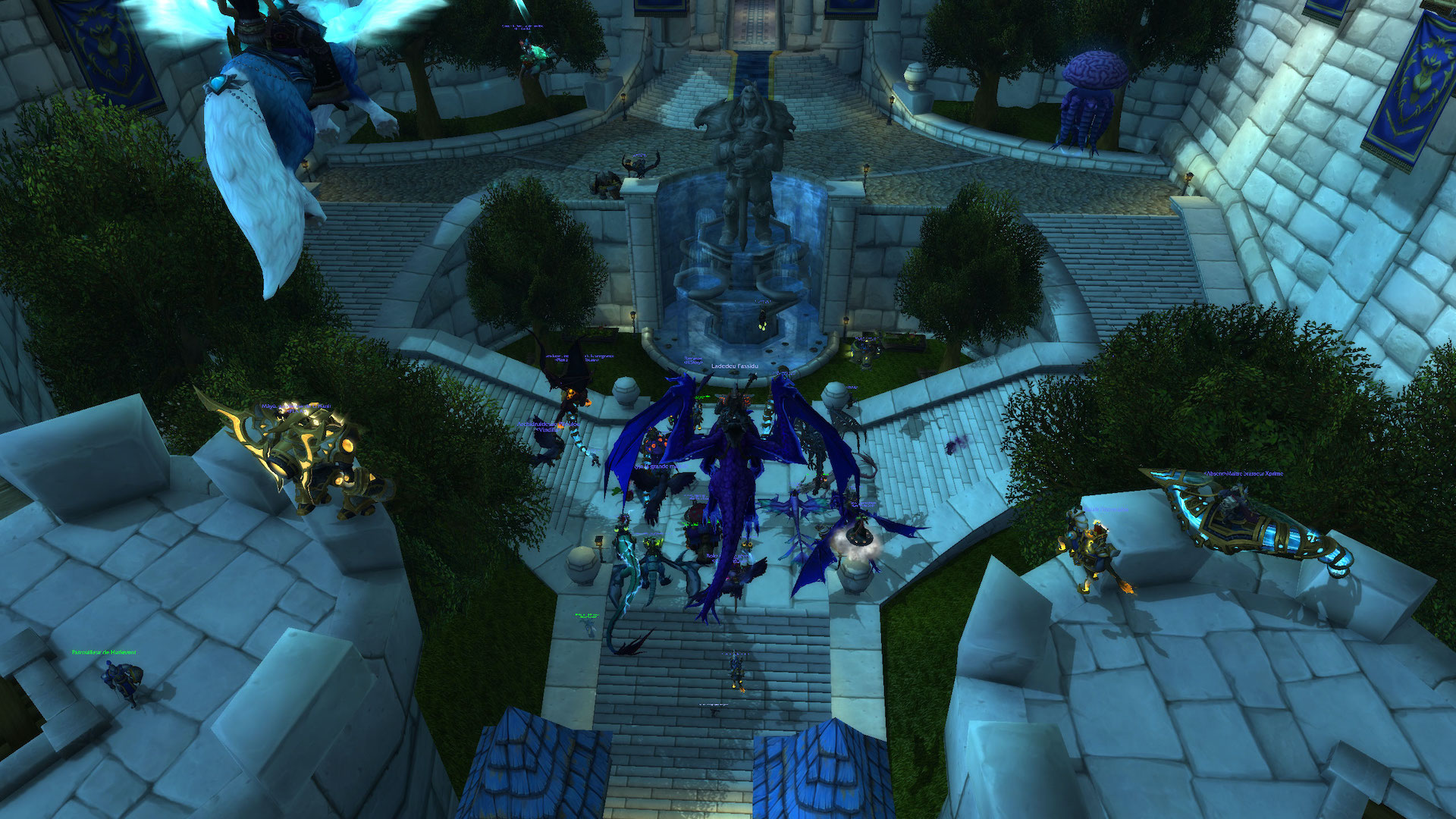 We were there at midnight on Tuesday, November 24 for the launch of the 8th expansion for World of Warcraft, Shadowlands. We expected epic, effervescence, and surely lag. Here is the course of our evening.

The launch of an extension of World Of Warcraft, it’s always a special moment. It’s the start of a month with more than ten hours of play per day for professional players. It is the discovery of a new continent, a new sound universe, a touch of novelty after 16 years of World of Warcraft.

If the “massively multiplayer” aspect of the most famous MMORPG has to appear at one point, this is it. And besides, thousands of players take time off so as not to miss the event.

On the occasion of the launch of the 8th expansion of the game, ShadowlandsOn November 24 at midnight, Numerama had dispatched not one, not two, but three journalists to Azeroth. Just for you, readers

First login, we don’t want to risk our place on the game servers. Following the last major update before Shadowlands, which rolled out in October, we were barely able to log into the game two nights in a row. Worse, even the Battle Net service, which includes all Blizzard games, had jumped. So this time we are taking the lead.

To our surprise, not only does the game run smoothly with no lag, we also don’t have to go through a waitlist to log in. A veteran player from our guild whispers: ” It’s been a few expansions now that Blizzard is properly handling the first night ».

We’re trying to figure out where the quest to take us to Shadowlands will start. For the previous expansion, Battle For Azeroth, the departure was from the faction capital. But for the past three weeks, we’ve been battling the Scourge troops (skeletons, abominations and other ghouls) in Icecrown, an area of ​​WoW’s third expansion, in Northrend. Without anyone giving us a clear answer, we understand that it is in Stormwind, the Alliance capital, that this will happen.

On the chat channel, the atmosphere is more of a joke. Those who are looking for where the expansion will start fail to get a serious answer. ” I have the quest, just log out and log back in », Lies a joker. From our side, we plug in the Twitch channel of Zerator, a famous French streamer who has built a guild project with other videographers, in order to be among the first to tackle high-level content. He seems to be heading towards the square below the dungeon. We also go there.

The small square begins to swarm with people. If you are not familiar with the game, or have not played for a long time, World Of Warcraft now offers 11 playable races per faction (Gnome, Dwarf, Night Elf…), and 12 classes (Warrior, Mage, Monk…). Result: there is a real diversity of combinations. And that’s not all: every player around us has released their finest – or rarest – mount, among the over 400 in-game.

We are therefore witnessing a real festival of colors around the small fountain, on the ground as in the air. Surprisingly, players are rather quiet on in-game written chat. Like us, they are probably on Discord or another voice server with their fellow adventurers.

Despite the crowds, the fluidity of the game does not slow down a bit. Near the fountain, an invisible area on the ground causes players to fall from their mounts: the quest will surely begin here. For a few years now, Blizzard has been putting on mount protection, so that players can interact with the element (a portal, a non-player character…) correctly. He thus prevents rascals from taking out their most imposing Yach or Mammoth to block access.

Midnight strikes at Stormwind Cathedral. A quest appears in our journal, while a non-player character (NPC) appears to open a portal. It’s the long-awaited starting signal!

We accept the quest and rush through the portal, which leads us to Icecrown. On its last three extensions, Blizzard scripts the arrival on the new continent or world. Shadowlands is no exception to the rule. We follow a linear, but particularly epic, storyline with many lines of dialogue and the participation of important characters from the universe.

This system has two advantages. On the one hand, it allows to raise the big stakes of the extension, and to allow the players to take part in missions in small groups with the heroes of the game. On the other hand, it allows to “zone the players”. », That is to say to distribute the flow of characters in several small instances, which makes it possible to avoid an overload and therefore lags and other disconnections. Following the introductory scenario, this zoning disappears, and a more classic quest system appears.

After a little over half an hour, we arrive at the capital of the Shadowlands, Oribos. These first steps on the expansion were pleasant: the game has improved further in terms of graphics, the architecture of the place is new on World Of Warcraft, and we’ve already met the Jailer, the big bad of the expansion.

There remains one question, which reflects a disappointment: where are the players? Where’s the tide of characters that make quests almost infeasible? We have vivid memories of our first steps in Northrend, of the map teeming with priests, thieves and hunters; endless quests, because too many people were trying to do them; lags due to the population being too high. Somehow, we can regret, in a nostalgic way, the non-optimal management of the beginnings of an extension. It is this same nostalgia, that of the “massively multiplayer” side of World of Warcraft which prompted some players to return to la version Classic. Even if it means losing years of technical optimization.

With Shadowlands, Blizzard successfully launched a game in 2020: smooth, flawless. But we almost regret the galleys of yesteryear, even if they would surely have made us growl.

The continuation in video