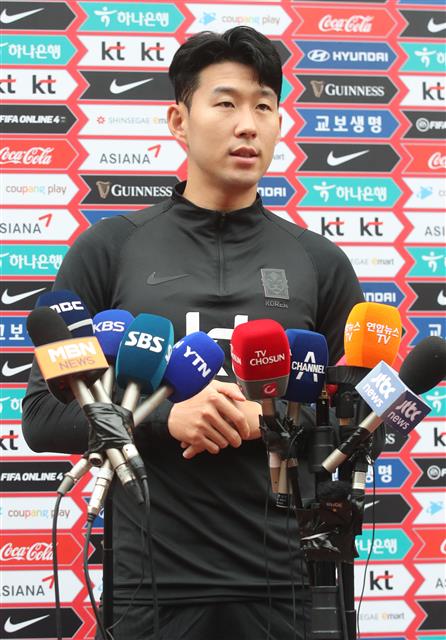 Preparation for the ‘World Cup 4 matches in a row’

“Focus on scoring multiple goals by penetrating the opponent
We will make the perfect team rather than winning right now.”
The highest grade of the Order of Sports, ‘Blue Dragon’ honor
Son Heung-min is the first Korean soccer player

Bento: “The winger needs to defend against Brazil”

Son Heung-min (Tottenham), who became the top scorer in the English Premier League (EPL) in the 2021-22 season, is determined to “make a perfect team by looking at the World Cup finals rather than the immediate results” ahead of four evaluation matches next month to be held in preparation for the 2022 World Cup in Qatar. said.

Son Heung-min said in an interview ahead of public training at the Paju National Football Team Training Center (NFC) in Gyeonggi Province on the 30th, “I will do my best to score more goals by playing well with a detailed and promised play.”

The Korean men’s soccer team, led by coach Paulo Bento, will play Brazil on the 2nd of next month, Chile on the 6th, Paraguay on the 10th, and Egypt on the 14th. Although the opposing team is different, it is a kind of mock exam scheduled similar to the World Cup finals.

Son Heung-min said, “I was ranked as the top scorer in my team, not for the national team,” he said. He also said, “It’s been 10 years since I started playing for the national team, but it’s the first time I’ve played an A match four times in June. I want to show you,” he said. Regarding the match against Brazil’s world star Neymar (Paris Saint-Germain), he said, “There are many stars in Brazil other than Neymar, while me and our national team want to be like that, so we have to work hard.”

Bento also said, “Everyone will do their best to win, but the opponent is the best team in the world. It will be a difficult game and a challenge for us.” He continued, “Unlike the matches in which our team overwhelms the opponent in the past, we will spend more time in the midfield and defense,” he said. . He has to attack as well, but I will order that he needs more of a defensive role.”

On the other hand, Son Heung-min was honored with the highest rank among the medals of athletics, the Blue Dragon. He is the first national football player. An official from the presidential office said on the same day, “The decision was made at the first cabinet meeting at the government complex in Sejong on the 26th.” It is usually awarded by the Minister of Culture, Sports and Tourism instead, but it is known that President Yoon Seok-yeol has set a policy of delivering the Blue Dragon Soap directly this time. Previously, in the soccer field, coach Guus Hiddink received the Blue Dragon Chief, and the members of the 2002 Korea-Japan World Cup semi-finals he led were awarded the Great Leader (2nd grade). Former national team coach Cha Bum-geun was awarded the White Horse (4th grade) and Kirin (5th grade) grades in the 1970s.