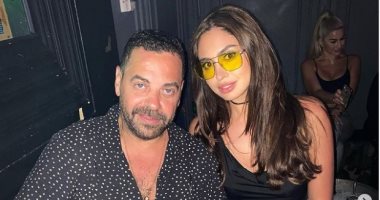 Confirmed close to the director Tariq Al-Arian His marriage to Nicole Saafan, of Syrian origin, who has Australian citizenship, and who has been residing in Egypt with her husband, Tariq Al-Arian, for more than a year, specifically after his separation from the artist, Asala, the mother of his children, “Adam and Ali”.

Those close to Tariq Al-Arian explained that the pictures that the director Tariq Al-Arian and Nicole Saafan collected, in more than one place, are pictures from the honeymoon that the duo spent in a number of countries around the world, and they are not, as was rumored, that the pictures were collected while the star Asala was on his account, to end This marriage is a controversy over the fact that Tariq and Nicole’s relationship was not serious and without marriage, which is confirmed by the case of spinning that brought them together through their accounts on social networking sites.

And “The Seventh Day” learned that Nicole Saafan is currently living in Egypt with her husband, Tariq Al-Arian, which denies the allegations of some that Nicole and Tariq are in an illegitimate relationship, which was reflected in a number of words of love and flirtation between the spouses on their own accounts, where the director Tariq Al-Arian flirted with his wife Nicole Saafan from During his account with Instagram, where he published a picture of her and wrote on it “You are the luck”, which is the famous Amr Diab song, and Nicole Saafan also published on her account, a video clip that she collected with her husband, director Tariq Al-Arian, in their first public appearance.

Nicole appears, in the video that she posted on the Astori feature on her account on the “Instagram” website, accompanied by her husband, Tariq Al-Arian, in a car, exchanging pleasant looks and smiles in a romantic atmosphere, which constitutes an advertisement for their marriage after Al-Arian separated from the singer Asala directly, as Nicole Saafan published , Pictures of her with director Tariq Al-Arian while they were together in Miami, USA.

“Nicole” commented on the photos through her account on the “Instagram” website, revealing a surprise by saying: “A year ago, like today in Miami.” Nicole said through her account on “Instagram” that Tariq Al-Arian was not happy, and the problems that occurred were the reason for his divorce from Asala She was not in a relationship with Tariq when he was married to Asala.

While Al-Arian also published another picture, which he collected with his two sons from his ex-wife, singer Asala Adam and Ali, on the walkway of the people of Egypt, which confirms that Al-Arian maintains his role as a father to his two sons and does not neglect his responsibility to them.

Tariq Al-Arian and his two sons

IPO: the Stock Exchange, in conjunction with its partners, strives to convince companies of its advantages