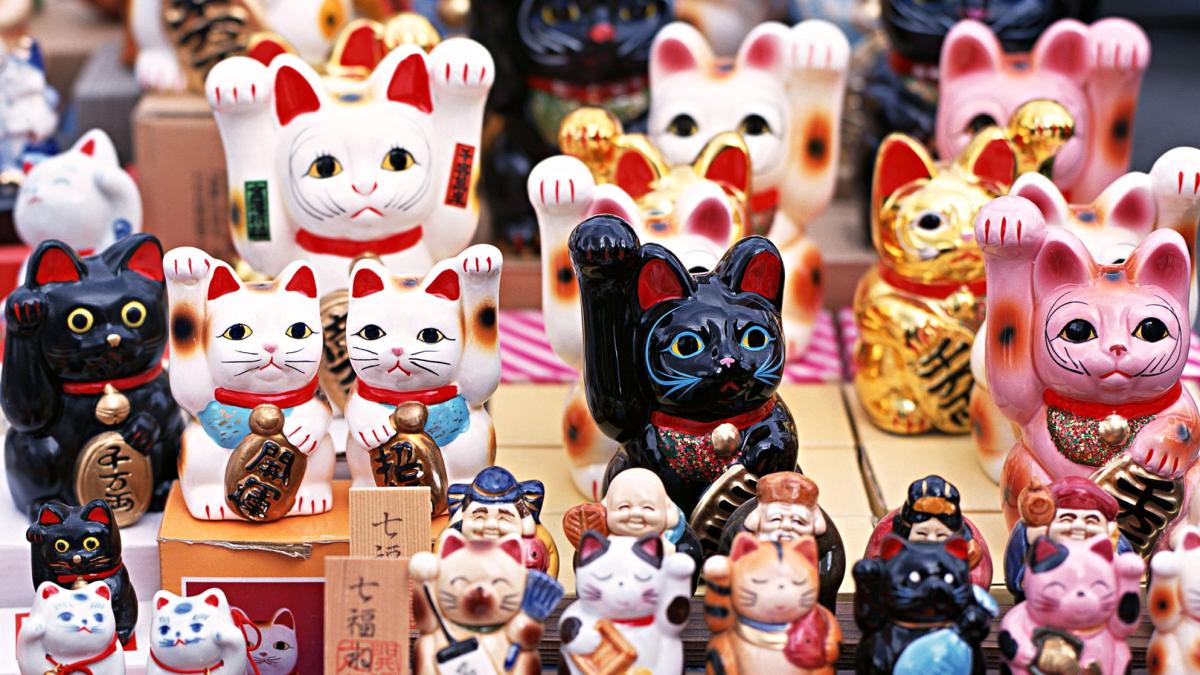 With the waving cat, it depends on the color

Whether in Japan or Thailand – small cat figurines with a constantly waving arm are widespread in Asia. Tourists love them as souvenirs. But not everyone should know the differences between the lucky charms.

EOne of the best-known souvenirs from Asia are the “lucky cats”, small cat figurines that are equipped with a constantly waving arm. Whether in Japanese Patchinko halls, Thai beach bars or, as has just been discovered, in the Chinese restaurant “Ming” in the Westphalian city of Oer-Erkenschwick – the waving cats are everywhere where people want money, happiness and good business.

The cute little animals are called “Maneki Neko” in Japanese, which means something like “waving cat”. They originally come from Japan, but you can now buy them in any better-stocked Asian kiosk in Germany.

The lucky house tigers can not only beckon luck and money, they are also able to wave impending misfortune. You just have to position it strategically at the entrance, preferably a little higher. And business is already up and running.

The color of the waving cat matters

In Japan the cats are traditionally made of white ceramic, battery-operated plastic cats come mainly from Thailand. Maneki Nekos almost always wear a red collar, a small green apron and a gold bell. Most of the time they have a badge with them that shows what wishes they should fulfill. In the case shown here, it’s very clear what it’s about – money:

The color of the hardworking cat also has a meaning. Tricolor it brings the most luck. If it is completely white, it brings purity. A black cat can ward off demons, gold provides even more wealth, red helps against diseases and pink brings new lovers.

The paw is also relevant. If she lifts her left paw, she invites customers and visitors, the right one brings prosperity. If the cat lifts both paws up, it will protect your house and business. In Japan, however, the paw lifting is perceived as too intrusive and impolite, which is why the variant has not caught on there.

The Maneki Neko is modeled on the Japanese cat breed Japanese Bobtail. This has a three-colored fur, small upright ears and a stubby tail. Around the year 1600, such cats were bred at the Japanese imperial court and later became the godfather of many cat figurines.

Today it is characters like Hello Kitty that refer to the Maneki Neko. The Japanese kitsch cat has been known for sparkling merchandising sales for decades.

There are so many different stories about the origin of the Maneki Neko that it is actually totally unclear where the waving cats really come from. One thing is certain: since the beginning of the Edo period (1603–1868), legends have been told in Japan about cats that bring good luck.

The Gōtokuji Temple in Tokyo is considered the birthplace of the Maneki Neko. An old woman lived there during the Edo period who was so poor that she could no longer look after her cat and had to give it up. One day the woman dreamed that the cat advised her to make cat figurines from clay in order to get so rich. And as the legend would have it, it happened.

In the Gōtokuji Temple you can still buy your own lucky cat and sacrifice it by placing it in a special corner of the building. Some people take their cat home with them and bring them back to the temple after their wish has been fulfilled. Discarded cats shouldn’t just be thrown away in the trash, but best left to burn properly in a Japanese shrine.

In case you are in Japan soon: On September 29th, the “Maneki Neko no Hi”, the annual beckoning cat day, is celebrated. The many celebrations are a good way to get rid of an old porcelain cat, which ideally has fulfilled all wishes, and to buy another one – for the plans to come. New cat, new luck.