With rockets blasting off almost weekly, space tourism growing, and plans to return to the moon within a decade, more scientists are concerned about the negative impact that Hot exhaust gases from rockets could hit the atmosphere from the ground to the far reaches of space. Indeed, rockets have been traveling through the atmosphere on their way to space for more than half a century, but until now the effect of their exhaust plumes on the atmosphere has not been a major concern. . Because rockets travel very fast, they only spend a few minutes in the atmosphere.

Therefore, their impact was considered minimal. Today, as private companies such as Elon Musk’s SpaceX, Jeff Bezos’ Blue Origin (Amazon), British billionaire Richard Branson’s Virgin Galactic and Rocket Lab, as well as space agencies in China, Japan, Europe and Russia are sending more rockets into space than ever before, scientists say it’s time to examine the long-term impact of all these launches on the atmosphere. 2021 was estimated to be a record year for rocket launches with 160 attempts and 146 successes. And again, these are just estimates.

Using a 3D atmospheric chemistry model, researchers from University College London (UCL), the Massachusetts Institute of Technology and the University of Cambridge examined stratospheric ozone and the climate impact of rocket launches. rockets, as well as the effects foreseen in the context of the race for space tourism in which the billionaires have embarked.

The results were shared in their research titled Impact of Rocket Launch and Space Debris Air Pollutant Emissions on Stratospheric Ozone and Global Climate.

The research team found that when rockets introduce soot – made up of black carbon particles – directly into the upper atmosphere, their heat retention is 500 times greater than the total of all aircraft soot sources, which has a much greater effect on the climate.

Soot particles from rocket launches have a much greater climate effect than airplanes and other land-based sources, so you don’t have to have as many rocket launches as international flights to have a similar impact. , said UCL associate professor of physical geography Dr Eloise Marais, who was co-author of the study.

Currently, the total loss of ozone from rockets is quite minor, but the projected growth of space tourism points to the possibility that the upper stratospheric ozone layer could be further depleted in the spring in the Arctic, as contaminants from spacecraft space and the warming caused by the re-entry of rockets are particularly damaging for the stratospheric ozone layer, according to the press release from UCL.

For calculation purposes, details of the chemicals from the 103 rocket launches worldwide in 2019 were gathered by the research team, along with reentry data of space waste and reusable rockets. Exhibits from Blue Origin, SpaceX and Virgin Galactic were also used, and the researchers created a future scenario of a robust space tourism industry. 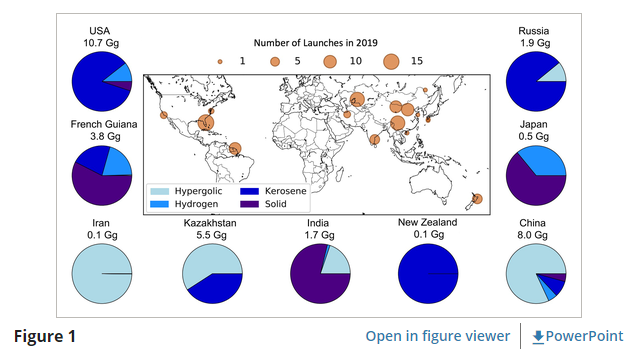 A detailed examination of the impact of modern space launches on the Earth’s atmosphere is crucial, given the boom in investment in the space industry and the anticipated era of space tourism. We are developing air pollutant emissions inventories for rocket launches and re-entry of reusable components and debris in 2019 and for a speculative space tourism scenario based on the recent billionaire space race. We include it in the global GEOS-Chem model coupled with a radiative transfer model to determine the influence on stratospheric ozone (O3) and climate. Due to the recent increase in reintroduced debris and reusable components, nitrogen oxides from re-entry heating and chlorine from solid fuels contribute equally to all stratospheric O3 depletion by contemporary rockets.

The team found that after just three years of space tourism rocket launches, the heating caused by the extra missions was more than twice that of today’s rockets. This is due to the synthetic rubber hybrid fuels used by Virgin Galactic and the kerosene used by SpaceX.

These results demonstrate an urgent need to develop environmental regulations to mitigate the damage caused by this rapidly growing industry, the researchers wrote.

Researchers also found that the effect on the stratospheric ozone layer of regular daily or weekly rocket launches associated with space tourism could jeopardize the recovery resulting from the implementation of the Montreal Protocol – a 1987 ban on substances depleting the ozone layer, the UCL press said.

The only part of the atmosphere showing strong ozone recovery after the Montreal Protocol is the upper stratosphere, and that is exactly where the impact of rocket emissions will hit hardest. “We didn’t expect to see ozone changes of this magnitude,” said Dr Robert Ryan, a researcher in the UCL Department of Geography, co-author of the study, as the press release states. This study allows us to enter the new era of space tourism with eyes wide open to the potential impacts. The conversation about regulating the environmental impact of the space launch industry needs to start now so that we can minimize damage to the stratospheric ozone layer and the climate.

Another study had already sounded the alarm

In May, the results of the study entitled Atmospheric pollution from rockets were published. It was led by scientists from the University of Nicosia, Cyprus, Ioannis Kokkinakis and Dimitris Drikakis. They modeled the effects of chemicals and heat released by rocket exhaust up to an altitude of 67 kilometres. The researchers said they found there were significant effects on the Earth’s climate. They compared these results with data from the World Health Organization (WHO).

The rocket used for the model was SpaceX’s reusable Falcon 9 rocket, which regularly makes space trips to deliver satellites into orbit, as well as to transport cargo and crew to the International Space Station. It’s not the largest or the smallest fuse, making it a good average example of fuse flight. It only takes about eight minutes for the rockets to get into orbit after a stopped start. In fact, one of the reasons they rise directly from the launch pad is to cut through the air as fast as possible to reduce drag.

But in that short amount of time, they burn tons of fuel. The Falcon 9’s nine engines burn RP-1 fuel, which is a refined version of kerosene-like kerosene. As it is a fossil fuel, it produces carbon dioxide, a greenhouse gas, in its exhaust gases. The researchers found that the amount of carbon dioxide released when the rocket climbs one kilometer into the mesosphere is equivalent to that contained in 26 cubic kilometers of ambient air at the same altitude.

Another aspect of rocket flight is the effect of the heat and pressure of the exhaust plume on the surrounding air. Researchers have found that this can directly heat the atmosphere, possibly affecting ozone, and producing nitrogen oxides, pollutants harmful to human health. Currently, these gaseous nitrogen oxides created under high temperatures at lower altitudes are carried by winds aloft, so impacts are temporary at higher altitudes. But scientists fear that the predicted increase in rocket travel in the future will have a cumulative effect.

These results suggest that there is a need to further study the reaction of the atmosphere at all altitudes and to consider the future design of rocket engines and alternative fuels to minimize their impact. According to the authors of the study, one of the possible changes is to use liquid hydrogen instead of kerosene in order to eliminate carbon emissions, although this solution has its own set of difficulties, because the fuel is very cold and difficult to handle.

But researchers point out that rockets of the past, such as the main engines of space shuttles and the upper stages of Saturn V moon rockets, used this fuel with great success. For decades, rockets have transported people and goods off the planet; now is the time to reflect on what they leave behind, the researchers concluded.

Jeff Bezos appreciates your efforts for making his dream of space travel come true, as netizens compared his rocket to that of the movie villain Austin Power

Richard Branson thinks the key to success is a three-day work week, and adds that advances in technology should fully support the transition

Aldo Miyashiro ‘blocks’ a reporter in pichanga VIDEO: “If they don’t let you go to soccer it’s because you’re a jerk” infidelity Fiorella Retiz entertainment | SHOWS