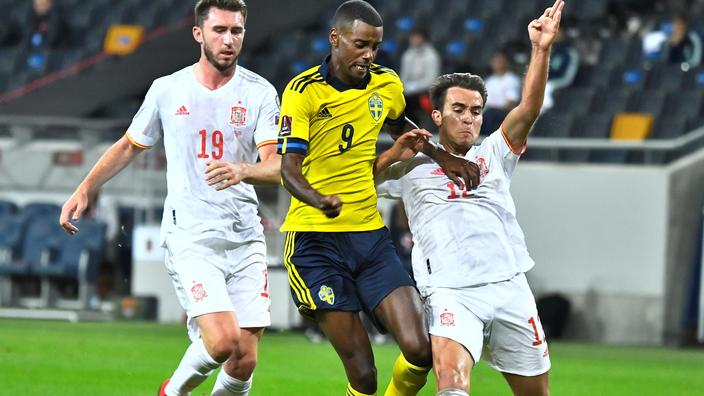 In the shock of the evening, the Spaniards, semi-finalists of the last Euro, lost to the Swedes (2-1), on the occasion of the 4th day of the qualifiers for the 2022 World Cup.

Back to reality: after the enchanting parenthesis of the Euro, where it climbed to the semi-final, Spain was showered by the young Swedish attacking duo Alexander Isak-Dejan Kulusevski (2-1) on Thursday in Solna as part of the qualifications for the 2022 World Cup in Qatar.

After the initial ping-pong, which saw Alexander Isak (6th) answer the tac-au-tac at the opening of the score of Carlos Soler (5th), it is Viktor Claessen who delivered his own to Solna (north- west of Stockholm) by scoring the winning goal in the 57th, on a superb pass from young Juventus Turin winger Kulusevski (21). With this setback, Spain cedes its first place in Group B to the Scandinavian selection, which has one game less.

The last Spanish defeat in a World Cup qualifying match dated back to 1993 (1-0 in Denmark). A terrible return to earth for the selection of Luis Enrique, who seduced Europe this summer with his ardor, his youth and his game of possession. While the first meeting of Group E of Euro between these same two nations had resulted in a sad 0-0 and an incalculable number of missed opportunities on the Spanish side, Thursday, their reunion did not offer the same spectacle.

Sweden did not spend the game defending, and played their luck at home, taking advantage of the speed and talent of their offensive assets: Alexander Isak, the 21-year-old center-forward whom the Spaniards have known well since his arrival at Real Sociedad in 2019, and Dejan Kulusevski, the Juve winger who is no longer to present. La Roja, conversely, found the same ills as at the start of the Euro. She managed to get some good chances – although fewer than in Seville – but kept stumbling against Swedish goalkeeper Robin Olsen.

Like the big opportunity missed by Ferran Torres after returning from the locker room (49th), or the shot stopped by Adama Traoré (68th). And Alexander Isak could have driven the point home, if Aymeric Laporte had not signed a heroic comeback in the 79th, with a tackle as dangerous as it was successful in his own area, in the feet of Isak.

Isak and Kulusevski were warmly applauded by their audience as they left in the 85th minute. The selection of Luis Enrique will have to correct the shooting against two opponents much inferior on paper: Sunday (8:45 p.m.), the Spaniards face Georgia on their soil, in Badajoz, before going to Kosovo on Wednesday.

There will be a total of 6 games left for the Spaniards to try to regain first place in Group B, the only ticket that offers a direct qualification to Qatar.