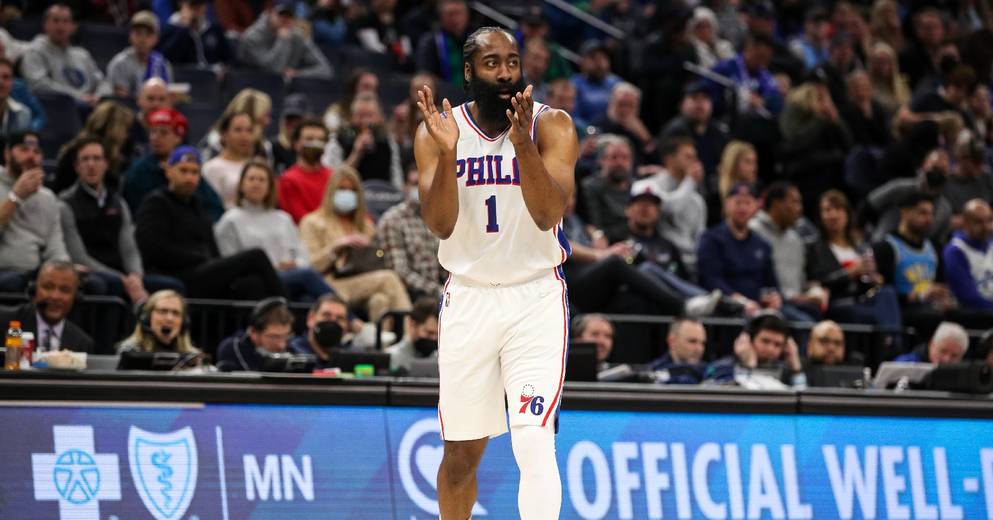 LOS ANGELES – James Harden responded perfectly to his debut for Philadelphia on Friday by being a great architect of the Sixers’ 133-102 victory over Minnesota.

In the West, leader Phoenix fell to the New Orleans Pelicans, 117-102.

Harden, MVP 2018, scored 27 points and delivered 12 assists in his first game since his resounding transfer from Brooklyn where he had only arrived for a little over a year, a few hours before the end of the transfer window and in Ben Simmons trade.

Affected by a hamstring injury, he did not take part last weekend in the All-Star Game, but largely made up for it on Friday with a sizeable offensive performance.

What cause the admiration of his new teammate Joel Embiid (34 points).

“He played for all of us. His ability to shoot, to create the chances to do that, you should have seen my face… We’ve never had that, nothing like it.”

“We have a common goal. I have nothing to prove individually but as a team, we have something to do,” reacted Harden, who hopes with Philadelphia, 3rd in the Eastern Conference (36 wins) join in the fight for the first place shared by Miami and Chicago.

The day after the Bulls’ victory over Atlanta (112-108), the Heat responded with a 115-100 success on the floor of the Knicks, still deprived of Derick Rose, recovering.

The latter, back after four missed games due to injury, offered six three-point shots and 9 rebounds, insufficient to avoid a fourth loss in a row, while Julius Randle lacked efficiency (11 points, 2 successful shots out of 15).

– The Lakers too short –

In the West, the surprise of the night took place on the side of New Orleans where the Pelicans, 12th in the Western Conference, won ahead of the leader Phoenix 117-102 and ended a series of 8 victories for the Suns.

CJ McCollum led the team with 32 points, supplemented by 28 from Brandon Ingram and 18 from Jonas Valanciunas.

The Pelicans are as successful as the Spurs who won in double overtime against Washington (157-153), thanks in particular to 31 points from Dejounte Murray, who had his first All-Star Game last weekend.

Extension was also discussed between the Thunder and the Pacers. Shai Gilgeous-Alexander, back from a sprained right knee, scored 36 points including a decisive free throw to give Oklahoma the victory 129-125.

For their part, the Lakers let slip the victory against the rival of Los Angeles, the Clippers 105-102.

Lebron James’s men, who have won just three of their last 10 games, had nevertheless come back from a 16-point gap and were trailing just one unit with four seconds remaining when Carmelo Anthony missed a shot at three points.

James also missed his attempt late in the game, ending the move to 23 games with at least 25 points scored.

Russia-Ukraine conflict: How much is freedom worth?

Tesla announces the inauguration of new Superchargers in Morocco